So I came into possession of this tucked into a huge record collection of classics rock and pop, from the 60’s and 70’s, and I’m looking at it this handwriting on it which I didn’t notice before. I got a chill when I read it: “does the lamb cry out before we shoot it dead. yes! when we find out it’s not a lamb”

I think that’s kind of odd but not in the context of the body of work of Bob Marley. Sounds like something he’d say or write.

I have compared it to many examples of his writing and I’ve seen some striking similarities with certain letters or combinations of letters, plus it runs from cursive to lower case print, something Marley did.. a rather haphazard style of handwriting but the sample aligns with that. I’m hoping someone could corroborate my suspicion that this was written by Marley. Two lines of prose, no signature (and I apologize if I’m breaking decorum discussing a non-signature writing sample) I’ve picked out a couple things to support my case, can anyone weigh in? Or any advice on whether this can ever be authenticated or is it just a vintage poster 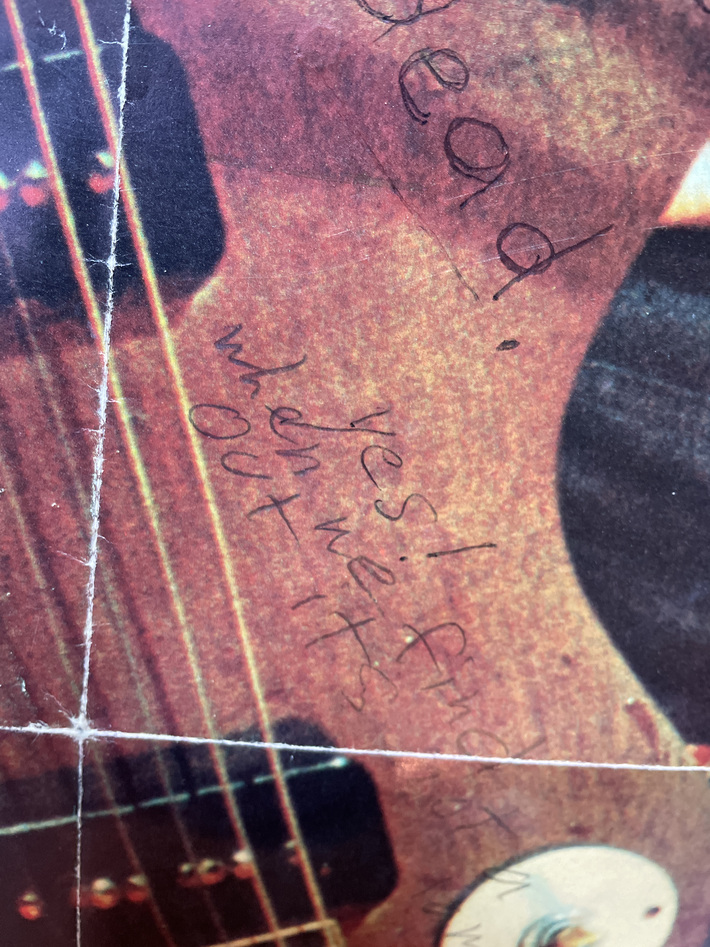 Particularly the ‘w’ in we.. I apologize for the photography

I moved this discussion to the "Is this autograph real" forum where it's likely to get a greater response.

It appears some of the writing has been traced over. Is that correct?

Yes not traces but written multiple times on the same occasion because of a faulty pen, or perhaps the poster wasn’t on a stable surface.. it seems that they started out writing cursive, and had to write it one or two more times to make it legible, then abandoned the cursive for the print. I suppose a closer examination could determine if it was all done with the same pen, and roughly the same time

I’m not a Marley expert, but, from the examples I’ve seen, this doesn’t look like his handwriting.  Just my opinion.

The quote, “Does a lamb cry out before we shoot it dead,” sounds vaguely biblical, but it actually comes from the song “The Ancient (Giants Under the Sun)” by the English prog rock band Yes.  The song was released on their 1973 album Tales from Topographic Oceans.  That explains the “Yes!” exclamation that follows the quote.  Now, I don’t know if Bob Marley was a fan of Yes, but it seems unlikely he would quote their lyrics on his own poster.

The poster itself, btw, was given away with early copies of the 1975 album Live!

Good points, and it’s very intriguing that someone would write that Yes lyric on a poster, but I agree it doesn’t point to (or away from, maybe he was a fan) Mr. Marley. But by my reading the ‘yes! When we find out he’s not a lamb’ doesn’t refer to the pro-rock band, but answers the question emphatically in the affirmative.
thank you for your perspective, it’s illuminating

In a literal sense, the “Yes!” exclamation answers the question posed in the previous lyrical quotation.  But it’s clearly a semi-covert reference to the prog rock band.  Whoever wrote it thought they were being terribly clever by referencing the band in plain sight, but in such a way that only someone familiar with their work would pick up on.

I still don’t think that person was Bob Marley.  Nor do I believe that this was written to intentionally deceive a music memorabilia collector 40-plus years down the line.  Most likely it is the idle scribblings of a sophomoric pothead.  Simple as that.

When assessing any signed/personalised item, I always encourage people to look at the item as a whole, not just the writing or signature, and ask themselves, “Does this make sense?”

In this case, can you imagine a realistic scenario whereby Bob Marley was presented with a poster of himself, but, rather than simply signing it, perhaps adding a quote from his own work, he instead chose to add a quote by another artist working in a musical genre far removed from his own?  I can’t see it happening.  Without provenance, or a compelling backstory, there’s no reason to suppose Marley would ever do such a thing.  You can try to convince yourself otherwise, but you’ll have a hard time convincing serious collectors, or any reputable auction house.

I quite agree, and I am not prone to delude myself by deciding it’s one thing and contorting all evidence to that conclusion. I will confess to letting my imagination leap ahead of my reasoning, and I’m still doing some digging on the provenance, I’d like to know the story if only for my own edification.

Authenticity is everything, I read somewhere. I would never try to defraud anyone or pretend to have something that hasn’t been authenticated by a reputable expert, or has a first-hand account of it’s authenticity. I’m no expert, certainly, so I assume nothing. As you say, it could easily be the musings of a pothead, which it’s fair to say Mr. Marley was, though sophomoric he was not lol.

Roger Epperson is the best I know at Marley. You can get an online opinion for $15.