Bob Marley - what do people think about these?

Any opinions on these Marley's (single and LP)? No provenance. Both seem plausible but I am still sceptical, especially about the LP (second image). 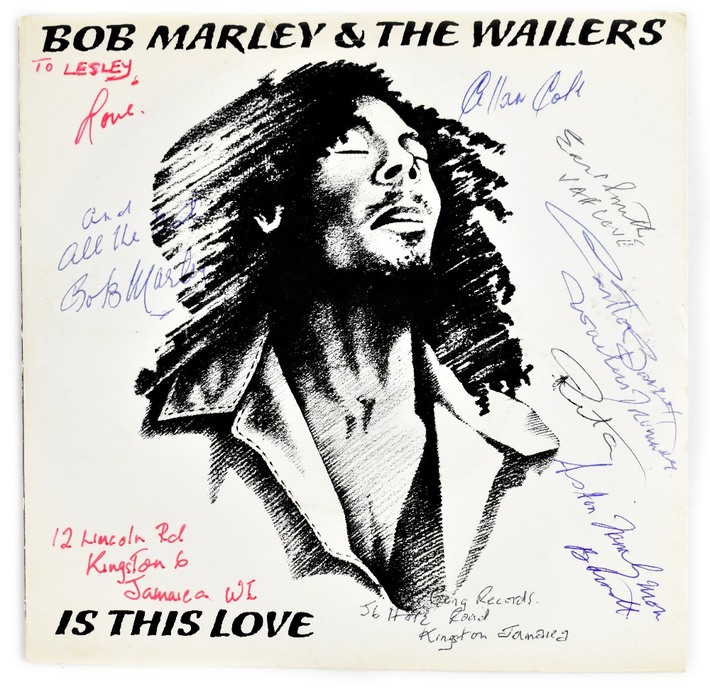 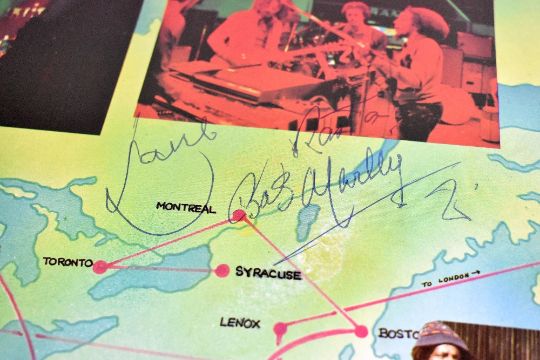 I have tried to tell many auctions houses that their Bob Autographs or info isn’t right and I never gotten one positive response. I even explain I was a historian curator at the estate for a few years and they just seem not to care. I not going to get in to a argument with them it’s not worth my time.

Johnlow, it really is quite frightening to hear of auction houses not listening to you. The RR Auction single was supposedly authenticated by Tracks. I don't really know why Tracks would be the "go to" authenticators for Marley anyway given that they are specialists in Beatles autographs. Maybe they sold it to the vendor or were selling it themselves through RR.

"Amazing Island Records 45 RPM single for 'Is This Love / Crisis' by Bob Marley & the Wailers, signed on the front of the sleeve in blue or black ballpoint, "Rasta Love, Bob Marley," "Earl Smith, Jah Love," "Love Always, Judy, xxx," "Carlton Barrett, Wailers Drummer," "Rita," "One Love Marcia," "Aston Family Mon Barrett," "Best wishes from, Tony (Road Manager)," and "Allan Cole, Tuff Gong Records, 56 Hope Road, Kingston, Jamaica, don't forget to write to us." Collector's notations to reverse of sleeve indicate that the signatures were obtained at London's Rainbow Theatre on June 3, 1977, during the band's Exodus Tour. In very good condition, with light soiling, moderate creasing (heaviest to the bottom right), a trivial area of surface loss, and partial separation along the bottom edge. The record is included. Accompanied by a certificate of authenticity from Tracks. Released as a single for the 1978 album Kaya, 'Is This Love' became one of Marley's biggest international hits and is now perhaps best known as the opening track to 1984's landmark compilation album Legend, the best-selling reggae record of all time. An incredible offering that boasts a total of nine vintage signatures dating to Marley's self-imposed exile in England and a month before he was diagnosed with a form of malignant melanoma."

At a minimum the "collector's notations to the reverse" must have been wrong if the single wasn't released until 1978. To my eyes the Marley autograph looks a bit odd anyway.

I wonder how the Tracks certificate works when an item bought from them is sold on and later found to be fake. I presume they would only refund the person who bought it from them and for the amount they paid.

actually that is bad tbh.  I think the refund only works for the original buyer.

I don't suppose RR would be liable either unless they issued a certificate of authenticity. I thought they offered this service for a fee as an add-on but I don't see it offered in these auction particulars.

plus the refund would be kind of large

gosh I have just seen the price it fetched at r and r auctions.  Which  uk auction house sold the other 3 Pug?

Adam Partridge believe it or not.

Oh I would believe it.  His auction house sells loads of fake autographs and he is one of the auction 'experts' on a popular tv antique show over here

I forgot another reason why i was suspicious. None of the three listings had any provenance except that they had come from one long-term collector.

These companies who write coa's ?