Dear PSA....You Should Be Ashamed

This is on eBay right now with 13 bids. This is disgusting and has completely impeached the credibility of PSA. What a complete and utter sham failure. I have repeated many times. Don't trust authenticators. They are in the business of business and authentication is secondary. I would only buy an autograph when I'm about 95% sure. Authenticators must be anything over 50%. When they are authenticating for auction houses they they can't afford to be fussy in the answers they give or the auction house will find someone more forgiving. Don't trust them, period.

Has you noticed that these TPA companies, based upon what is being offered at auctions these days, seem to be getting sloppier and sloppier as time goes on?   Even the auction houses that have had fine reputations seem to be handling what looks like highly suspect material that is "pre-certified".

I'm certainly not an expert authenticator. However there are a few signers that I am pretty familiar with and some of the material passing through looks really off to me.

i think beckett is fairly good with modern signatures. but with older signatures from the 70's and earlier, the odds of them getting it right go down considerably.

I don't agree with that on most of them put business first. I have seen them all take time on things in effort to get them absolutely right.

I was talking to Steve Grad years ago about a super-rare early-20th century baseball photo. He said he had it for weeks, maybe a month or more (I forget, it was at least 7 years ago, maybe 10), studying it and studying, because he thought it was real but it was one you would never expect to see on a signed photo.

Roger takes the time he needs to get it right in his opinion, too. As does every reputable authenticator I know.

This is my Griffith - thoughts on it? 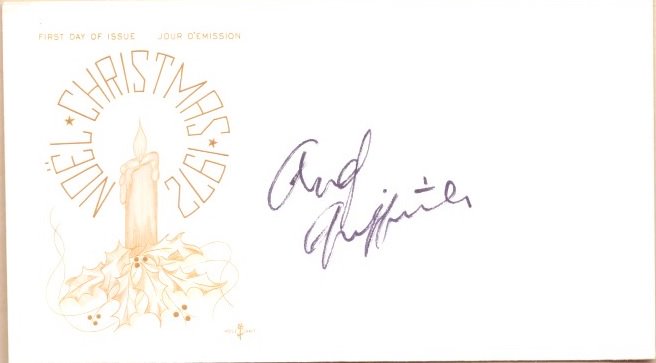 Assuming it’s not a print, it looks great to me.

PSA DNA...a joke...I have had autographs that I collected in person rejected, but they sell their own of the same celebrity that looks like real.  Their lead guy STEVE Grad was fired for authenticating anything that came across his desk....a Mother Teresa signed baseball and he was busted by Charles Lingburghs daughter for a signature he authenticated that was nothing like her father's......and so many more...now he is at Becketts I believe doing the same....he was even featured on Pawn Stars at one time....you can look him up on line here is a link to his firing: