Ebay Is A Cesspool Of Mickey Mantle Forgeries

Here is the most recent link to that search:

It shows that over 75% of the "Sold Listings" are Mickey Mantle forgeries.

The majority of those are with COAs from GFA (Guaranteed Forensic Authenticators headed by Stephen Rocchi).

This shows how difficult it is sell an authentic Mickey Mantle autograph on a photo at a decent price.

It also shows just how heavily populated Ebay is with wannabe autograph collectors (who fall for that "Forensic" BS) and suckers who are lured in by the cheap framing (Lipstick On A Pig).

Here are some Ebay screenshots from that "Sold Lists" search.

It seems to be same Ebay sellers who over and over again continue to list and sell Mickey Mantle GFA-certed forgeries: 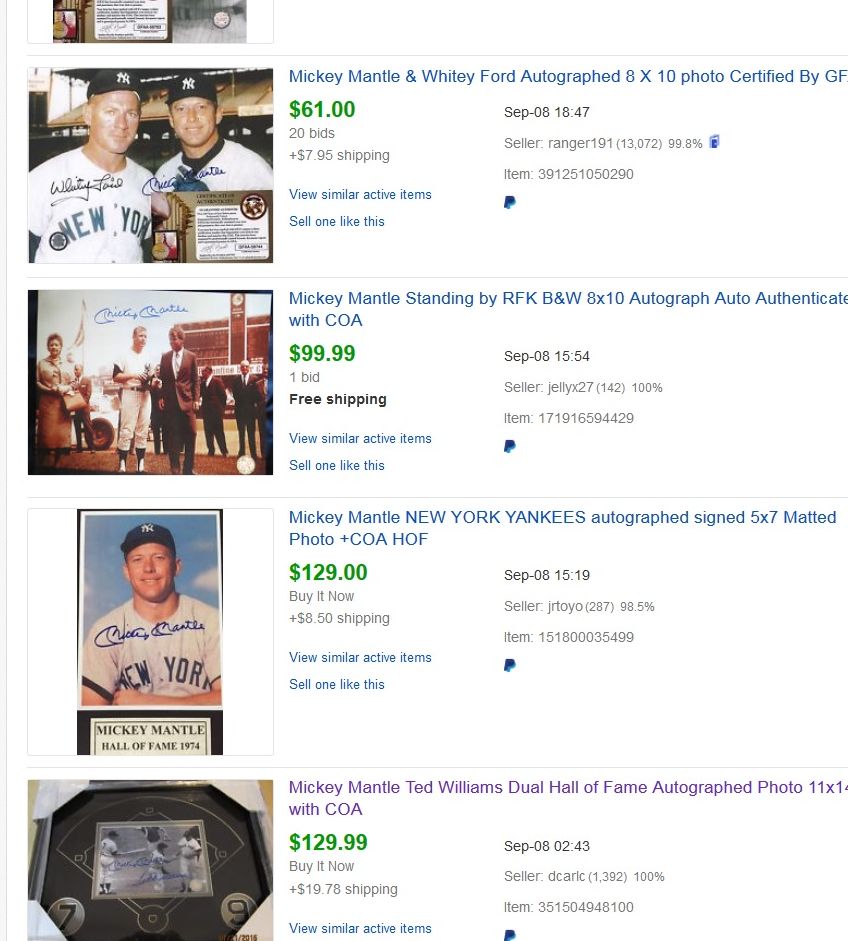 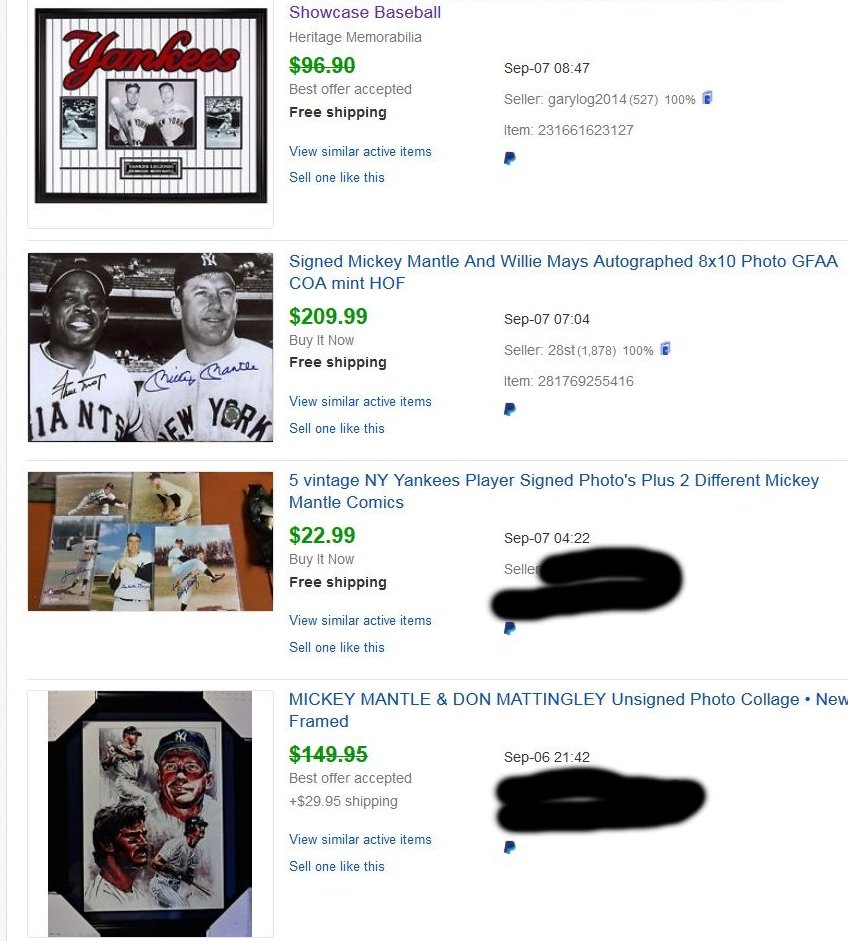 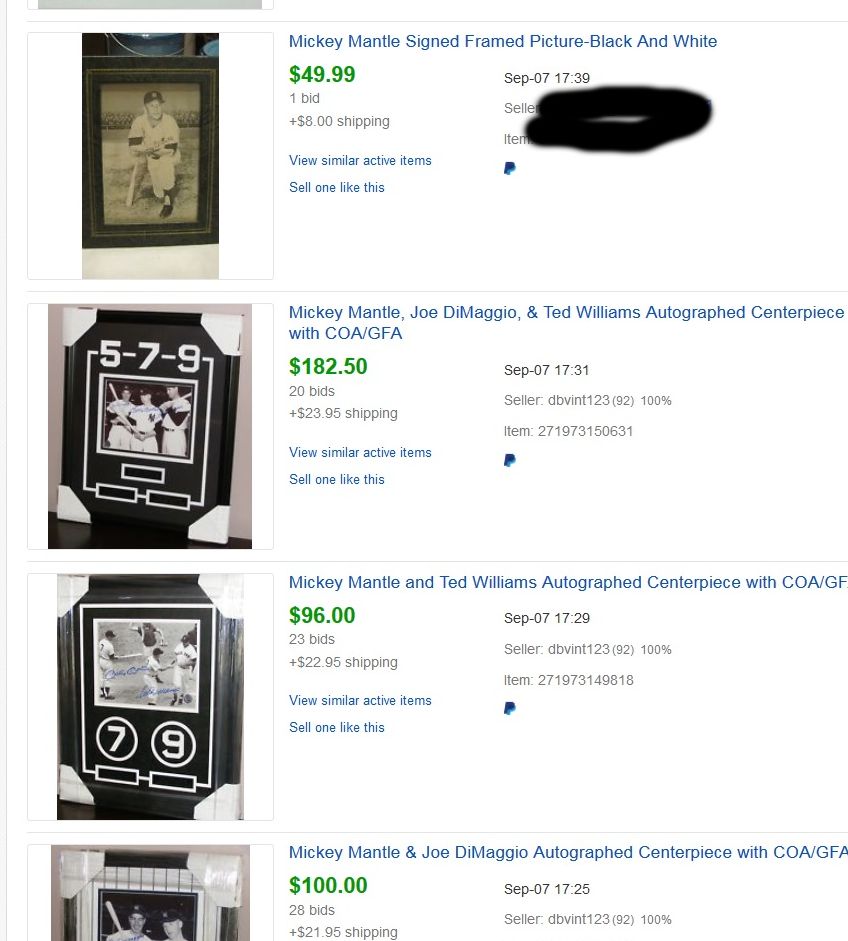 Permalink Reply by Steve on September 13, 2015 at 10:33pm
Terry, many people on this site are doing yoemans work behind the scenes. I recently had an interview on the news that was picked up by a station in another state (not sure where else). I mentioned our site and all the dirtly little crooks who take advanatge of the uneducated. Another set of interviews with more detailed information will be in the future. We are doing our parts, little by little, to try and make a difference. Please don't make a generalization just because you are not in the know.

dear Terry G. NEWSFLASH...YOU WILL NEVER FIND A LEGITIMATE autograph with the GFA COA...it's because there are NONE it is obviously a SCAM... I seriously do not find ONE. What is it about that you don't understand?

A person with half a brain will google Mickey mantle forgery and maybe get in to many links on this website to investigate the signature and truth on their own. It's pretty damned easy if you put just a sliver of EFFORT. So, I guess we are posting here so idiots can help themselves IF THEY WANT TO. Sadly, there is a reason why they are idiots in the first place. I hope that answers your question?

Nobody should ever infer "tone" from printed words-it's rarely accurate. I have not made any generalizations regarding Mr Williams skills nor abilities. If you do not understand what I have posted, it would be a wise move to not post a scathing rebuttal to it.

For the record, what I asked was simply what is Christopher doing about this? Again, I'll point out that this site is rife with post after post about forgeries found elsewhere and claims of expertise regarding them. I've read posts here demeaning other authenticators, which only fans the flames of the virtual non-stop authenticator wars we've had for over a decade plus- something that HURTS this hobby as much as forgeries, IMO. When the general public, or as fudd calls them, the "idiots", do not have a reliable source from which to assist them in determining a safe step in a purchase, then it propagates the probability of forgers profiting. As Steve stated, he made an appearance and mentioned this site-so what is the very first thing a newbie sees when they come to this forum? Posts about fakes, posts about forgers, posts about crooks and questions about whether something is real or not. And frankly, a ton of "experts" answering those questions, without formal documentation of their credibility in regards to forming that opinion. In other words- little to no help at all.

Steve, please do not assume that I am not in the "know". I am. I've been in this hobby for over 40 years. I've collected thousands of authentic autographs in person, with an emphasis in sports and music. I was an subscriber to the magazine, as well as many others that covered associated topics of the hobby. I know much about the issues with this place and other websites, as well as the disgusting infighting between authenticators that has done so much harm. While I appreciate you (and others) doing things "little by little", given the numerous posts on this very site, it appears that you are not even close to treading water on the problem. Perhaps it is an issue of not enough bullets and manpower to make your point...

To sum up-again, I ask what can WE do about this issue instead of posting pictures & opinions to a low traffic website non-stop? With a collected membership of  over 7000, doesn't that grant a certain amount of power for an issue of this type? Would not a well-written letter (not an email), detailing the PROVEN issues with an eBay sellers products, signed by multiple certified authenticators as well as 7000+ people (seen as potential customers by eBay) accomplish much more than whining about it daily it here? For a auction site that claims to protect it's customers, the possibility of a public scandal powered by 7000+ people would hold sway, IMO.

Yes, you can take the ego route and feel that people come here as a reference-but lets be honest- few do. Yes, you can have the opinion that posting pictures here will help someone make a buying decision- but it won't if that person isn't a reader here. Yes, you can make claims of expertise in the field but without documentation and proof, it's almost meaningless. That's why I feel that getting the authenticators together is one of the most important steps we can take in fighting this issue- once we can claim to have real authorities grading these signatures, not fly by night crooks, the public can grasp onto that and use it as an educational tool. This is exactly why PSA is so powerful-they were the first, they were the biggest and they have brand name recognition (just like eBay!). I'm not here to argue whether they are the best or not-EVERY authenticator makes mistakes, Christopher included, and I hope he would be open to admitting that.

I'm not taking digs at any authenticator here, nor elsewhere- I don't use them, so I have no reason to do so. But I do see their value to the public, and i do see how a place like this can be (one of MANY) useful tools to educate, if done properly. But frankly, when a newbie comes here and all he sees is thread after thread about fakes and crooks, I wonder if he just gives up because he feels that there is no way to obtain a real autograph with his hard-earned money. If you were thinking of buying a Jaguar, and went to a site all about them, and all you read was negative this, bad that, repairs, broken, expensive, etc, would you not be turned off on Jaguars? I know i would...

Nicely put Terry, I wish I could do more. Calling the police hasn't helped. letting E-bay know and cancelling my account on a recorded line didn't help. calls to the FBI don't help.

It just frankly a sick and broken hobby. I see what I see in these autographs because I have done just a little bit of work when I used to enjoy this hobby. This scam is particularly under my skin because to anyone who does a weeks worth of work looking at Dimaggio, Mantle and Williams can easily call these putrid fakes. Others at just a glace, probably not. I can do this at a glance. it's that easy. But people have to want to help themselves. Maybe if more people called the police or contacted and closed their e-bay accounts, something might get done. But then again probably not. I urge anyone who has been ripped off to follow through with your complaints to the appropriate source. Short of that, most "idiots" LOL don't mind being sheared like a lamb evidently.

Your are right on with your Jaguar analogy. I stopped 1-2 years ago and quit e-bay last month. I will probably never buy another autograph as long as I live.

I try to share my knowledge on this board when I can. It's really all I can personally do.

Permalink Reply by GraphingMlb on September 19, 2015 at 12:53pm
I find it sad that I've picked up some authentic nice pieces for less than some of these forgeries