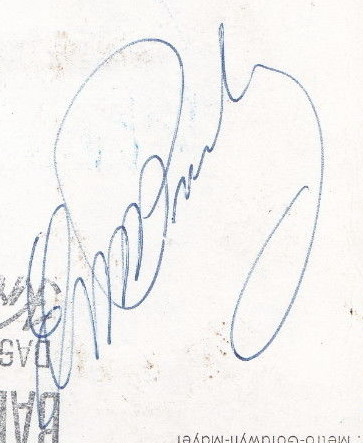 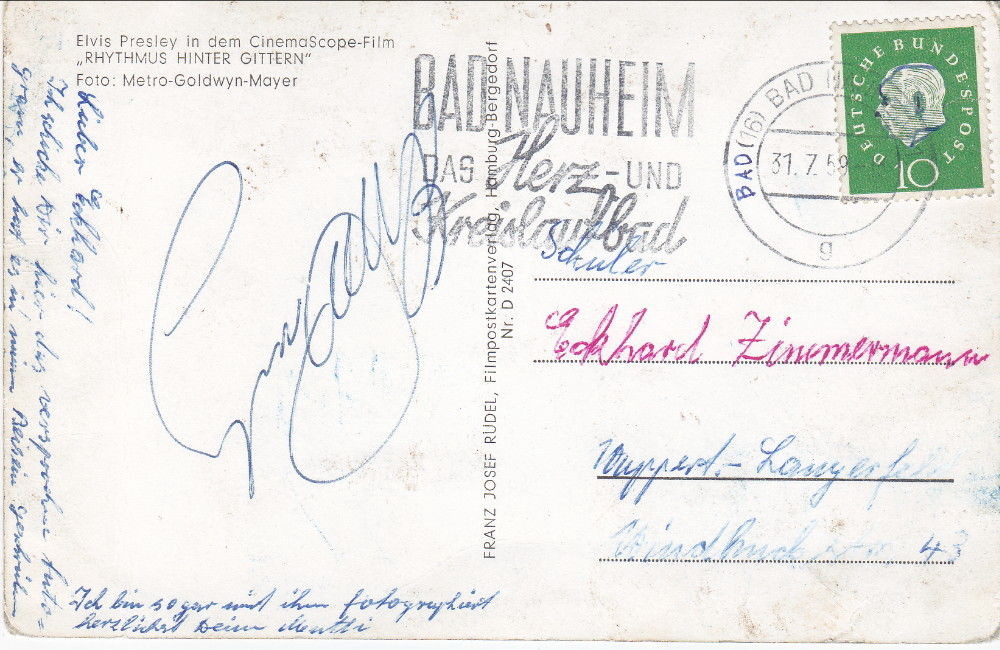 This is a nice postcard. A mother met Elvis at his home in Bad Nauheim in Germany to get the autograph for her son. She sent it back to him and telling him so on that postcard. How on earth could the authenticity of this one could be denied by Epperson - when he was asked by a friend of mine? (I know Eivis signed a bit different - sloppier - in Germany due the large number of autographs - but this document is perfect.) Does anybody believes the mother was a perfect faker in 1959?

I've told this story before, but I'll tell it again. My friends mother was a hairstylist. She worked with a woman who was really old, and told a story about Elvis. He had come in for a haircut. An hour later, a guy called and wanted to know if Elvis' hair was still on the floor. It was, and he said he'd buy it. He was on the phone, and said he'd be there in 30 minutes. She swept it all up, and he gave her $500 for the bag of it.

Well, he called back a few hours later, asking if he got it all. She said yes. But a few days later, a different person (she thinks) called to ask about Elvis hair. He offered her a few hundred dollars for some, and she said "Okay, come on by."

So, what did this lady do? She got black hair she found on the floor in clumps, bagged it, and made a few hundred dollars. That guy asked if Elvis often came in there. He was only there once, but she said, "Yeah, once in awhile." He said, "Next time, save his hair, and call me at this number, and I'll buy it."

So, every few months she called this guy, with black hair (never Elvis, as she never saw him again), and she made thousands doing this.

Now, guess what? That woman is now dead, but there was a time she was a sweet, little old lady. People could say "Why would she lie? Why would she go thru such lengths? She has a picture cutting Elvis' hair, it has to be real."

They can be sweet old ladies...or guys that can write in German...forgers and people that want to make money, will do ANYTHING.

And...let me add something to all of this. What in the world...do you think Roger Epperson has to gain by poo-pooing an autograph? What does he gain by having RR refuse to sell it, or authenticate it?

I know what is possible - but think about:

2. pay several hundreds of USD do clean the card from the previous handwriting by a professional restaurer

3. then you have to add a perfect Elvis on top

4. to finish you must add a handwritten story on the card

5. and with this effort you might win a few bucks after all your costs.

I have no doubt that Roger has seen a lot and I have no doubt that there are good fakers around. In addition there are so many Elvis signature styles around who might fit with that Bakker guy. I know that most US experts doubt most of the German Elvis autographs because due the large amounts of autographs he gave they look a bit different than the ones he wrote before (younger!!!) in the States.

If you think about the cmplete story above - the doubt is ridicolous.

Permalink Reply by Andrew Alderton on September 9, 2016 at 12:52pm
All you would have to do is find an old blank postcard (In this case Jailhouse Rock) the postmark could easily be faked. why do you think you would need to erase existing handwriting? Just buy a blank post card and write up a story add a fake Elvis throw in an old stamp and a fake postmark and bingo your done. A good forger could whip one out in less than an hour if they know what they are doing.
I am no Elvis expert (but I do have one) but questioning Roger is the equivalent of going to your Doctor he tells you what is wrong and you argue with them and tell them they are wrong and don't know what they are saying. Why do you think auction houses and authenticators go to him? Because he is the best! Years of doing it and the man knows what he is talking about. It is quite obvious a forgery in his eyes and I along with many others agree. I know it's not what you want to hear but if one of the top experts in the world tell you it's fake You should believe it!

Permalink Reply by Thorsten Knublauch on September 9, 2016 at 1:04pm

Ok - if you all want to believe that someone is faking 2 stampers and a signature that is written upside down - I am giving up.

I can repeat myself - Elvis was around each day for half an hour signing autograps and I knew someone who had around 50 autographs by Elvis received over several weeks when the kid was on a childrens cure opposite Elvis house.

Permalink Reply by Andrew Alderton on September 9, 2016 at 1:19pm
So what? He signed thousands of them. But one of the top Elvis authenticators is telling you this is not real why is it so hard to believe? Muhammad Ali and Babe Ruth signed tens of thousands of autographs in their lives. These two guys may have signed more than anyone in history. There are many real genuine signatures of these guys out there. Then why are they so often forged? Because people want them and there is money involved! same with Elvis. Just because Elvis signed everyday while in Germany (perhaps hundreds a day) does not change the fact that the one you are showing is not real according to Roger Epperson.

Sorry, I am not in US but I also think your autograph is fake (in my opinion).

If you doubt Roger opinion, get a quick opinion from PSA/DNA or Rich Consola.

Permalink Reply by Thorsten Knublauch on September 9, 2016 at 10:28am
Read what i wtote above and forget it is forged.

Permalink Reply by Thorsten Knublauch on September 9, 2016 at 2:06pm

Very simple. This might be a signature that is not 100% that some people are used to it (and don`t forget all these German autographs were signed while standing or leaning on the wall of his house surounded by a crowd of kids) and so one needs to construct the theory that EVERYTHING ELSE must be faked aswell. From the 2 stampers, to the stamp, the story etc...

To proof the theory of the faked postcard, stamp etc. one needs to have the original in hand - not just a scan.

The experts in Germany have a different opinion to the subject. No problem.

Thorsten I would add to this discussion that I too don't like your signature.

And I will suggest this...if you take the time to send it to Mr. Rich Consola...and you only need send him the images through email...he would tell you the very same thing that Roger is telling you...that it is a very slick effort to fool people.

The creators have made this look a bit elaborate...they've gone the extra kilometer to dress things up here but that does not change the hand writing.

Permalink Reply by Thorsten Knublauch on September 9, 2016 at 2:23pm

Thanks - it is not my signature. I just needed the opion for a friend. I don`t have more than this scan.