this is one horrific Munson forgery that the seller has included a separate photo of the Halper Collection catalog, to fool people into thinking these are related.  Unbelievable.

u can get it here http://www.amazon.com/Barry-Halper-Collection-Baseball-Memorabilia/...

RB, here's an example of a Mickey Mantle autographed baseball that was sold by Shop At Home TV back in the 1990's.  It is a forgery and Shop At Home sold hundreds of thousands of dollars of crap like this. 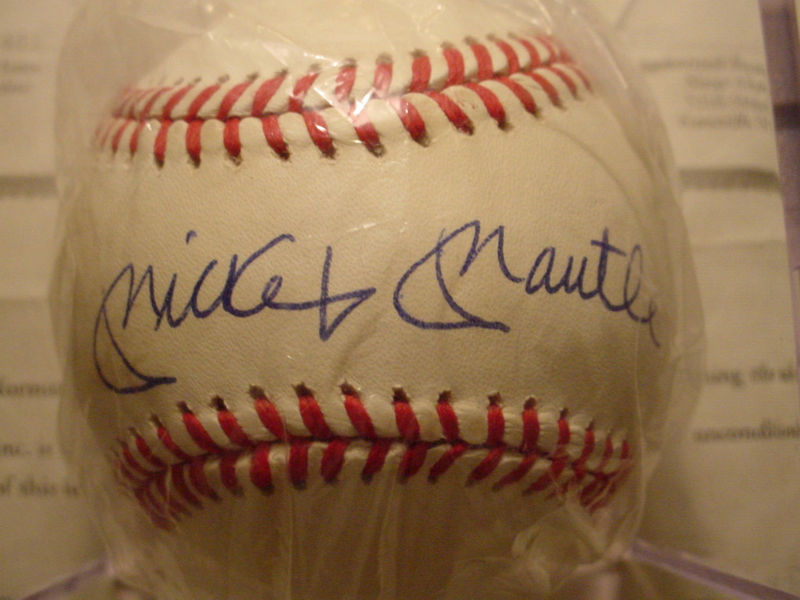 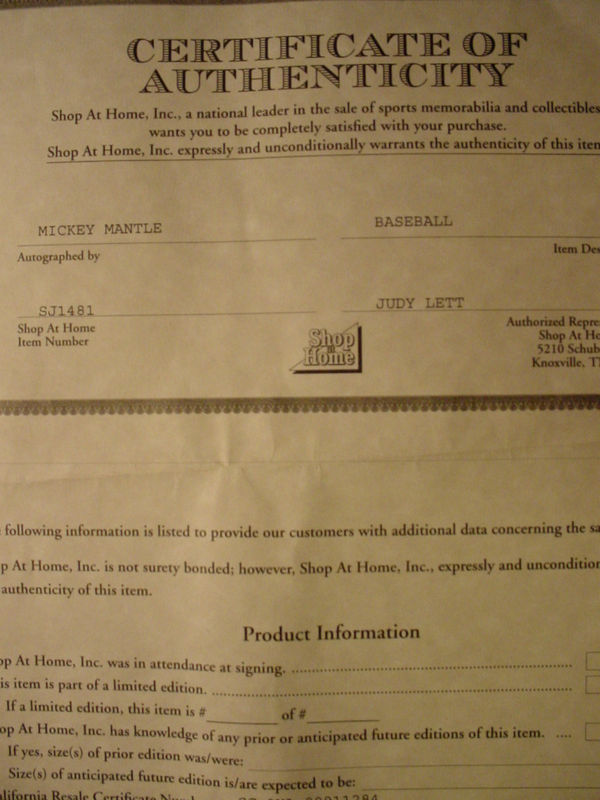 Permalink Reply by CEE GEE on April 21, 2012 at 6:35pm
Hey RB...You should have it authenticated to put your mind at ease...but at first glance I honestly think its not authentic...

Thanks for the feedback. I am going to get it "authenticated" to be sure. Once I do I will circle back to this board and let everyone know. FYI, I dug up my invoice and he it is. 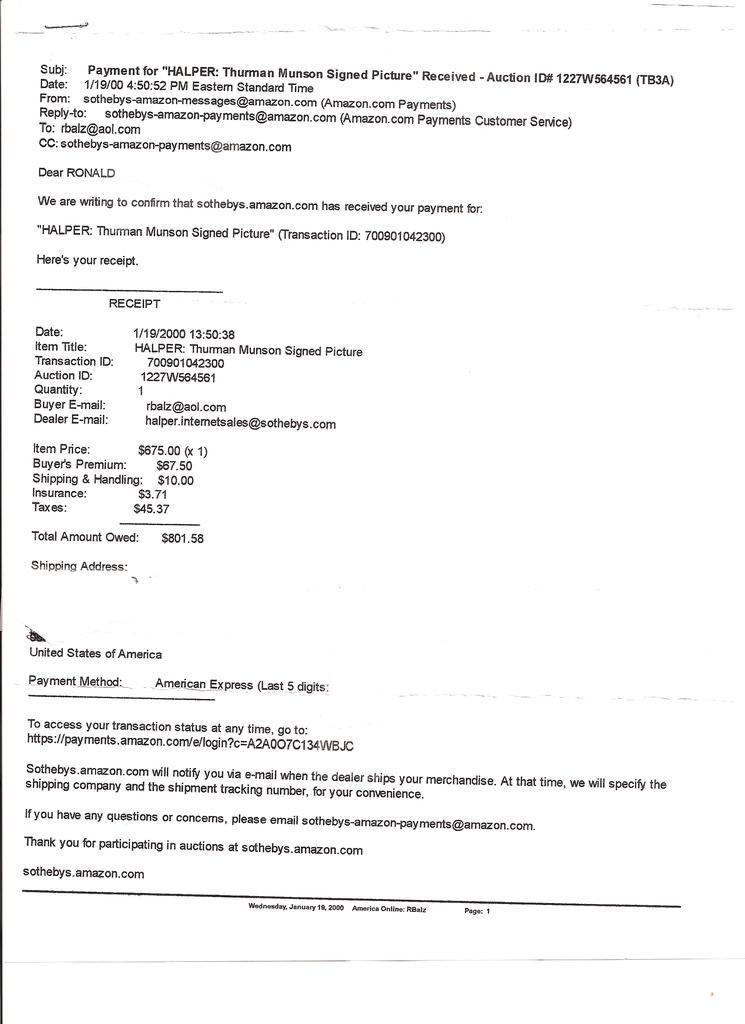 Well, I hope at that price it is authentic...

Sources estimate that at least $2 million of Halper items from the Sotheby's auction in 1999 were misrepresented or outright forgeries.  The Hall of Fame's items from the MLB purchase of 1998 contain at least another $2 million in fakes, including Joe Jackson's jersey, bat glove and pocket watch, as well as Mickey Mantle's rookie jersey and Ty Cobb's diary.

Sources also indicate Sotheby's sold a quarter-million dollars worth of items stolen from institutional collections. When Halper died in 2005, his estate put up for auction the remaining items he retained in his personal collection—some featured ownership marks of the New York and Boston Public Libraries. The FBI recovered the NYPL items. A source familiar with the current FBI investigation into the thefts recently said, "When tracking the stolen items, all roads seem to lead to Barry Halper."

Collector Chris Sullivan, of Duxbury, Massachusetts, considers himself one of Halper's victims. At first he was thrilled with his purchase of a 1907 Jimmy Collins Red Sox jersey.  But 12 years after raising his paddle at Sotheby's and paying over $31,000, Sullivan was informed by uniform expert Dave Grob that his jersey is a fraud, showing evidence of foul play and suspect tagging.  What's more, the jersey features a red logo.  Jimmy Collins was traded to Philadelphia in July of 1907, and the Red Sox didn't actually wear "red" until 1908.

The halper family has disputed Peter Nash's account.  Peter Nash has a thread on AML as well.

The subject Munson pales when compared to the items referenced here:

ABC Sports around the same time wrote about  another Mickey Mantle Glove in it's fall 2000 sports auctions;

Because of Mantle’s popularity and the price Crystal paid for one of Hall of Famer’s gloves, Sports World President Scott Goodman predicts the 1962 glove up for grabs today will be the most hotly contested item.

“We expect the glove to go for somewhere between $100,000 and $200,000,” said Goodman. “It’s definitely our centerpiece … we’ve already gotten bids from people in Japan and Australia.”

Sure Money for a ‘Sure Catch’? The 1962 Mantle glove is a Rawlings model that he gave to his teammate Tom Tresh that season. In a written letter, Tresh says that Mantle gave him the glove when he was suddenly moved from shortstop to the outfield. Mantle, noticing that Tresh only had a small infield glove to play the outfield, fetched his used spare glove from his locker and gave it to his teammate.

“What a thrill, how could I miss?” Tresh wrote. “I was destined to become a good outfielder because I had ‘Sure Catch, Jr.’ Mickey … had nicknamed his other glove ‘Sure Catch.’ He told me all he had to do was point ‘Sure Catch’ anywhere near a baseball, and it would just snatch it up.”

Tresh’s belief in Mantle’s spare glove paid off: with “Sure Catch Jr.’s” help, he won a Golden Glove award in 1965.

Bidding for Sure Catch, Jr. will start at a minimum price of $20,000, Goodman says. If the winner resides in the United States, Tresh will personally deliver the glove to its new owner.

Thus, coming from Tom Tresh (and I don't mean Tresh2) then is this one genuine.  Notice they are claiming it's also a Rawling model and the date being 1962 but the Nash Article Claimed on the Halper Glove, "..but glove expert Dennis Eskin and Rawlings senior glove designer Bob Clevenhagen determined the glove was,  ”Made no earlier than 1964 and most likely used in 1966...”

Of course the fact remains of the great possibility that these are two very different type rawling models.

This report from the New York Daily News back in '03 however seems to lend credence to the Nash Report.   It also seems to call into question "sloppiness" of other items - perhaps even an $800.00 Munson!

" Esken remembers a shell-shocked Crystal asking as he brandished the bidding paddle from his skybox. "Please, don't let my mother know how much I paid for this glove.

" But four years later, on the eve of an auction of 300 pieces put up for sale by Mantle's family, memorabilia insiders are saying Crystal may have been rightfully concerned. His $239,000 glove, Esken says, didn't come from the height of Mantle's career, as Sotheby's "circa 1960" description indicated; most likely, the glove was used in 1966, when the injury-plagued slugger appeared in just 108 games and the Yankees finished in last place in the American League. It's an error Esken and others say is typical of the scandal-stained, cut-throat world of sports memorabilia. If the staff of a venerable auction house is sloppy with a premier item in an historic sale, they ask, how much care goes into less significant items marketed to the average fan? "So much stuff is being authenticated these days that even the best guys are making mistakes," says Steve Terman, a Washington,

finally located my halper catalogs from the 1999 sotheby sales...

looking in the modern era one I only find four items related to Munson that have some pictures.  The pictures reflected however does not match the one that has been previously depicted.

However in one lot there were two pictures and since the receipt is posted again below I don't see how this could have been part of the 1999 auction.  Now it is certainly possible there is another so if someone can supply the catalog ID number I can cofirm.  Incidently, there were 4 munson items; Baseball, Letter,  & 1 lot with 2 photos;  a batting stance one and a young munson.

THIS IS A REAL THURMAN MUNSON AUTOGRAPH AND IT'S FOR SALE !!! 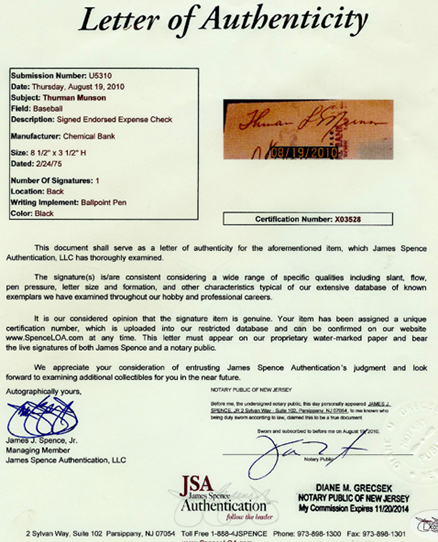