An acquaintance offers me this autograph of Harrison Ford. He tells me that they signed it in person and I know the person and he is very serious and respectful. What do you think of the autograph?
I think there are many experts from Harrison Ford's firm in the group, so I would like to have your opinion.
Thank you!!! 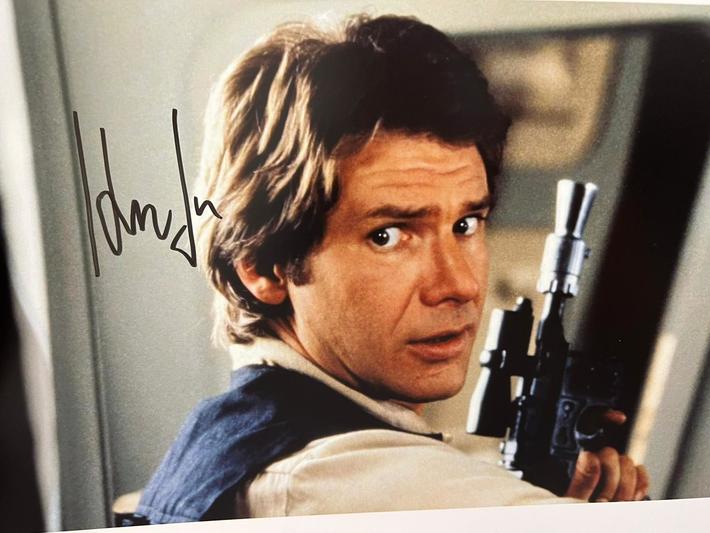 This closed at $1665 last year. with the juice (Buyers Premium). Vintage photo and clear older signature. Not optimal contrast or placement. It is not even color. I doubt it is an official print as well - ithe photo is overcontrasted, cropped and lacks fine detail. There is a whole range of greys missing. 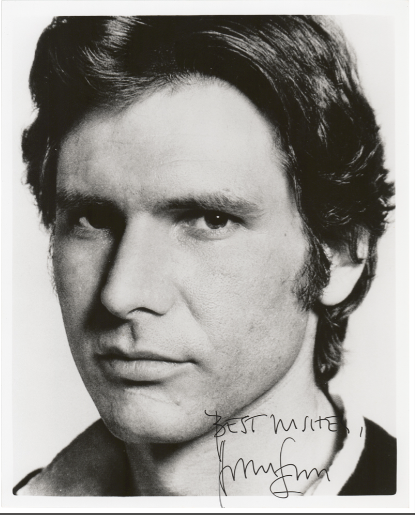 Thanks for everything. And you are absolutely right.
That's why I only collect those autographs that are signed to me. As I explained when I introduced myself on this page, I am a journalist in Barcelona (Spain) and that allows me to have many contacts with actors who come to the city. Sometimes I travel to London, Paris, Cannes or the Berlinale, where they also go frequently.
It is the best way to have personal security that an autograph is real.
All the best. The truth is that I thank you for the information. I am learning a lot from reading your daily discussions.

Most welcome. Many folks here with great eyes to help you. Keep reading the threads. On My Page you will find a link or two that will help you get to know what qualtiesare there are to look for- with examples.

RR is a weird microcosm of collectors when it comes to value. It doesn't reflect a knowledgeable collector or the hobby as a whole.

Here, for example, are the closed auction results for signed photos from Sy Liebergot.

You'll notice that many of those photos are exactly the same in inscription & image.

That's because they all have the exact same source: Steve at Farthest Reaches, who is still selling them today, for at least 50% off the price those bidders are paying.

Why are bidders at RR so eager to consistently spend over $200, even going as high as $300 to $500, for images that they can buy directly from the source for $150? And why are numbers fluctuating so much for identical items?

Because they aren't educated in what they're doing. They see something pretty and decide they want it.

I absolutely agree people should know what things are worth before they jump in and start buying them.

I also think RR is the epitome of buyers who don't know what the heck something is worth before they jump in & start buying it.

For example, someone on RR paid over $600 for this or $596 for this when a "Bladerunner" photo, dual signed by both Harrison Ford & Sean Young, with a sit down sig & impeccable provenance just sold about a month ago, directly from Coolwaters, for between $500 and $600.

RR bidders strike me as people who only know RR & absolutely nothing of the collecting world outside of it. They're the last place I'd look to get a reasonable idea of what anything is worth--and one of the first places I'd sell if I decided to part with my collection.