This is the place for the discussion as to the follow-up for the secretarial study thread.

The Theory
Photographs and other memorabilia sent to Mr. Heston's office were signed by a secretary. However, Mr. Heston did authentically sign books through-the-mail.

Real vs. Secretary
In authentic signatures, the R in "Charlton" is distinctly a lowercase "r" and less than half the height of the L. The first four letters are clearly "Char."

In secretarial signatures, the R looks much more like a lowercase "l" and is about the same height as the L. So, the first four letters appear to be "Chall."

and it seems to have merit.   However, in looking at hundreds of Hestons of late there are many that fall into the above theory and yet quite a few variations that aren't so clean.  There are no sacred cows in this thread but do keep it civil.

Bear in mind as you cascade thru the many examples below there are clearly some that fall into this, some that don't and an interesting variation.

Some commentors have been quick to point out that dealers and sellers of these items may have fallen into following a "bogus" exemplar.  I will post Jan Schray's exemplars and the "secretarial" one touted here will be found in her 1997 exemplar book.  Thus, without a date on COAs it's hard to tell when something was sold.

Cyrkin in the other thread opted to close it with a number of justifications;  ... indisputable work.   It's at risk of being adulterated by Hestons being presented as either genuine, out and out forgeries, or variations of known secretarials without the painstaking, focused research and consensus-building that made this study so valuable in the first place. That's beyond the scope of this discussion and is putting the study's clarity and integrity at risk.

I for one could not disagree with this rationale moreso.  It is thru the posting of perceived  hestons that either lends support, refutes or enhances the theory.   I noticed the updates to the original blog include; I will note that, out a hundreds of exemplars, I found a handful of books that did not have a distinct "r" formation. My theory is these books may have been through-the-mail exemplars signed by a secretary. The reason for this could be that Mr. Heston's schedule did not allow for signing at that time or, once his illness took hold, secretaries began signing books through the mail as well as photos.

I've also noted this in same discussion with Zipper and there was a suspicion that other forgeries were apparent.   it is the continued flow of questionable non-authentic items that gives strength to any theory.   I'll attempt to capture the many examples before they are arbitrarily removed.

R1 - stay on subject (don't care for moderated blogs but since owners of threads have little recourse to have comments removed at their discretion).

R2 - if you are going to post a link than at a MINIMUM post the picture of the item.  The secretarial study thread has a number of links to non-existent photos.  Esp Ebay ones as they have been removed by EBAY or no longer visible.  If you don't know how then after you post the comment pm me and I'll capture the picture for posterity.

If its a glossy photo you might be able to remove his autograph with acetone or nail polish remover. Only tried it so far on the to or For inscriptions. Worked like a charm also a less evasive way is using a dry erase marker and trace what you want removed then wipe it away. I was surprised it worked. Please of course check a corner the dry eraser marker will wipe away first.

This is an authentically signed Charlton Heston typed letter to his NY lawyer dated Los Angeles, November 14, 1956, the day he attended the world premiere of THE TEN COMMANDMENTS. 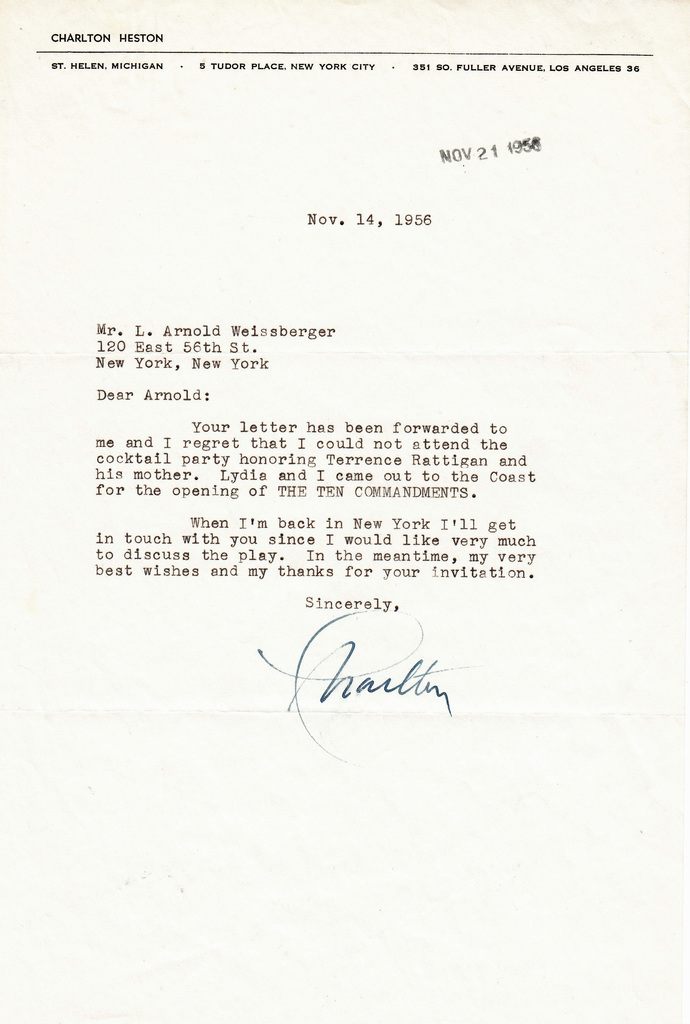 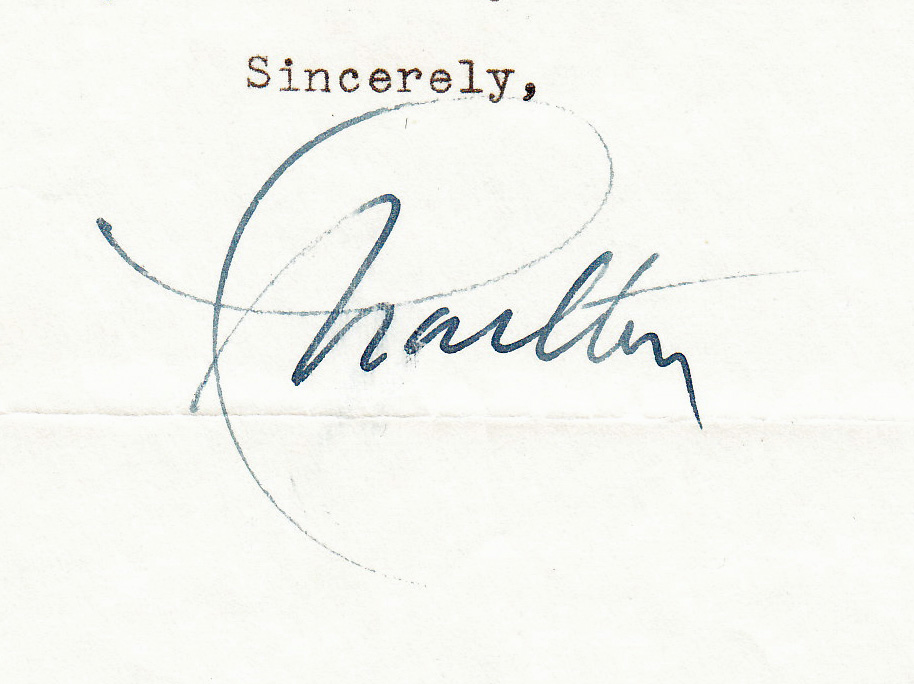