these don't say signed in the cart but in the pre-order section, they say signed copies available. I checked with the store and they said they were signed but they were only getting about 10 of each, I also asked if the con Pollo book was signed by just jimmy, or both him and Jennifer and they weren't sure but assumed it was by both. no guarantees but I ordered one of each just in case. I just put "signed copy" in the comment section and the email they sent said signed copies
Con Pollo: A Bilingual Playtime Adventure (Hardcover) By Jimmy Fallon, Jennifer Lopez, Andrea Campos (Illustrator)
https://www.sanmarcobooksandmore.com/book/9781250830418
The Christmas Princess (Hardcover) By Mariah Carey, Fuuji Takashi (Illustrator), Michaela Angela Davis
https://www.sanmarcobooksandmore.com/book/9781250837110 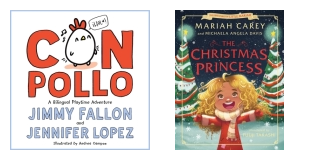 yeah, I just hate that I have to wait until November 1st to find out since they said they would ship together. they sounded pretty confident that they would be signed but they don't have them yet, so yes fingers crossed lol

The store confirmed I’m getting a signed copy! Thank you so much again!

Very lucky!! I got the adverse email :-(

I regret to inform you that we have run out of signed copies of both of the books that you ordered due to overwhelming response.

I am including the links to our Signed Books page, as well as our Pre-Order page.   The Signed Book page lists signed stock currently in the store.  Then, the Pre-Order page lists upcoming titles and has notes for what we are expecting to get signed.  I try to keep both of these up-to-date!

Hopefully more signed copies will be made available as the release date approaches!

well that sucks,  I just got a call from the bookstore and they found out they are not getting any signed copies of the Jennifer Lopez & Jimmy Fallon or Mariah Carey books. I was worried about actually getting these but I figured at least one of them would come through.

I know some other people on here got orders in for these and I haven't seen any comments so I was wondering if anyone else has gotten their orders canceled yet?

I did! Such a shame but worth a go

yeah, we had to try,  it did seem too good to be true to get both Jennifer and Mariah at the same time and i guess it was.

Far too much of this bait and switch tactic happening lately - i wonder how many people have ordered these and many other items - who are not on Live.autograph and totally unaware that they will receive non signed copies?