I bought this cut sig from a Check. It was sold by Markus Brandes, which makes me sure it's authentic.

But when did she sign it? I found an autograph study on the internet about the development of her autograph which makes me imagine that it might be written 1958 or later. What do you think? Maybe Pauline has more detailed knowledge.

Thanks for taking a look. 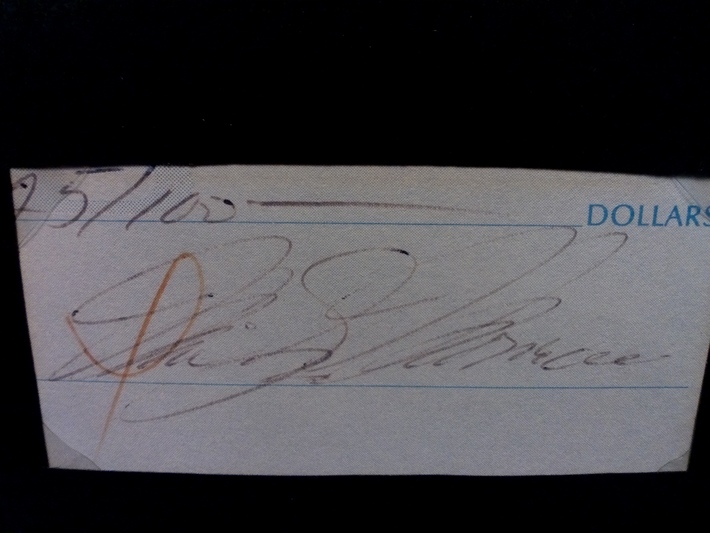 Thanks, Eric. KaiMi replaced it and it's nice quality.

In the study I read it was written that the"lyn" looked more like a"fin" with an extended f after 1954. After 1958 the sig in itself became more rushed, especially in her first name. That's what makes me imagine that my piece is from 1958 or later. I don't know - still hoping for Pauline ...

I hope you got notification of my reply. Your signature is very good. I have to agree with others on here about the other "examples" which are both, IMO inauthentic, so don't compare yours to those.

Thanks for the heads up Eric.

This is the entire piece right? this looks real.

This could be from anytime after 1953, if it were 1961 the printing of the numbers would not be in hand writing, but preprinted, typed. This reminds me of 1953-1955 era and that, at a glance is her printing of the 25/100, it was almost never anyone else's hand. Anything from 1958 onwards was pre-printed and just the signature was in her hand.

Although her signature was nearly always tidy on cheques, this is a particularly confident "happy" signature, from a happy, on the up, period of her life, say "7 Year Itch" or thereabouts. I say that because around that time her sigs all looked like this, although it's a bit scrambled, but that happened sometimes too.

Thanks a lot for your help, Pauline! Your remarks are absolutely revealing and helpful.

Well, the saying almost always plays out the same.  No good deed goes unpunished.  Just trying to give an example of a signature and get much non-requested advice on my example.  I am happy with the piece. But this definitely gives me pause before I participate in a discussion again.

BK Collector  -   I understand what you are saying about participating in discussions.

In the last 2 weeks, 3 separate individuals who are members here have mentioned to me in messages their frustrations.  The common theme is being turned off by what comes across at times as "know it all" type comments that read like a discounting of other people's thoughts and/or taste.  As well as what seems to be a driving need to have the last word in discussions.

I've encouraged these folks to stick it out.  I have a personal motive for that because these are folks here who have the same interests as myself and I don't want to lose their input.

I hope you stick around as well.

I know bad news is awful, but I think everyone on here has been in that boat. I certainly have. And I personally have had that news on some items (not Marilyn) that I still own and likely cannot really sell (A Star Trek signed cast photo 1979 anyone? - with all authentic signatures except apparently Leonard Nimoy!)

But I would rather know than not. And when you know Marilyn Monroe is one of the top 10 most forged signatures . . . . chances are.

And I know Steve C has a Marilyn item I think is absolutely genuine, but there are many doubts for others and it is hard to sell because it's so unusual and likely wouldn't get authenticated by Beckett, which seems to be the one auction house that has the highest standards, as far as I know.

I just wanted to help people not go through what I went through. So I made that blog http://marilynmonroeautographs.blogspot.com some years ago now, and I think it's a pretty good shortcut to getting one's eye accustomed. It might help you too?

One of the fails is in fact, not being able to place her signature in a time frame. That's generally indicating it's a composite of styles, therefore not genuine.

I came back to this website, tail between my legs after my Star Trek debacle :-)

Pauline, I can image that MM is indeed one of the top 10 most forged signatures.   James Dean probably should also be on that list (if he's not).  I searched high and low for years for an authentic Dean...and thought I had one that ended up being bad.  Luckily, I was able to return it or it would have proven to be a very expensive mistake!

The other thing about these Marilyn Monroe Production cheques, besides people buying the blanks on Amazon, is her partner Milton Greene also signed them, and sometimes his signature was somehow erased and a fake Marilyn added. I would need to see his writing to see if he wrote out the amount in full.