Why are they not comparing their own real examples of Marilyn Monroe to other items they have for sale? which are clearly secretarial:

The above link is a practice run for the note of which there is an image of at the end of this posting, a secretarial, the exact same wording to a different person. Marilyn's secretary probably had to write many such letters.

"Profiles in History" are purposely saying that it is written in Monroe's hand and that she was "practicing her new name" - what rubbish. As if she needed to practice "Marilyn Monroe", only the Miller was new - and its not her hand-writing anyway. Marilyn had a miscarriage and some surgery, either one of these occasions were publicly known and a lot of people would have written concerned fan mail. The secretary had many notes to write.

I have let them know. I wonder if they will change the wording on the secretarial notes of which there are two auctions worth - 4 pages in all, incorrectly assigned to be Marilyn's own hand . . . they even made up this little illogical story. There is one bidder on one of the secretarials too. More watchers on the real items.

There is one bargain on there - the signed card "Marilyn and Daddy" currently just $1000, that really is her hand-writing.

and below is the final version of the secretarial - not for sale on this auction, but clearly the same hand. 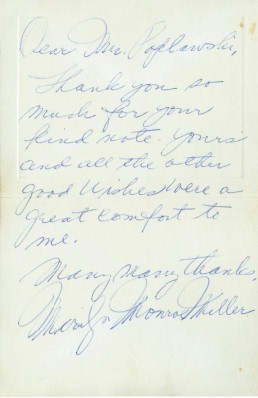 Profiles decided to pull or void these auctions after all. I noticed the final result on all the secretarials was Price Realized 0. But the real ones were all way up there $11,000 for the hand written letter to her niece Mona Rae.