Rushed Jimi Hendrix autograph on a handbill - legit or not?

My belief is that this is genuine. It's clearly a messy/rushed example, but I see so many genuine traits in there, that I'm confident it's authentic. However, other people I've asked have felt differently.

What do you think?

It was purportedly signed at the Bongo-New Orleans Club in Malmo, Sweden on May 23, 1967. The original owner persistently waited outside Jim's box. Jimi initially refused the autograph but obliged after a second request, using his guitar as a writing pad (which would explain the rushed nature of it). The seller also met Chas Chandler who signed the handbill. 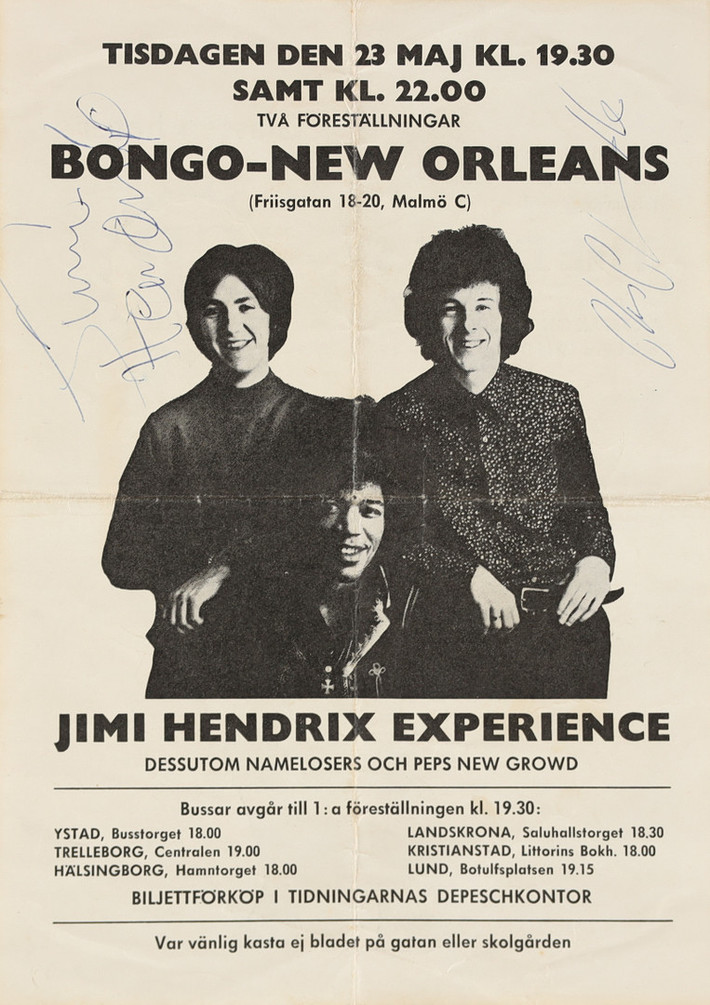 Agreed, although I’ve seen worse Hendrix signatures and wouldn’t call it “very atypical.” The Chas signature does look very good. It’s hard to see someone effortlessly forging such a solid looking Chas signature on a rare handbill like that. Are people claiming that Chas signed in ‘67 and then the Hendrix was forged at some point? Both signatures look similarly aged.

This is what I was saying. Could be authentic, but then again it might not, and it wouldn't make a good investment. Who would put 6k on a maybe?

To be honest, unless you've seen it signed with your own eyes, all autographs are "maybes" and come down to opinions. I agree that it possibly isn't the shrewdest investment, but not everyone is buying for that reason. If the buyer just wants an authentic Hendrix and is confident that it's genuine, there's no reason why they shouldn't be very happy with it.

I hadn’t noticed that the original owner also saved the poster. Wow. Yes, I saw that. I've never seen one of those before, but again it appears to be genuine and adds to the premise that the vendor probably was at the concert on May 23, 1967. It would be some effort to forge the concert poster, handbill and Jimi's autograph!

Yes, and add a nice Chas signature for good measure. Not Mitch. Not Noel. Chas.