The Natural movie poster signed by the cast

I purchased this movie poster signed by all the principal members of the movie "The Natural." The purchase was made in 2004 or 2005 via eBay, and at the time I only paid $150 for it. I was new to autograph collecting back then, and I made some mistakes, in particular purchasing a Lou Gehrig autograph that was later revealed to be fake. I've authenticated most of my collection via PSA or JSA, but never sent this particular item in.

The autographs are of Robert Redford, Robert Duvall, Glenn Close, Kim Basinger, Wilford Brimley, and I believe Richard Farnsworth. Really looking at it a few days ago, I thought the style of signatures were all remarkably similar, but I have one other autograph of Robert Redford from a different source, and that autograph appears in the same style.

What do people think? Have I been hanging a fake on my wall for all of these years? For what I spent on it if it turns out to be a fake, oh well. I'm more curious than anything. It's all fake. It's all done in the same hand. The Redford is really, really bad.

I have a Glenn Close, and this doesn't look like it, either.

At least you didn't pay a lot for it. And...PLEASE tell me you know the company you bought it from. You can try for a refund, or we'll write about the place here, so others can avoid them.

It was from an eBay auction 14 years ago (I found the email with purchase information). I paid $105 for it, it is what it is. The eBay seller closed their account a long time ago, but the name was "kenokollector" for what it's worth.

Thanks for the feedback, I had a suspicion. I have one other piece of Natural movie memorabilia, I'll post it in a separate discussion for an opinion.

I agree, it's not genuinely signed.

Agreed with the others, 1 hand and all fake sadly

I'm looking forward to seeing your other Natural piece. I have a baseball card from the movie, with Roy Hobbs. I paid $50 for it at an auction. I think The Natural is one of the best sports movies ever (I wrote about it here: https://fox5sandiego.com/entertainment/at-the-movies-blog/the-top-7...

the money is into the framing and not in the autographs and looks good, but for the real collector of autographs a disaster.

So obviously this is a fake, and again thank you to everyone who took the time to review this. I still have the "certificate" of authenticity, and the older me looks back and the younger me, and wonders how the hell I didn't spot these things when I first started collecting.

The certificate is from Celebrity Signs, and I've not been able to find anything much about them other than seeing one or two other auctions listed with them as the authenticator. Anyone have any history of this company? I'm just curious at this point, I'm not in any way trying to prove what I have is real. That ship has sailed... 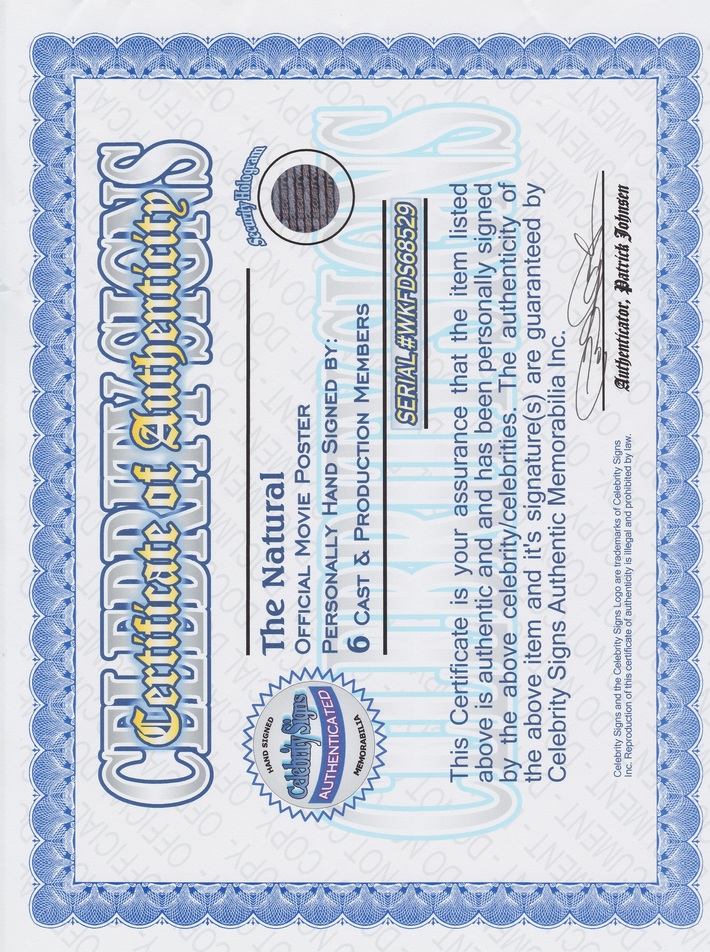