GERRY MARSDEN OF GERRY AND THE PACEMAKERS

I sent a letter to Gerry Marsden of Gerry & The Pacemakers in England back at the beginning of March asking for him to sign this Guitar Hero pick guard for a Guitar Hero guitar.  Yesterday, April 29th, it did arrive back in my mail signed as requested.
Gerry and the Pacemakers were a big force in the British Invasion back in the early 1960’s.
https://en.wikipedia.org/wiki/Gerry_and_the_Pacemakers
Just a couple of their many big big hit songs.....
Don't Let The Sun Catch You Crying Gerry & Pacemakers
https://www.youtube.com/watch?v=p9G_0hplf_w
It's Gonna Be Alright Gerry & The Pacemakers
https://www.youtube.com/watch?v=jaYTXoofnFk 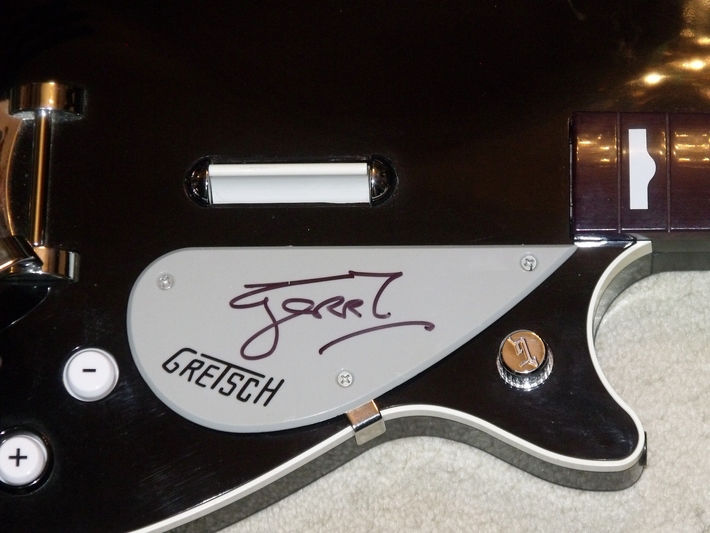 He even added a small signed photo. Thanks for rocking my memory bank! Gerry and the Pacemakers were a big part of the British Invasion that changed my taste in music forever.

Thanks fellas.  He was one of my favorites back then.  At that time never thought something like this would be possible but time marches on and now a days it is.

Got his autograph and shook his hand.

Everything shown here looks just fine to me.

I'm glad it worked out for you. As a longtime collector of autographs usually at scheduled signings or in the past waiting at the backstage door, or near the parking lot for athletes, I want to move on to mailing for autographs. Can someone in the group give me a heads up of where I can start getting the address of non-sports celebrities both past and if possible present? Thank you for your help.

You will quickly learn the ins and outs.  Sometimes you never hear back from them and sometimes you do.