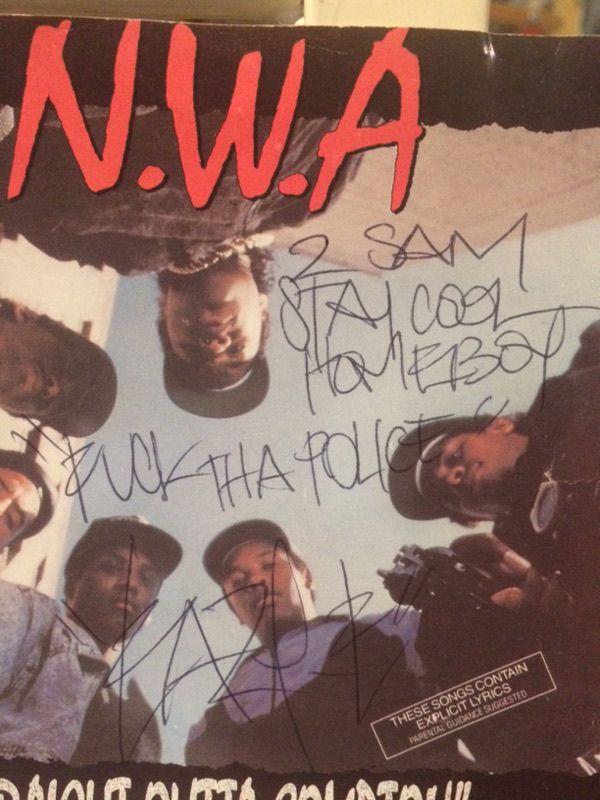 EAZY E Personally signed NWA Straight Outta Compton CD. Only one in existence!. Local pickup only. EAZY signed this for me personally when he visited the strip club where I was the dj ! EAZY and I had mutal 'interests' who were at the club that night. I was asked to inform our friend when EAZY arrived. I did eventually inform our friend. Not until I went up and introduced myself to him. His bodyguards were huge, but EAZY was straight up cool and excused his bodyguards so we could chat. We momentarily chatted. I told him I'd let our friend know he was here. He thanked me. I then asked if he would mind signing my NWA Straight Out Of Compton CD. EAZY was awesome and enthusiastic, and said "Sure"! Then I said, "Can you do me a favor and sign it 'To Sam F--k The Police' Which as you can see he was happy to do.. Then he followed it with his signature. If you've done your homework, you will recognize the 'STAY COOL HOMEBOY' which appears on a predominant amount of EAZY's autographs. You will never ever see a F--k The Police addition on any thing EAZY has ever put his signature alone on. This is one of the last autographs EAZY E was able to provide to anyone. He took ill and died shortly after our meeting. Why am I selling it? I got this autograph almost 26 years ago. It has been one of my favorite reminders of what an awesome life I've had. I'm at that age where it's time for someone else who knows just how cool and important EAZY E had and has been to music and entertainment, enjoy this fantastic reminder of EAZY's contributions. If I had any family left who had any interest at all in this unbelievable part of my life I would give it to them. No interest shown. No problem. That is why you have found it on ebay. EAZY E remains one of the most important players, performers, contributors in RAP music history. As a member of NWA he was 1 of 5 individuals who changed the world of RAP music. Every RAP music performer and RAP music lover owes a debt to NWA for bringing RAP to the forefront of American and world media, culture and you. Considering it is the only piece like it of it’s kind, this is the only EAZY piece group or no group that has him signing f*** the police. This is one of the coolest pieces of rap history in existence.
I would prefer this to be a cash transaction, though I have no problem with paypal. I will not ship this. It's authenticity is such that you have to see it to appreciate it. This is an in person sale only. Please respect my terms and be nice. Thank you. Sam

How much are you asking?