Four years ago, I treated my daughter to Old-Timers’ Day at Yankee Stadium for her birthday.  We sat behind home plate.  Reggie Jackson made up for his four strikeouts on that Bat Day many years ago.  I finally saw him get a base hit.  My daughter and I still laugh about that personal Reggie Jackson story of mine.

I purchased a New York Yankees #44 baseball jersey, and I made plans for him to create a masterpiece.  I purchased one autograph and five inscriptions.  I prepared four of the inscriptions on index cards.  My plan was to place each index card in front of him, and to verbally say what I wanted him to inscribe.  I was one of the first people on line, so I was hoping that things would proceed smoothly. 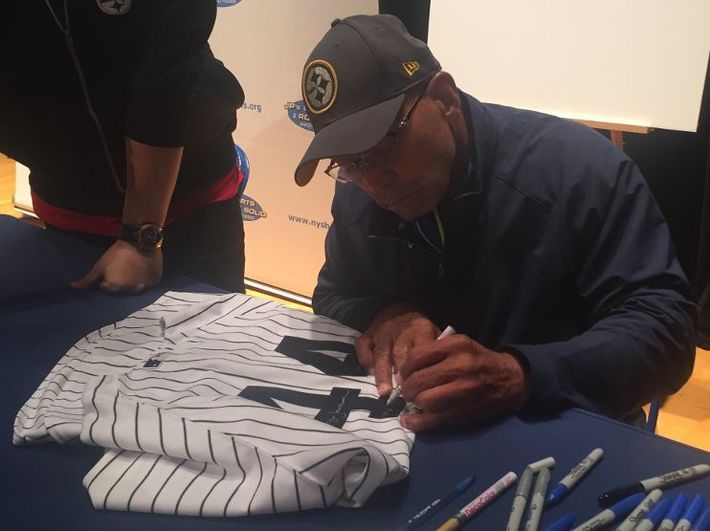 Reggie Jackson had misheard what I had said, and instead of signing 5X YANKEES ALL-STAR, he signed 5X EX YANKE AL ALL STAR.  Yes, he even spelled YANKEES incorrectly. 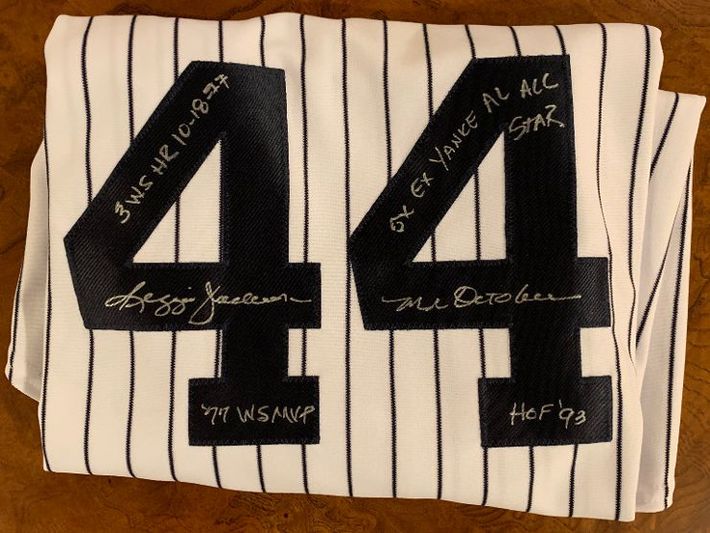 The final masterpiece.  Notice the inscription error on the second "4".  The index card had written on it 5X YANKEES ALL-STAR.  Reggie Jackson seems not to have looked at the index card, and clearly misunderstood what I said.  It is certainly an interesting conversation piece.

Reggie Jackson smiled, rotated his arm and rubbed his shoulder.  He then handed the jersey back to me with great care.  I thanked him, and I walked away.

I was told that I could ask him to correct the mistake.  I decided to leave it as it was.  It would certainly make an interesting conversation piece.  To this day, I wonder if he did it on purpose.  I suppose that would depend on a person’s point of view about my favorite childhood Yankee.  I refuse to believe that he did it on purpose.  What do you believe?

great story Mike.  I dont think it matters at this point, it really gives the jersey much more of a personal touch than the standard inscriptions.  I like it!

Thanks, Terrier.  I am glad that you like it.

I agree with Terrier.

Here are a few "grumpy" Reggie Jackson stories. In the local paper in San Diego, a retired sports writer talked about some of his most memorable stories from 10 years of covering sports. Once, Dan Marino pinned him against a wall and threatened to have him killed. Another time, Reggie Jackson was really rude to him. And on a second interview, when he complimented Jackson's singing (from some event he saw him sing at), the reporter asked Jackson if he'd sing a bit, and he grabbed the mic, farted into it, and walked away.

But, here's one my friend had happen. He's a HUGE fan of the A's, so when he saw Reggie sitting on a bench drinking a soda, he walked up saying "Oh man, I'm a big fan." Reggie thanked him. Reggie then stood up, and threw his soda and empty bag of chips on the ground before walking to a limo. My friend said, "Oh man, you're gonna liter in our town?" Reggie than started yelling at him and got in his face, although he then picked up his trash. My friend said, "I was just busting your chops, I don't care if you liter." At that point, Reggie apologized and they talked baseball for 20 minutes and even took a photo together.

I prefer your friend’s story to the San Diego sportswriter’s story.  At least he gave Reggie Jackson an opportunity to redeem his poor behavior.  Thanks for sharing, Josh.  Great stuff.

Jackson has been very rude in my encounters with him.  I tell one quick story.  I had a friend who pitched for the A’s in the late 80’s when Reggie came back to Oakland.  His name is Steve Ontiveros.  During a spring training game, I asked Ontiveros if he could get me a few signatures.  Without me even saying who I wanted, he says “I can get you anyone you want except Reggie.  We are not allowed to ask him for any autographs!”  I then had an encounter with Jackson in the parking lot following the game.

There was one on the internet from a few years ago where a guy, I think at the National, was taking photos of Reggie while Reggie was checking out a card dealer. Reggie goes off on the guy telling him if he takes photos he better be buying him a drink. They wound up at the same airport bar together though far enough part that the guy wasn't approaching him. I'm sure Reggie would be far more up to a drink at the bar than a free autograph. Like your friends story, these guys need a little something to break the ice. I attended a lot of autograph shows, mostly wrestling, and from being at the shows for hours you can tell what these guys want. They want to talk their careers with their buddies, the guys they went to war with. If a fan asks a wrestling question it's usually 'sign, take photo' and move on to the next customer. But the wrestlers want to know about the fan's hobbies, where they live, what the town they are visiting is like. They want to know about things they may not have seen or experienced while on the road.

That is a very common story from back then, Steve.  I am wondering if he has worked to improve his image more recently.  He appears to have toned it down since then.  Thanks for sharing.

I agree, Jason.  Many of them simply want to be treated like the rest of us.