I've recently become more and more attracted to letters from persons that I have an autographic interest in. I now have an Alfred Hitchcock typed letter from 1940 in which he discusses his budding American film career with an assistant director. It's simply signed "Hitch" in black fountain pen ink.

Some may not be interested in something like a TLS since there is not much "ink" on the page but I am fascinated by the content. I also have my eye on a TLS from John Ford from the same era in which he engages in a bit of gossip about an actor who he finds to be too melodramatic for a part he is casting.  This one is signed "Jack" with no surname.

Of course there is so much material from literary and historical figures in typed letters. I'm curious if other members here are interested in this format. Or does the lack of actual handwriting not hold much interest?

Lillian Gish during the filming of her last film in 1986: 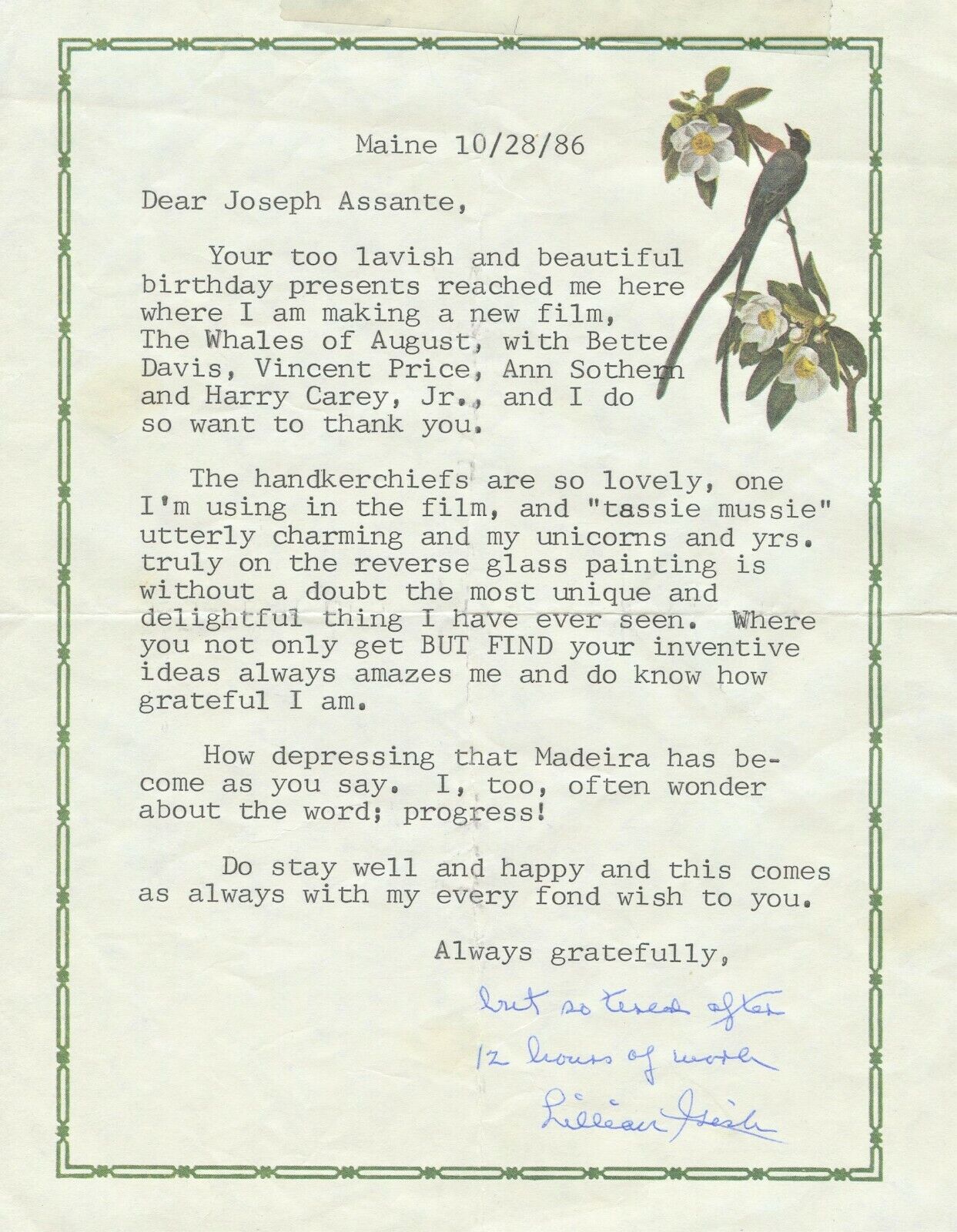 I mostly prefer letters. Some of the content is interesting and even historically important.

Plus, while autopens and sectetarials can be a concern, outright forgeries seem like much less of a problem.

New Autographed Letter Signed, September 21st, 1906, six pages describing in great detail the launching of the Cunard express liner R.M.S. Mauretania, sister of Lusitania (sunk 5.7.15) and the fastest and perhaps the greatest liner of her day (26.75 knots even before entering service, "no" lives lost in WW1 and not sunk). She had the largest turbine engines in the world. She was, by far and in fact, the largest and fastest man-made object on the planet until 1929. She briefly attained 32 knots an hour (with the wind at her back) in 1931, which is truly incredible. I have been looking for something like this for some time. Over 15 years, easily. I've just had postcards and some unique photographs of this event. This letter is six full pages and has truly excellent content. The launching goes on for a few pages starting well before - thses folks waited some time. I knew there were 20,00 people there (on a rainy day) but this is a different vantage. I wrote out a bit below - very exciting:

“…We stood beside the corporation quay & got a splendid view…About 3:35 we heard the hammering and then the buzzer blow and every one was on the tip toe of excitement in fact held their breath, until the shout went up ‘She’s moving!’ & then oh!...The roar of voices, whistles, buzzers until she reached the water was deafening...”

Below is an original photograph (one I have never shown I believe) of the event taken from Ballast Hill (exactly what it sounds like - a pile of rocks) across the river, a ticket to attend the launch, and this new letter: