Like many of us, I'm interested in several areas in the autograph world.  Having said that, I've come to find that my particular focus has settled on pre-1960 Hollywood...from the Silent Era on up to the early Method Actors.

I'm interested in hearing from other collectors in this time span of Hollywood material what your thoughts are on signed photographs TTM (through the mail) vs. In-Person autographs.  This would particularly concern signed photographs.  Album pages were usually In-Person and contracts and legal docs. usually speak for themselves.

What about publicity photos?  I would dare to say most we see today on the market were TTM.  Some notable exceptions of collections of In-Person signed photos from the 1930's would include those of Stockton Halstead, Saul Goodman & that still not fully identified entertainment reporter "Mush".  These three individuals were different from other autograph seekers because, instead of album pages, they presented stars with nice publicity photos to have signed in fountain pen.  A rarity at that time.

I would venture to say that most Golden Age of Hollywood signed publicity photos we see were TTM.  Does this present an extra challenge in authentication as the possibility of a proxy might be more of a reality?  Do publicity  photos (probably TTM) warrant a more extensive and thorough examination for authenticity than album pages?   (As a side note, I have found that candid photos can usually be considered having less of a chance of a proxy signature),

Grateful in advance for any interest in discussing this.

11x14's cost 25 cents and are usually nicely signed by the celebrity in question.

These numbers are rough percentages.

Hope this helps you discussion. :)

I once had a beautiful 11" x 14" double-weight matte portrait of Errol Flynn that was from the same sitting in about 1940 that has graced the cover of a few books about him.  It was warmly inscribed and signed.....one of my favorites.

About 15 years ago, I showed it to one of our most astute dealers/authenticators.  Turned out to be secretarial.

*****The upside was I was given a free lesson in how to spot a real Flynn vs. a secretarial.

my experience and love of the golden age of Hollywood stems directly from my grandfather's collection. These were signed at the Hollywood canteen during WW2 while he waited to ship off to Saipan and Hawaii.

I have almost 70. There is no doubt that they're all real because my grandfather was no jokester and no one even knew they existed until after he passed away.

All of them have been authenticated, although I never questioned the fact that they were authentic.

I studied these signatures for months and came away with a true love and a better understanding of the time. I was hooked.

What a great story, scott!  And what a great collection to have from your grandfather!

Those Canteen autographs that have survived are such a part of both Hollywood and U.S. history.  I have this postcard signed by Joan Crawford to the children of a serviceman who was visiting the Canteen (Joan was also in the all star Warner Bros. film THE HOLLYWOOD CANTEEN). 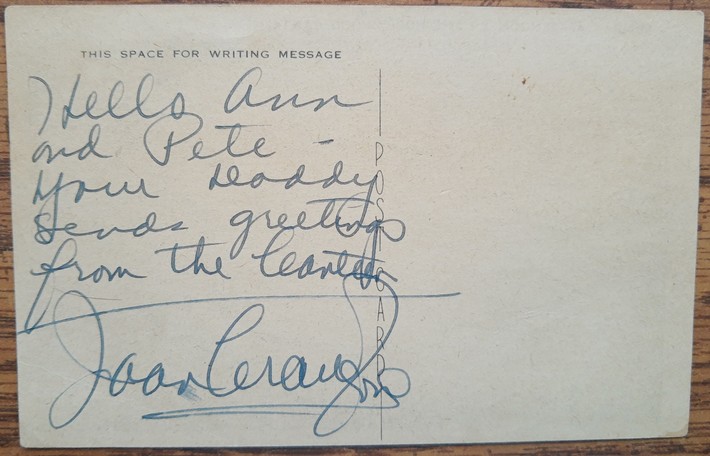