Have a look at this jersey I got from a 'reputable' store that claims to have products that have indisputable proof. I can't help but to see the similarities with the Sir Alex Ferguson Tribute Jersey. I feel the need to lodge a scam complaint to prevent others from being duped like I have. Unfrotunately I am not an expert and maybe you guys can help me at this point before I seek a professional opinion (any suggestions who to go for this?)

The chelsea photos are from the item. At first I wanted to return it because of the funny looking "C" on the embroidery at the end of the word club. The last line.

Then I started seeing similair jerseys to that of the one I posted a couple weeks back. Look at the AC Milan Legends Jersey - the same exact format as the SAF's tribute jersey.

I have tried to return this jersey but this company has so far caused me a lot of problems. I am convinced that it is from the same supplier as the other jersey.

This company has other similair jersey (squad signed) as those I have just posted.

I will be lodging a complaint so I would rather not name the company at the moment. Please help look at the attached photos and I would appreciate the comments.

Anyone know the best professional to take it to, if needed?

This particular Chelsea Jersey has been a really tormenting experience. I bought it at the same time as the rest.

Any help will be very much appreciated. 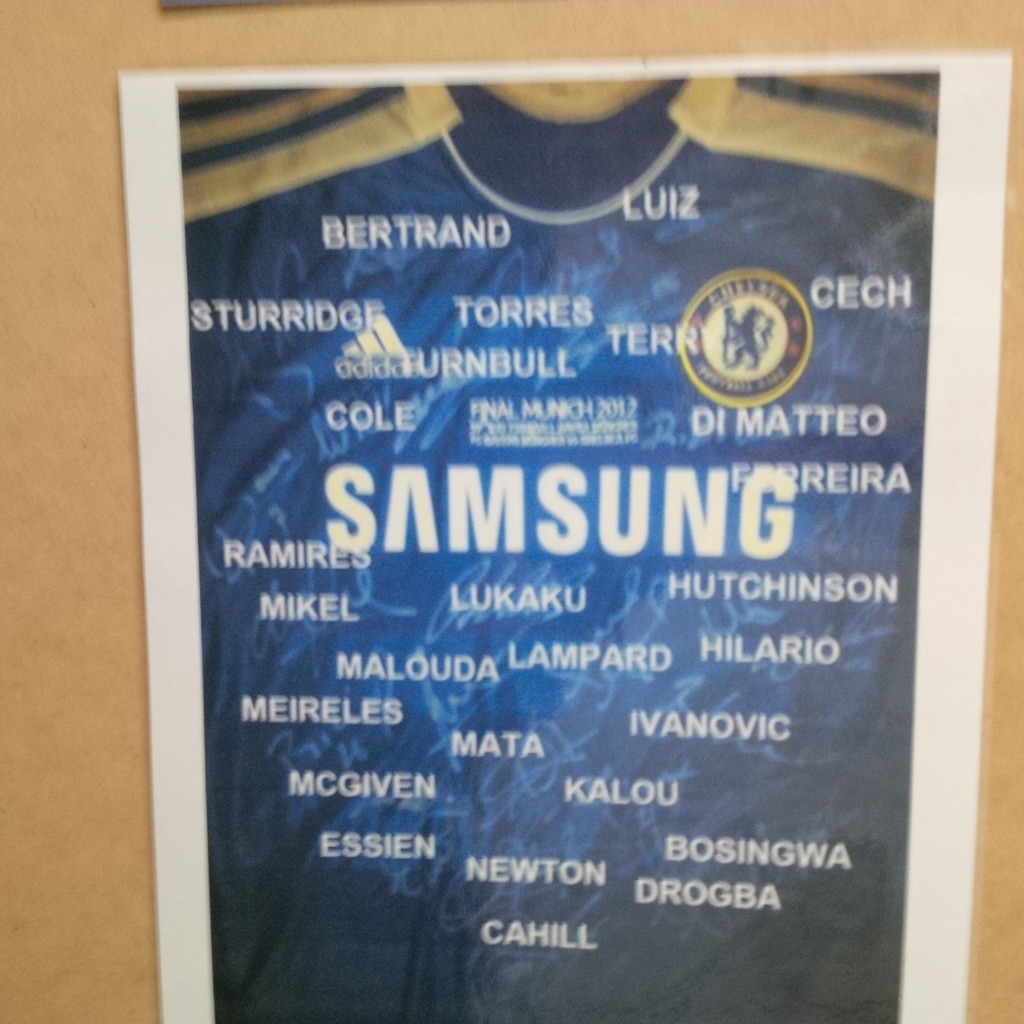 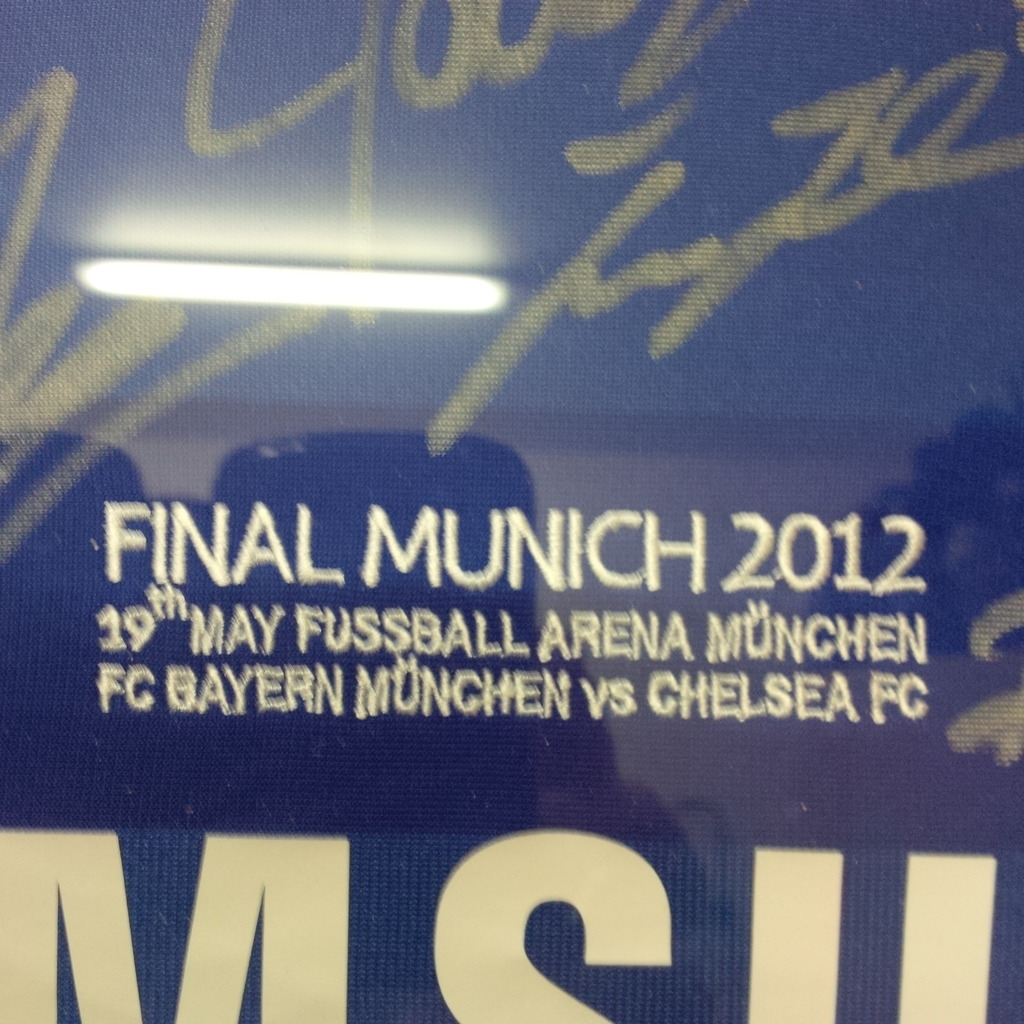 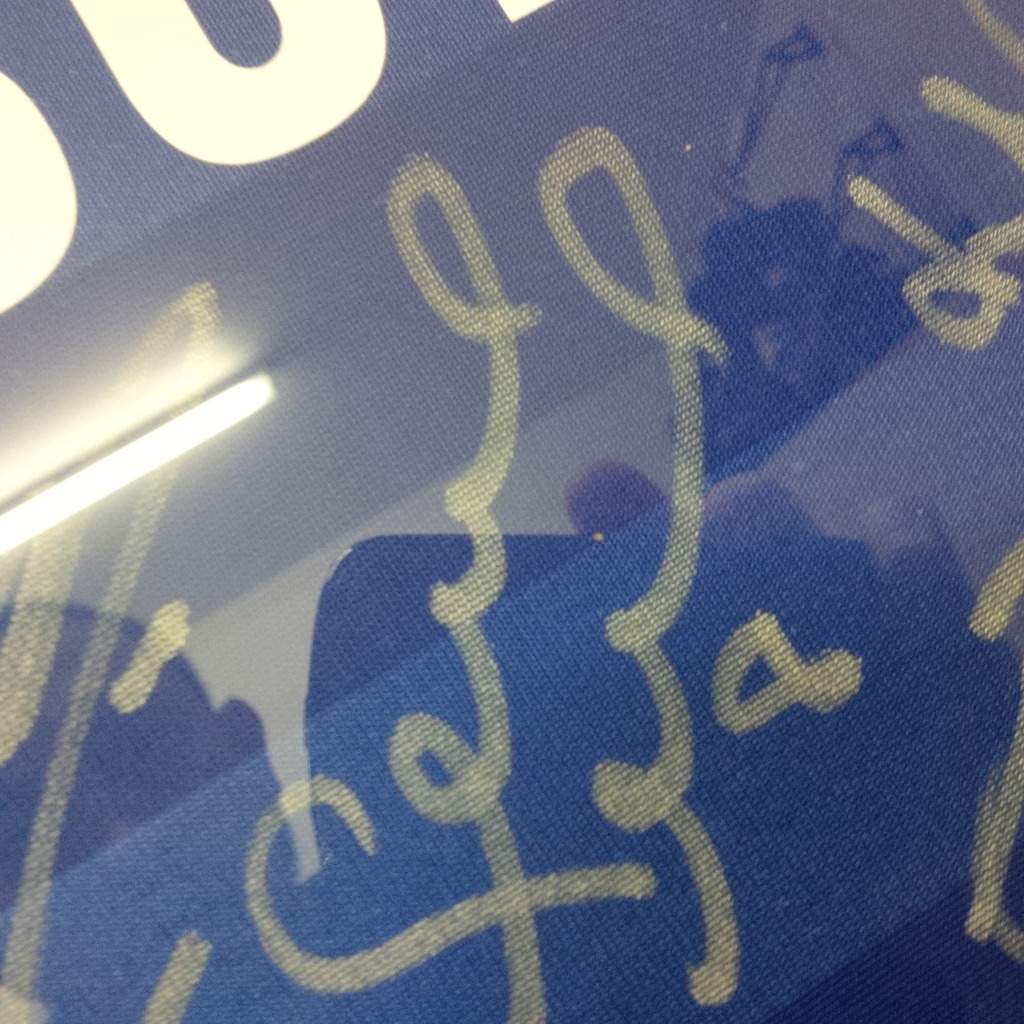 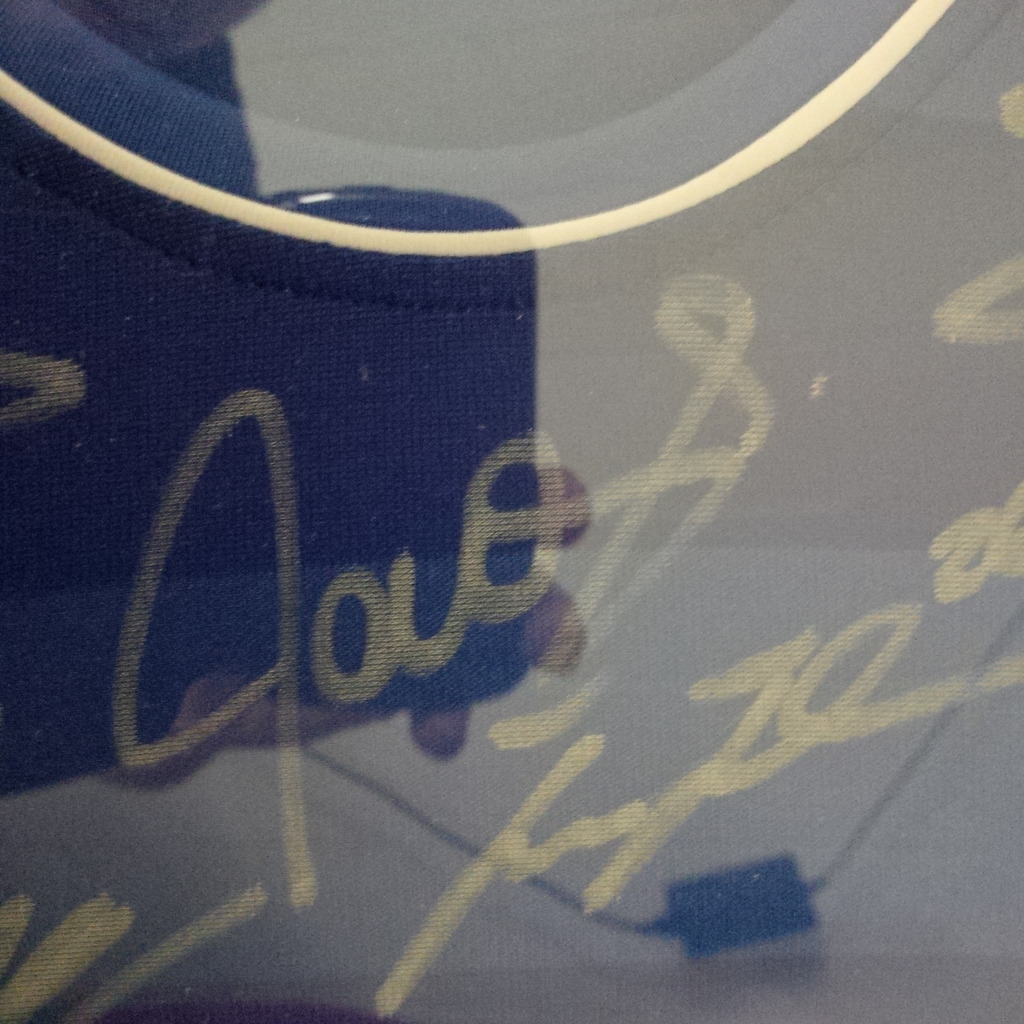 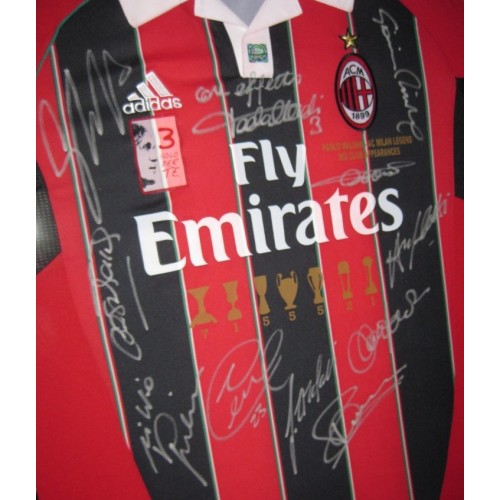 Chelsea one looks awfull, I know you are not going to tell us but it would be helpful to know the seller

The seller has put me through a nightmare, I have lodged a complaint to UACC and the local fair trade office. Since I am not an expert I cant verify that the item is fake (I only have a strong feeling that they all are).  I was hoping some one could guide me in the process of getting these items authenticated by an established and reputable company.

My other option is to leave the burden of proof to the seller. I am requesting for proof that it is genuine but I have repeatedly asked the compay to provide me with proof but to no avail.

I would love to give you the name now but I am afraid to be caught in some of form legal trouble if I were divulge the details of my problem here before the investigation takes place?

Believe me there is nothing more that I want to do than stop this from ever happening to someone esle.

This is truly awful. The Lampard looks like it's been done by a child. Hopefully you can get a refund

You won't believe what he has put me through. He has ripped me off all my consumer rights and thinks he'll get away with it.

Ok, I have personally obtained a signed AC Milan team signed jersey, that Milan jersey is disgusting.  Ambrosini's signature does not resemble his signature whatsoever.

These signatures are all perfectly placed on the jersey as well, which never happens.  My jersey was done at a meet and greet, where they were sitting, and still they didn't perfectly place all their signatures to fit in every little crevice and space.

Also note the pen pressure, which is the same for EVERY signature on those jerseys.  Real signed jerseys would show variation in pen pressure, as everyone signs differently.

Another thing I found funny was that those legends didn't even play for the time the jersey was produced.  That AC Milan jersey is a 2013 home jersey.  Many of those players have retired around the 2008 and prior seasons.  I guess the forger didn't want to shell out cash for the jersey that those players actually would've played in hahaha.  I also highly doubt you could get Berlusconi to sign a jersey, given his political and judicial troubles and since he rarely attends a game.  Where did they claim to get this item "signed" at?  This should have all been investigated prior to purchasing (if you indeed purchased the Milan jersey).  You could've caught them in their own lies based on when/where these players/management officials actually were to prove their story is false.

I didn't purchase the Milan - I bought the SAF tribute, Man Utd Legends and the CFC 2012 CL squad signed jersey all at the same time. I realized that the Legends was a fake when I looked at George Best signature and compared it to his original - I sent it around for an opinion and got the all the same answer - that is was fake. Then I found out that the SAF came from the same supplier - did what Ian told me to do and contacted the club - didn’t like the answer and the seller could not provide me with any other detail.

These items were from all different dealers.

While all this was happening, I started to look closely at the Chelsea Jersey (it was bought from a respectable shop - that has a lot of other genuine memorabilia - some looks like they came from A1 and maybe Icons) which I bought for AUD2200. I kept trying to tell myself, how could something so expensive be fake. Then I saw the small deformed "C" and when I compared it to the original CL jersey even the "A" was stitched differently. I started asking questions and the guy (who claims to be an expert in the industry" tells me to call FA-Premiersignings for authentication. I COMPLETELY FREAKED OUT.

Not only I have read about that company but I have also been in touch with the National Football Museum and know all too well what has happened before. In fact I made another call yesterday and was told some guy just called in about a fake football.

I checked his entire website and started to find the legends jersey and I got the shock of my life when I saw the Milan one. Not only it looked terrible as you have described (with Berlusconi signature and all) - but it looked exactly like the SAF jersey.

This shop that I am returning it too has done so many things to me - including changing the return policy the day I wrote to return him the jersey. He accused me of tampering with the product. I tried to get someone to personally hand in the jersey but they could not do it in time so I had to eventually send it direct via courier.

When it arrived he said the frame was smashed - and said you either pay AUD300 or I will send it back to you. That was the amount he had been trying to squeeze out of me from the very beginning. From his actions from the very start which has been dodgy at best, I fear he has wrecked the frame - a small crack at the two bottom panes to recoup the lost after realizing the jersey's might be fake.

I am not going to let him bully me and will stand up to him and fight this all the way. I can't imagine how many more unsuspecting consumers have been duped and still have a fake hanging on their wall.

From your comments of the AC Milan - I will feel more confident to get him to show his proof.

Ammar, if he is a local dealer, I would definitely try and file a case based on his actions.  It smells fishy altogether.

You would probably win- especially if you have picture proof of him changing his exchange policy after you inquired about a return.

AC Milan, at least for me, are easy forgeries to spot because people focus on the big name signatures and if you connect the dots it doesn't make sense half the time.  Why would a player who is currently playing in Brazil sign a 2013 home kit?  Simple research saves money.

If you look up a seller named becks20092010, who sold about 40 + pages worth of forgeries during the World Cup last time it was played, he sold fake signed jerseys for $200+ each all positive feedback received.  It's sad how many people buy fakes and have them in their homes thinking they have the "real deal."

Since time is of the essence, I suggest you file a claim with your credit card immediately.

All my other complaints have been lodged and they are all lengthy, in chronological order + photos/proofs. I hope someone will take it seriously and give it the attention that it deserves.

I just fear that bit about the broken frame is just my words against his and a courier driver who didnt even talk to me. I have filed a complaint with the courier to find out what exactly happened. We'll see how that turns out. (I wouldnt be surprised if he went to the extend of damaging the frame himself so that he could claim AUD300 from me).

For the benefit of all of us, I will present a detailed account soon of what happened so that it will probably save someone else all the trouble that I'm in now.

Research = gold.....hahaha. I was fooled into thinking a AUD 2200 jersey couldn't be anything else but authentic. What an expensive lesson it turned out to be :(

Ammar, did you pay via credit card? If so then you should be covered and be able to get your money back through charge back regardless of what the seller claims. Personally I feel you need to name and shame the seller so others can be aware

I paid him via a master card but it's a debit card from the local bank here. I'll check with the bank on Monday to see if it is covered. Thanks for the suggestion.

I will name the shop Dan in due time, I promise. I would like to give it a little time and listen to the responses of the complaints that I have lodged with Office of Fair Trades (Refund and Scam complaint), Australian Memorabilia Association and UACC.

UACC has got back saying he is not their dealer. They have not even confirmed if he was an ordinary member. I provided that with his member number but all UACC said was - he is not one of our dealers. I am assuming he is merely a normal member which any tom dick and harry can do - it doesn't even lend weight to the credibility of his company.

In fact I have collected all the proof that I need including shots of his website should he decide to change things around. I will post it all here in due time so people will know of what happened and stay away from his store.

I will show how he tried to cheat me by changing his return policy.

I have ended paying AUD508.22 for the ability to look and hold a fake item for less than 7 days and I am really pissed at how he has treated me.

Permalink Reply by AC on October 13, 2013 at 2:51am
Ammar it would help if you name the company as then you could save other buyers going though what you have. At least it have said it was in Australia since you have mentioned the Australian Memorabilia association which if you went though the list about 70% of the seller deal in crap.