I started this thread to gather information on Roger Keith "Syd" Barrett signatures to hopefully determine just how rare or common he is to collect.

I would like to point out that there are many variations of Syd's sig. I have read several times that people have only seen a few different constructions. So here is what I know to exist;

RKB   (I don't have this example on file, but Cheffins reports that it exists from the auction)

Is there any correlation between the forms and the years, or the subjects of his books?

Any reason or rhyme to placement or deployment?

Were certain forms only used for artwork etc?

And rhyme or reason him signing the left or right page?

Not chronological, but most of us know he started w/ Roger then to Syd and back to Roger. And his writing construction remains quite consistent throughout, although at times it can get quite bizarre haha.  I have spent a bit of time to try and figure out if there is a pattern but to no avail. It seems fairly random. Even just the Cheffins books change alot but of course no "Syd" in any of those. When I get to my "Barrett" book, maybe I will find something as that book is probably the best example of documentation known to exist. The family did a great job on this one.

We can't continue down there because ther "nesting" posts have reached their limit I believe.

You said that intent has no real bearing. It has a LOT to do with it - as much as what/when or why. You also said "If one starts getting too involved in definitions, then his paintings are not signatures either."

But his paintings are not signatures - his name as signed with intent on that painting is a signature. A mark to note something about a date or medium is not considered a signature in art as far as I know. This isn whyh there there is such a difference in paintings signed (for example) R.V.R., Rembrandt and Rembrandt Van Rijn (other meanings like attribution/sigs aside). My 1914 Nelson Etheridge Dawson etching is initiated in pencil only, and suffers in value because of this despite the fact it is a literally unique working state proof! The reason is that "the artist" (and all that comes with that persona) did not affix his standard signature - he merely made a note. Does this make sense? If the Dawson was initialed in ink there would be a premium. That is not so much intent and material/permance/contrast.

Yes it makes sense but I'm just not sure I agree and you do have much more knowledge of art than I. It seems to be a fine line that is confusing me.

I will have to think more about "intent" definition I guess.

Another thing gathering these numbers and scans - it will allow one to say "Syd normally (most frequently in existing numbers from your research) signed this (X) way...". Perhaps it is 50/50 but those Mick Rock book will skew everything because of sheer quantity (so far) hence my notion to deal with that as what it was - essentially another man.

I see what you are saying and I agree.

I already deal with the Mick Rock signatures as a separate entity from the rest. Hence the reason for my separate 4 categories already posted...MR (psychedelic renegades, Cheffins auction, Art/paintings and various sigs. And I will add to each one in time.

The important thing is that the foundation is laid and we can make inputs and corrections along the way. I can only work with what I have to base conclusions. I'm pretty certain there aren't some way out there examples of his signatures hiding somewhere as I do have on file from 1967 to 2006 and things remain fairly consistent.  But, never say never

This is an important topic because in this modern day, felt is very common and in Syd's time it wasn't common. This doesn't mean it's not possible but it definitely means it's highly unlikely.

I have NEVER seen a Legit felt signed Barrett anything but I do have these 2 examples that are being peddled as Legit.

This one is from a UK ebay seller that claims he turned down 2000GBP and gets requests to sell on a weekly basis. He is not actively trying to sell this item but does have it shown along with an item for sale. Maybe it's a ploy to see if he gets bites on it. I certainly sent him a message haha

At first glance it appears good in overall construction and loops aren't too bad. But further study reveals many bad qualities. First it's in felt pen... big red flag. Then the d starts at the top and is in very unusual formation. There appears to be only one r and or something too funky is happening here. And the dead giveaway is in the ett as they are separated strokes. Too many separate strokes that don't match anything remote to this. And there are a couple other red flags to boot.

Here is the other felt example I have on file and deemed Fake. This item was being sold with 2 other Floyd felt photos that are also deemed Fake.

This photo was posted earlier, but I didn't classify it as Legit/Fake for a few reasons at that time.

This appears to be an attempt at copying an already known Fake. And again the felt pen is the first red flag. There is just too much wrong w/ this construction from beginning to end although the overall look isn't terrible. 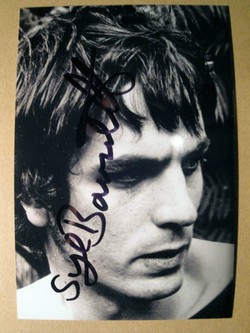 If anyone has ever seen a Legit felt signed Barrett item, please let me know either on this thread or in private message.

Missed out on getting this book (it's out of print now & the price has gone right up), but David Parker's Random Precision: Recording the Music of Syd Barrett 1965-1974, has a page with examples of signatures - iirc from contracts etc.

If you're not  a member & haven't already the Birdy Hop facebook group might be a good place to ask about signatures - people who knew him post there, including Libby (one of his girlfriends), - copies of some of the letters he sent her that are in the art & letters book are archived there - + Iggy "the Eskimo" who's on the cover of The Madcap Laughs used to post (she died recently)  & people who knew him pre-PF in Cambridge.

There's a thread showing that page from Random Precsion but you have to be a member to view it - David Parker says all the sigs are genuine.
https://www.facebook.com/groups/birdiehop/permalink/919472778201531/

From the thread:
David Parker "I recognise that page! They are all genuine too."
David Parker "All but the last one are from EMI documents, such as contracts. The last one was from someone I knew at the time who worked for Pink Floyd. He had to visit RKB to get his signature on a photo release (or something similar)."

David Lammey "David — any theories on why he started using “Syd” for the signatures from 1972 to 1974?"
David Parker "It's a long time since I put it together, but the first one is definitely from the original Pink Floyd contract with EMI. I am pretty sure that the next four were related to royalties and similar financial matters, whilst the ones from 1973 and 74 related to using recordings on compilations and suchlike. The only studio recording sheet he signed, when taking away copies of some early 'Madcap' recordings in 1969, he signed 'Syd Barrett'; I didn't include that one because Malcolm Jones had used it in 'The Making of The Madcap Laughs'. I seem to recall he also used 'Syd Barrett' on the image release for the Piblokto album that MJ also included. Bearing all of that in mind, my guess would be that he used both signatures interchangeably; the 'Roger' or 'R.K.' for important legal documents (Nick Mason was listed as 'Nicholas Berkeley Mason' on at least one of them) and 'Syd' for less important or day-to-day stuff. All of that is a long-winded way of saying that I don't really know why"

There's also speculation in a separate post that some of the books won as an job lot from Cheffens later had signatures forged to increase value on resale.
https://www.facebook.com/groups/birdiehop/permalink/925268714288604/
Attachments (don't post photos as attachments):

I have a hard time believing the Cheffins books would be forgeries for several reasons. And one of them would be that they were sold in grouped lots and not individually. Plus those signatures look very authentic. Also, if it ever came to light that these were forged, it would do some serious damage to Cheffins reputation. These books have been in circulation for so long now, that some experts would have picked up on them by now.

Btw... I have those contract sigs on file which are a great group to have.