I’ve recently been investigating French cinema icon Catherine Deneuve’s autograph, and I wanted to open this thread due to the overwhelming number of forgeries I have found being sold worldwide. A high majority of these are unknown secretarials, making it harder than most would think to find a legit Deneuve signature.

This all started a couple of months ago. I wanted to add Deneuve’s autograph to my collection, so I wrote to her requesting an autograph TTM. A couple of months later, I received a strange signature, which had no resemblance to other previous TTM successes I had seen, or her IP autographs. This got me curious, and so I started my research.

To my surprise, I found that Deneuve has rarely (if ever) signed TTM, and has instead been sending out secretarials for at least 20 years. It would seem that the only way to get her autograph would be in person, making her signature scarcer and harder to find. However, not many people seem to be aware, and thus, her secretarials are being sold as her own signature, in most websites and stores. Some have even been wrongly authenticated by organizations, such as PSA. The resemblance her secretarial signature bares to her own, is what might have caused the confusion; however, when taking a closer look, the differences are more than obvious.

Below are some examples of Deneuve’s secretarials from recent years: There are 2 recent versions of her secretarial autograph. Since 2018, she has been sending the one at the bottom, which is just a “C D” followed by an endless trail of loops, and which looks nothing like the real thing. Before, she used to send out the one at the top, which reads “C Deneuve”. This is the most common one to be mistaken for Catherine’s real signature, and the one that is being sold out there the most.

Below are various IP signatures and examples of her handwriting from recent years: 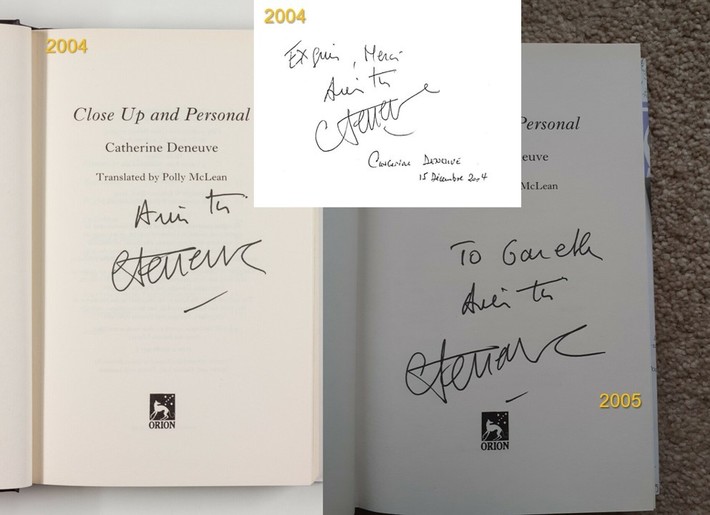 I don’t see any point in comparing these to the obvious secretarials from 2018+, but when doing so with the previous TTM ones that most people assume are legit, these seem way stiffer and tidier, whilst the IP ones are somewhat messier, and have more flow. Just the (sort of) triangle shape which forms the initial Ds is different, being much narrower in the TTMs. The “eneuve” is consistent, straighter, and again more narrow than in the IP versions, where it’s more irregular, having variations in the sizes and heights of the different letters. Deneuve also usually tends to try and link the line on top with the first E, a tendency which is absent in the TTMs. Also, the TTM signature is a lot more compact, whilst the IP stretches out more.

But the confusion with the French diva’s autograph doesn’t stop there… Below are some examples of TTM successes from the late 1980s, 1990s and early 2000s: 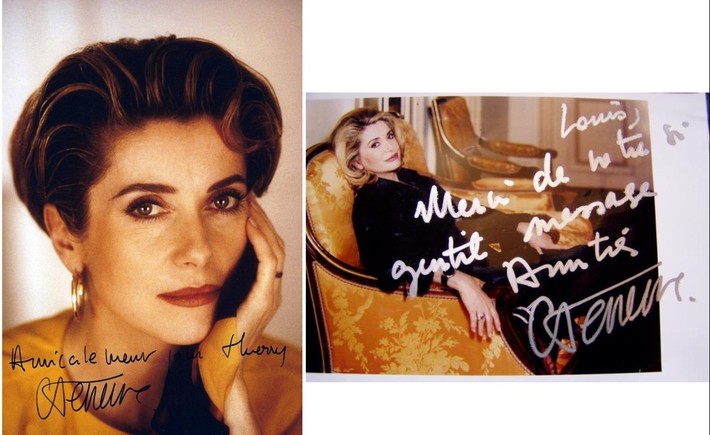 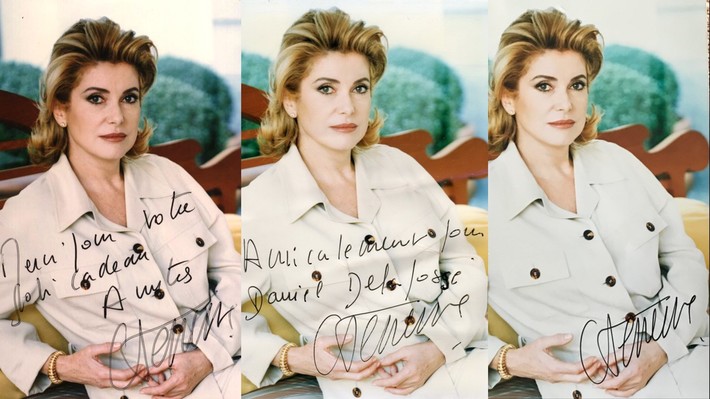 These are also very commonly found to be for sale everywhere, but their authenticity is debatable. Although not as neat as the later TTM secretarials, these signatures are yet again compact and slightly stiffer. The sizes of the initial C D are also larger than usual sometimes, and overall, the first letters start out pretty large and then seem to shrink.

Below are examples of Deneuve’s handwriting, as well as 1990s IP signatures: 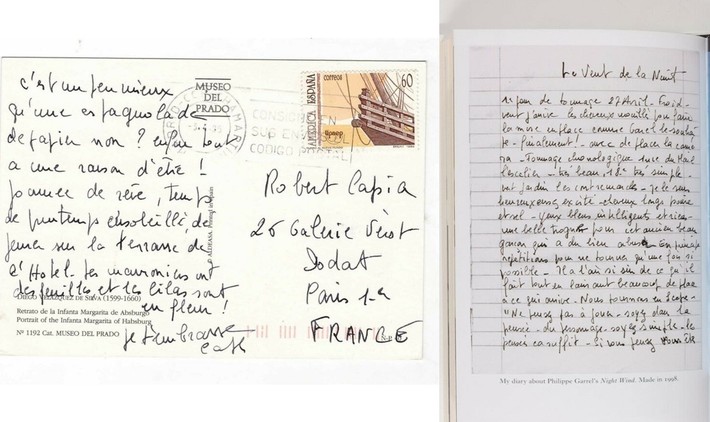 An early 1990s postcard written to a friend while she was on holiday at Madrid (Spain). / An extract of her diary from 1998 published in her autobiography. 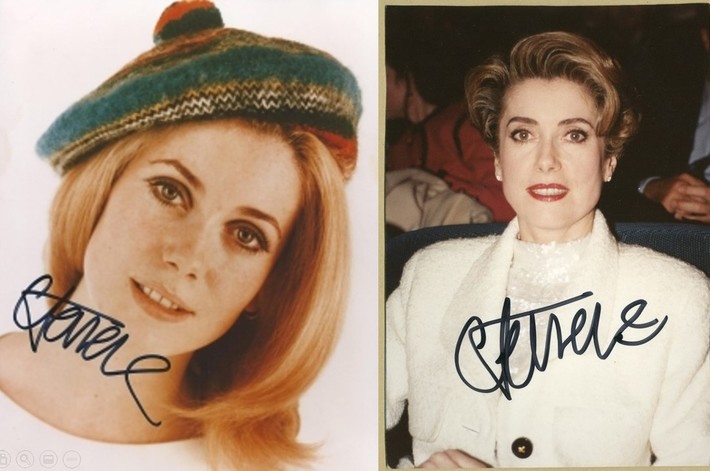 Yet again, they differ with the TTMs. In these IP examples, the ‘shrinking of letters’ is absent, the initial Es are stuck onto the D, the N in “Deneuve” links to the second E in a way that the TTMs do not, and overall, she spells her name in a much clearer and less pointy way. After finishing the second E, she also usually goes straight up to begin the following U, but in the TTMs she bends to the right. Also, the final E appears to be larger in the IPs. Thus, I’d say Catherine had a secretary at this time as well, but I am slightly put off by the handwriting on some of the personalized TTM photos, as it is very similar to her real handwriting, but with differences (such as in the Ms in “Merci” or the As in “Amitiés / Amicalement”, the Ps or some Ss). This could indicate she might have had a secretary that imitated her handwriting (?). I’ll leave that open to debate.

So, overall, I’d say that the best way of getting an autograph from the star of films such as “The Umbrellas of Cherbourg” or “Belle de Jour”, would either be in person, or from IP collectors and dealers such as https://www.xpautographs.com/ or https://www.all-autographes.com/fr/ (https://www.facebook.com/media/set/?vanity=all.autographes.paris&am...110186583003694).

I thank you for taking the time to read all of this, and hope it helps future Deneuve autograph seekers to tell the difference between a forgery and the real thing!

To finish off, I leave you one last photo of a rare early 1960s autograph from a (then) practically unknown Catherine: 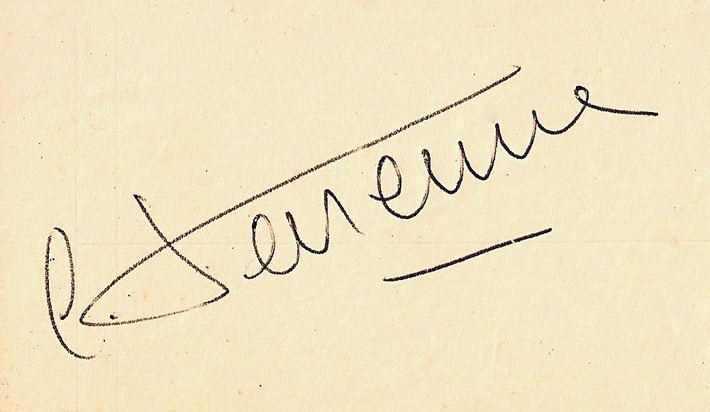 I do not own any of these photos. Here are most of the sites I found them in:

First is my thru the mail from back in the day, followed by my 2 in person. 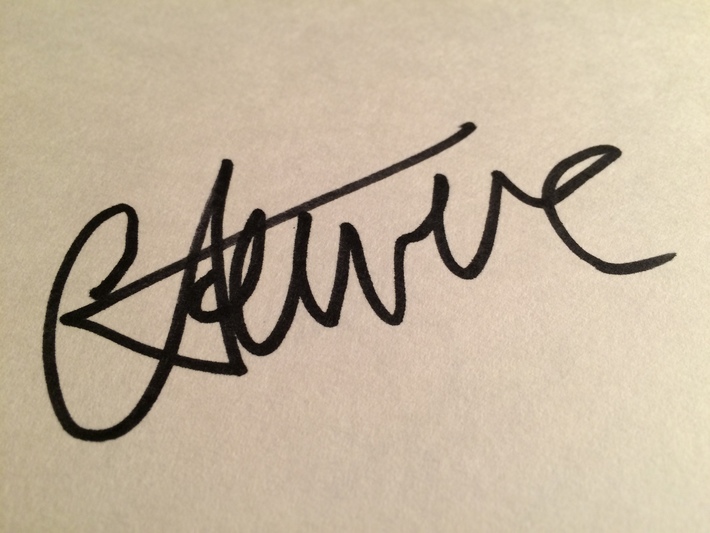 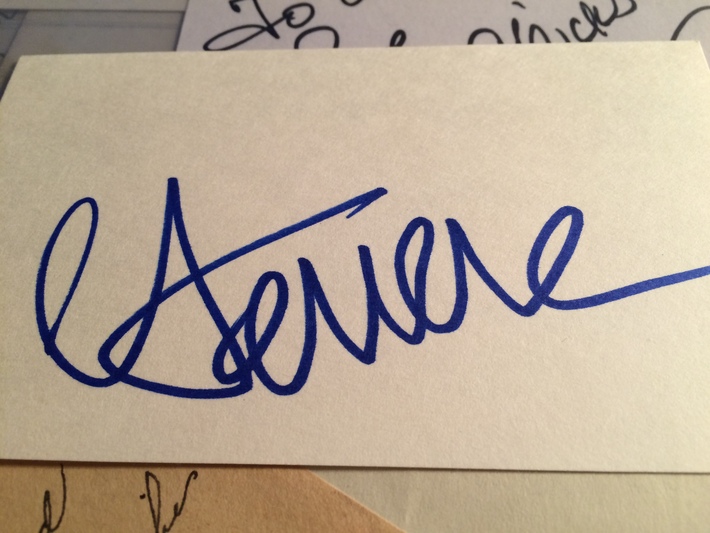 Hi David! Thanks for the photos! They're a great example of how different her signature is TTM and in person. How lucky of you to meet her! I hope it was fun!