Just looking to see if anyone can ID any of the autographs on this skateboard. I purchased this from a local goodwill. It appears that most are from Metal bands, NIN, Pantera, If anyone can ID any of these i would be very appreciative. I can make out Dimebag Darrell and Trent Reznor and what could possibly be Dee Snider. I also see Slayer across the board but im not aware if their signatures are on there. Please help! Thanks I included some higher res attachments

Thanks! I really wish I could Identify others. There are so many on there and I have no where to start but your input is appreciated. Do you think with Autographs from Dimebag and Trent would justify spending the money to get this authenticated from someone like JSA? Not sure if the worth of the autographs outweighs the cost of the authentication process.

Wow,, if this is authentic, and I am seeing some promising signs, you found a gem, and from goodwill, you probably scored a MEGA deal. It just goes to show where you can find some jaw dropping deals out there. If this is authentic, and I am seeing some good signs, as i mentioned, then do you plan to sell or keep? I think you will get some good enough opinions on here, so that if it is authentic you will know.  But if you want to sell it, then getting it authenticated would bring in top dollar. I would suggest asking Roger Epperson to give a quick opinion on it. It costs 15 bucks, and as the more well known guy, i would ask him about the authenticity of the Dimebag signature. He will know if its authentic. If he gives the thumbs up, then odds are, the whole board is real. I will try and name more signatures as i find them.

But the one signature under Slayer, and the Slayer logo itself seems to be from Tom Araya, the bass guitarist of the band, and it looks good to me.

It may be a long shot, but the signature in Yellow under the Slayer logo.........could that be Richie Sambora of Bon Jovi?? Its odd him being there among heavy metal guys, but its a possibility. The S is not done how Sambora typically signs, as he almost always joins the S to the A as he forms the Sa in Sambora. But that could have been rubbed off, or something of the like. It may not be Sambora though, just throwing that out there. Ill keep researching

I also believe, the signature in white, to the right of Dimebag is a messy Kerry King from Slayer

There's a chance the signatures may be authentic. I agree with Carl on the Yellow ink signature looking to be Richie Sambora.

thanks guys i truly appreciate your help. As i stated i bought the board from goodwill because it was a vintage skateboard and i was looking for one to ride around. only after seeing all the signatures did i try to piece this all together. the skateboard was originally stained blue from the factory and whoever owned it painted it black and then proceeded to get all these signatures. so someone took some time and was definitely a fan of metal.

Its amazing that you all have identified some of these signatures, its truly been a big help.

Trent Reznor looks good to me.

What are your opinions on value for this item? I would love to see this go to someone that is a fan of these artists and metal.

thats hard to gauge. Displaying the item being the hardest factor it decreases the market for such an item. I would spend sometime trying to figure out the graphs before value as you may have another gem in there.

I also see Vinnie and Rex from Pantera.

I'm thinking 'Jason' Newsted from Metallica?With a comparison from Bjarne Soderholm here on the site who has a fine Metallica piece. 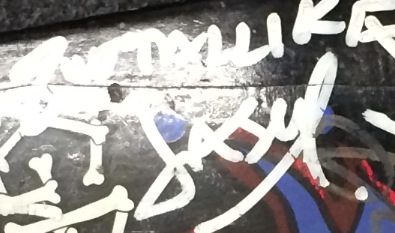 Vinnie Paul- Pantera in gold with my own to compare to. 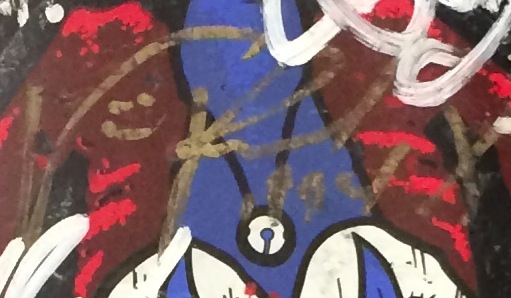 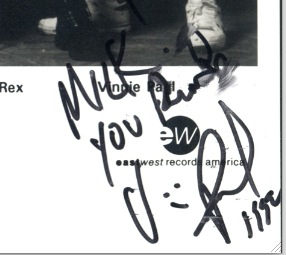 And Rex from Pantera below it, with my own (sorry for the pic quality) And possibly that very faded quick gold one could be Phil Anselmo from Pantera aswell, but that's purely speculation! 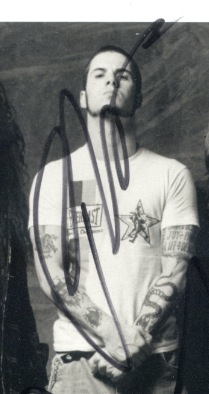