Right now on eBay, there’s an autographed Stephen King book going for $1,295. What makes it interesting is it’s one of the books King wrote under the pseudonym “Richard Bachman.” He did that because of the debate about whether it’s all luck, or you have to really be a good writer to make it, etc. He picked the name based partly on a character from another author he liked, and the last name Bachman because he was listening to Bachman-Turner Overdrive at the time (King has always been a music nut, even buying a radio station in Maine).

Side note: my friend went to see Bachman-Turner Overdrive last year, and they refused to sign an autograph after the show.

Anyway…I’ve never heard of a book signed in the name “Richard Bachman” but have to think they’re out there, and worth a pretty penny. I thought of that when I heard about bids for the latest J.K. Rowling (Harry Potter) book were topping $1,000 on eBay. She wrote her last book – The Cuckoo’s Calling – under the name Robert Galbraith. Rowling’s spokeswoman Nicky Stonehill said that the author signed a few copies of the detective novel. She didn’t elaborate on how those signed copies got out there or who they were presented to. Weird, since “Robert Galbraith” didn’t do any promotional appearances.

I immediately thought of artist Paul Whitehead, who was friends with a woman I was dating. We went to see a gallery of his work in Los Angeles. He had done a few albums, so I brought my copy of the Genesis record Nursery Cryme (back when Genesis had Peter Gabriel singing, and they were good!).

He was happy to sign it for me, and we talked music over dinner. He told me he once did a gallery opening with his work, and also work from a female artist that nobody had heard of (it was him). After he showed up at the reception, he immediately went and changed his clothes, put on a wig, and showed up as the female artist. Nobody ever knew. 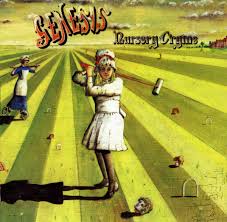 Anyway…I’m guessing when Rowling is out and about, she’d have no problem signing the name “Nicky Stonehill” to anybody that requests that. When I was at a book signing with former President Jimmy Carter, I bought 15 books. As he was signing “J. Carter” in them, I asked if he could sign one with his full name. He did.

Usually these people are good about the requests you make of them, as long as you’re not asking them to pose for 5 pictures with your cell phone; or you’re standing there trying to figure out how the camera even works, wasting everyones time! Hard to believe that was 40 years ago.

And hard to believe Bachman-Turner Overdrive is refusing autographs.  Some acts are so bizarre.

Interesting blog. Thank you for writing it. I was just wondering however about BTO, they are kings here in the great white north and C.F. Turner has always been great about signing autographs. Randy Bachman can be a hassle though. Did both of them turn your friend down or Randy only? Turner is one of the class acts of rock. Only curious. Thank you.

You know what, John. I think you're right. I thought he told me that Mr. Turner did sign an album for him, but Randy blew him off, saying "I'll sign when we tour" (since this was a one-shot show about 8 months ago or something, in San Juan Capistrano).

I have a contract I bought signed by Bachman...some band he was in that I had never heard of. It was $10 in auction, and nobody else bid on it. Nothing nicer than looking at a band signed contract, with everybody signing, right on the line!  (just wish I knew the other band members)

I have sent several letters to Rowling asking for an autograph.  I see from other posts that she has sent authentic signatures but I always get a rejection letter.  I think I give up.

Yeah, it's really, really hard doing the mail route with people that have this degree of fame. Authors are often the best signers thru the mail (sending to the publishing house), but once you reach a level of fame like her and Stephen King - it's very unlikely to get them that way. Good luck in the future, though.