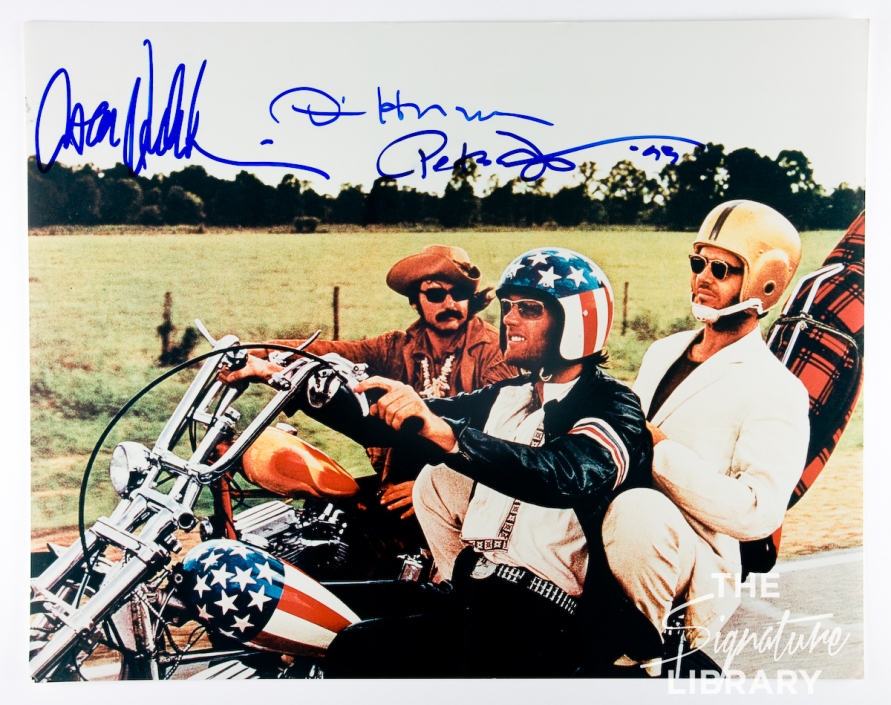 I found a few interesting items happening this week that I thought I’d write about. Now, as a movie critic I have to say – I love collecting movie memorabilia. Having this in my collection would be great, despite the fact that I thought it was a crappy and overrated movie. It’s the Captain America chopper that was customized for “Easy Rider.”

Profiles in History is auctioning off the Harley that Peter Fonda made famous, and they think it will bring in over $1 million (October 18). I think they’re probably right.

Now, I think the better item for a million bucks was the white piano John Lennon recorded “Imagine” on (it went to singer George Michael, who can’t imagine a world with no heaven, no hell, or no truck stops; but I digress).

Michael Eisenberg (no relation to Jesse) is selling it. He once co-owned a motorcycle-themed restaurant in L.A. with Fonda and co-star Dennis Hopper. He purchased the bike from Dan Haggerty (Grizzly Adams), who had the job of keeping the bike in working order while the 1969 cult classic was being filmed.

I think the winning bidder should do whatever it takes to get Jack Nicholson to sign the gas tank (Unfortunately, Hopper passed away in 2010). Now for those of you that think Americans get a little carried away with our collectibles, what until you get a load of this.

A snack company in Japan called “Calbee” had a promotion with a popular singer named Nana Mizuki. They were giving away 10 backstage passes to her concert in Yokohama on August 3rd. There were 10 bags of potato chips that were secretly marked (think Willy Wonka). One guy that would win a debate on who the biggest fan is -- Kazuki Fukumoto. The 25-year-old was arrested for littering, after he had purchased 89 cartons of the potato chip packages, weighing over 400 pounds (no, that’s not his weight, but the weight of the garbage he dumped).

I’m a bit sketchy on the details of how the cops caught Fukumoto. Perhaps it’s the same way the police catch gang members that tag walls with graffiti. They found his trash at six locations around the cities of Akashi and Kobe. The estimates on what he spent trying to win a backstage pass -- $3,000. That doesn’t include what his fine for littering will be.

It all reminded me of a friend I had in my teenage years. He was a keyboard player and some company was giving away one of their new keyboards. I believe the thing cost $8,000 and in their contest, it stated you could enter as many times as you wanted. You had to send in a postcard with your information on it. I showed up at his house one night and he had 1,000 postcards. He said, “I was able to buy these postcards in bulk, really cheap. I figure, each one needs a stamp, so I might spend a few hundred dollars on stamps…at a chance to win something worth $8,000.”

I thought his odds weren’t bad, but advised him against it. I figured enough contests were rigged and it wouldn’t be worth spending so much time and money to enter one (years later I’d work in radio, and see first hand how DJs sometimes rigged contests).

He never won the keyboard. And I’m sure he’s somewhere right now, eating a bag of potato chips.

Love the movie, classic! I also love th bike and the photo. I have the Franklin Mint 1/10 of the Capt. America and Billy Bikes. I have the same photo in black and white signed by Nicholson and Fonda, unfortunately no Hopper. That is the #1 bike I'd like to have in 1/1, maybe a replica someday.