How Far Would You Go?

When I realized that Val Kilmer would be attending Terrificon this August, I immediately thought of my Warwick Davis signed Willow photo, and how incomplete it was without his signature.  A decision needed to be made.  Was it too far away?  Would I regret not attending, since he makes rare appearances?  I did not hesitate, and I immediately purchased a ticket. 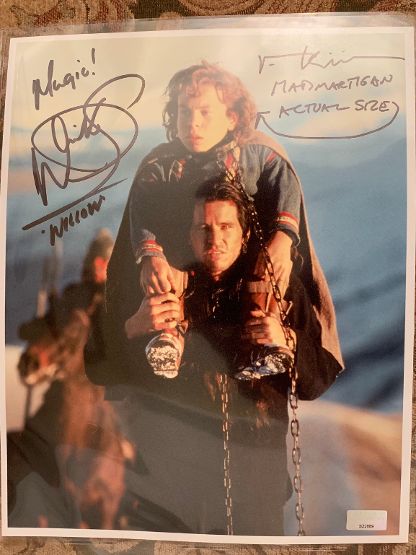 When I realized that Corey Feldman and Ke Huy Quan would be attending Fan Expo Boston the following week, I immediately thought of my Sean Astin signed Goonies photo, and how incomplete it was without their signatures as well.  I asked myself the same questions, and I made the same decision.  I did not hesitate, and I immediately purchased a badge.  I hope to add Jeff Cohen to the photo one day as well.  Hopefully I will not need to travel to Astoria, Oregon in order to accomplish that. 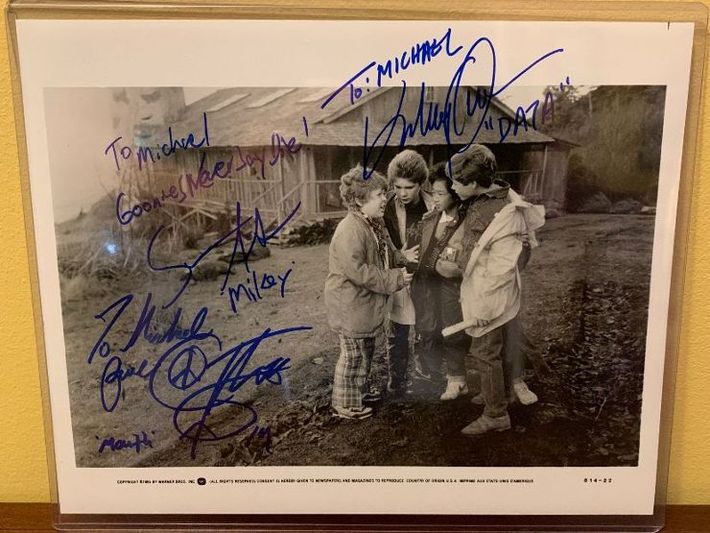 I recently added Corey Feldman and Ke Huy Quan to my Sean Astin signed Goonies photo at Fan Expo Boston.  I hope to add Jeff Cohen to the photo one day as well.

In our hobby, we more often regret not getting an autograph than we do getting an autograph.  I did not want to have any regrets.  As exhausting as my back to back trips were from New York, I was able to add the autographs to my photos, and I am very happy with the results. 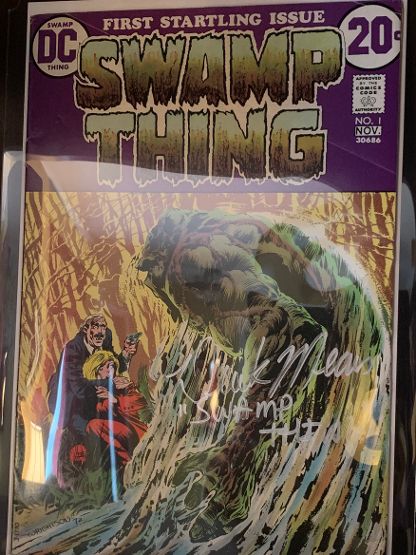 My Swamp Thing #1 comic book that Derek Mears recently signed at Terrificon.  I plan to add Adrienne Barbeau's autograph as well in October.

I am currently planning a trip in October to Salem, Massachusetts in order to add Adrienne Barbeau to my Swamp Thing #1 comic book.  I already had it signed by Derek Mears at Terrificon.  Is this taking my hobby too far?  How far would you go to add an autograph to one of your pieces?  How far have you already gone?

Congratulations! You've been talking about this for some time IIRC. "Nothing good comes easy now, does it?" - Quint (who went a little to far getting his white whale...). But, we are on land, so I say - go for it! I've gone "far" and have never regretted (especially if I sell later!).

Thanks, Eric.  I am very happy with the results.

When it comes to our pursuits. Our passion determines our reward. You have done well!

Nice blog Mike, thanks for sharing!

Thanks, Cogo.  It was a pleasure.

I have a perfect answer to this question, as...I'm somebody that drove from San Diego to Los Angeles, just to get the drummer of The Doors (my favorite band), to sign his new book (and of course, my albums). Oh, I've traveled a lot farther for 'graphs, too.

It should be determined by one thing. Are you going to be happier with that signature on it, and...that you don't spend soooo much time and money, that it's not worth it. For example...I have driven to L.A. (two hour drive) for autographs, and financially...it was stupid. If I ever sold those items, I wouldn't make back what I spent in gas to get there. But I didn't plan on selling them. BUT....that being said...it's sometimes a ridiculous amount of time/money we spend, and you shouldn't do that.

Once when Autograph Magazine had a booth at an autograph show in L.A. at Marriott, I was in L.A. on some business. I hung out with the amazing Steve Cyrkin, and even signed some autographs for fans of our magazine. Well, I had a GREASE cast album, signed by Travolta and Olivia Newton John, the two big guns (I think I bought it for $100 15 years earlier). So, the rest of Grease cast was there. I cringed and spending $25 for no-name actors to sign it, but...where else will I have the rest of the cast sign it??? And Edd Byrnes is a somewhat name (he had a hit TV show and song), and Jeff Conaway was on my favorite TV show -- Taxi (and died after that, as did the gorgeous woman that played Cha Cha). So I'm now glad I did it, but at the time...I spent $25 a person, for 7 people to sign the damn thing. I was regretting it for weeks.

If something's important to you, then it's certainly worth traveling for. Personally, there hasn't been an autograph I've traveled for specifically (i.e a convention appearance or something like that), but I've travelled for concerts in the past, even when the artist touring was coming to the area at some point. Granted, there haven't been many artists I've done that for.

Great stories, Josh.  And the Grease autographs were certainly worth it in hindsight.  One day, I hope to meet the amazing Steve Cyrkin as well.

What was Kilmer charging for an autograph?