I Have an AA Problem -- Autograph Addiction

My wife said I needed help. I think she’s considering having an intervention for me. You see, she witnesses the autographed CDs that arrive in the mail. She thinks I have a problem and I need help. I try to explain...I’m a functioning autograph collector. I can buy autographed CDs and still make a car and house payment. In fact, it would be foolish NOT to buy an autographed CD by artists that sell them. They’re usually the same price.

And I have made progress as an autograph addict. I really have. I never sneak out of the house at 11 p.m., because I know a concert is ending and I can drive right up to the backstage entrance with a record for them to sign.

I know longer call my friends in a panic, because I know they’re going to be hanging out with a professional athlete, asking them if they put a card in their coat pocket to get signed.

The change started to come after two incidents. The first involved Tom Petty (when he was alive, of course). I waited 3 hours for him outside a venue at SDSU, which was fairly easy for autographs. I wore a Petty shirt I had for 20 years. I brought a few of my albums. The waiting...wasn’t the hardest part. It was having him be stoned out of his mind, as he walked by us smiling, looking up at the sky, and not stopping to sign. And when his band pulled up in another van, they were not stoned, but did not stop and sign. Guitarist Mike Campbell even scowled at me.

A week later, Liza Minnelli was playing a venue that’s easy for autographs. Now, I’m not really a fan. I think the best thing she did was playing a ditzy character in the film “Arthur.”

I went to a record store in town that has an extensive dollar bin, and bought two of her soundtrack albums (Cabaret, and New York, New York) for two bucks. I got to the venue and after 20 minutes she came out of her hotel room and walked directly backstage to do a soundcheck. After 30 minutes of that, I made it over to where she’d have to walk. She looked at me and kept walking by. I said, “Can you sign my album?” [side note: if you have multiple CDs or records, never make it plural; say it as if you merely have one, and once they start signing, they’ll see the two others behind it and hopefully power thru them]

At that point, I thought to myself -- what am I doing here? I drove 30 minutes to a record store to buy albums, and another 30 minutes to get to the venue to get her autograph, and I’m not even a fan. Now I have to drive 30 minutes home, being late for dinner, and I have two records I’ll never listen to.

Yet in my defense to the wife, here’s where I’ve made a lot of improvements to my autograph addiction. I will no longer get autographs of someone if I don’t have an item for them to sign. So, if I see Jack Nicholson in a bar, I’m not having him sign a bar napkin. Also, if I’m not a huge fan of someone, I won’t bug them. A lot of that, I will admit to you (but not my wife), has to do with the fact that I’m usually at places as a member of the media. You’re there to interview people, or hang out, not be a fan. I’ve gotten so much better in my addiction that, I’ve been at events, and am more interested in the food then the autograph.

One example of that would be Chargers Hall of Famer Dan Fouts. I thought to myself -- if I go get in line for food, I might miss him. Yet I opted for the food, scarfed it down quickly, and still got him to sign a few football cards.

I did the same thing when I snuck backstage for George Benson. As a handful of people surrounded him, I went to the food. I ate a few sandwiches, grabbed a can of Ginger Ale, and by the time I finished eating...those fans were leaving and he was free to sign my album and ticket stub [side note: he has that smooth jazz voice, but that dude is actually an insanely good guitarist, too]

When Annette Benning and Warren Beatty were at an event, I again went for the food first (and I kicked myself for not bringing my “Heaven Can Wait” poster, as it’s signed by a few people in the cast and it’s one of my favorite sports films).

Yet tonight, before a movie screening, we had an hour to kill so we walked over to the record store that has that extensive dollar bin. I’ll usually find a CD or two that I buy, but not albums. But I saw something that would be like an alcoholic that’s just gotten on the wagon, and comes across a bottle of Jack Daniels he forgot about in his kitchen cabinet. For me, that “bottle” was a record album, in the dollar bin, and it was signed by ALL SEVEN of the musicians pictured on it.

“How can I pass this up?!” I pleaded with my wife.

Her response was, “Who are these guys? Do you even know them?” 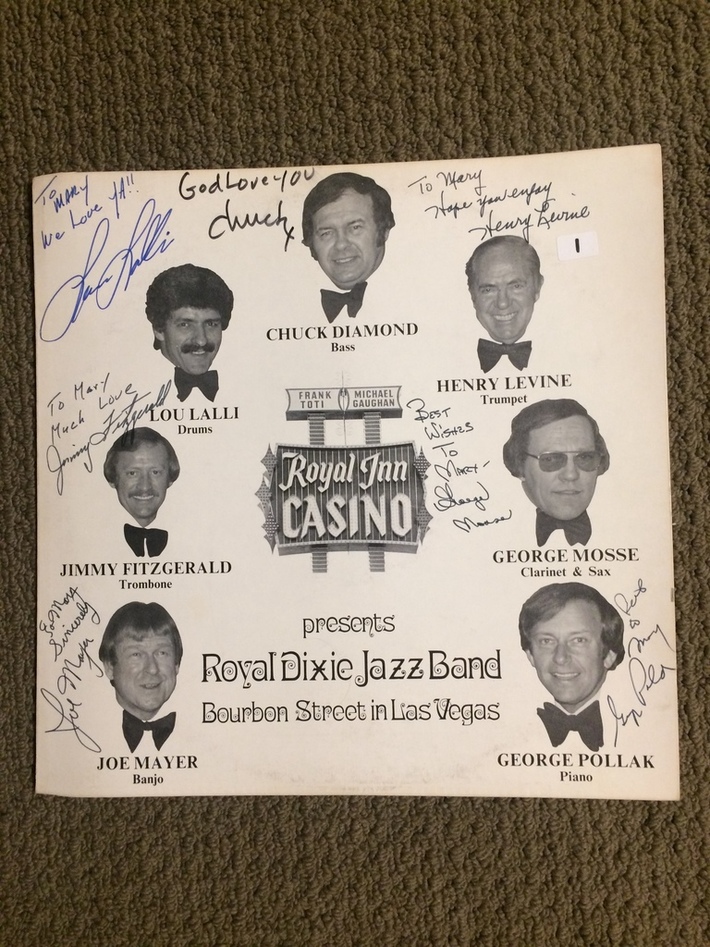 I thought about lying to her. If you lie to your wife, it’s not always bad. How many times have we told them they “don’t look fat” in a certain pair of pants, or “No, I don’t think your best friend is smoking hot. What? Why did I add ‘smoking’ to your question? I don’t know, I thought you said that.”

Yet the reason I didn’t lie and say “Oh, I’ve always loved this band” is because it would have been an obvious lie.

I started getting the shakes. I was craving this album like I’ve never craved an autograph in my life. I tried to think quickly. I brought up the fact that the last time I was at a place that had a cast signed album, I didn’t know the people on the cover. When I got home and Googled them, there were some big names. And for $25, it ended up being a good deal.

In trying to convince her of this purchase, I told her that it was one dollar! I go to 7-11 all the time, and spend a dollar for a Big Gulp. She replied, “Yeah, and I don’t like that either. Soda is horrible for you, and you drink it all the time.”

I thought about bargaining. I could tell her I wouldn’t drink soda, if she lets me continue on with my autographs.

She rolled her eyes as I brought it to the cash register. The guy working there saw the record and laughed. Who could blame him?

It’s a group called the “Diamond” (the album doesn’t even show their name, I had to find that on the back). On the cover, it merely says “Royal Dixie Jazz Band.”

It’s personalized to “Mary” (if there are any Mary’s out there that are interested, I’m sure I’d be willing to let it go).

I googled each of these guys. The one who has accomplished the most, seems to be George Mosse, the clarinet & sax player, who also looks the coolest on the cover. That’s because he doesn’t have one of those dorky mustaches (the record did come out in the early ‘70s). Mosse is also wearing sunglasses, and he supposedly plays the sax in the hit “Yakety Sax.”

What, you don’t know that song? Sure you do. It’s the Benny Hill theme song.

My name is Josh Board. I’m an Autograph Addict.

It's a cool hobby Josh . Whatever pushes your buttons!

BTW, Boots Randolph played the sax in Yakety Sax. I actually seen him in concert along with Chet Adkins and Floyd Kramer. And didn't even consider asking for any autographs. I handle my addictions better than some!

Yeah, I just googled that and you're right! I thought the only "Boots" in music was Bootsy Collins, the fabulous bass player.

As for the other stuff, you may need a sponsor! ;)

it is a fun hobby! awesome story as usual josh and happy fathers day to you and all the other fathers out there!

Love reading your stuff Josh, reminds me of my favorite writer Mitch Albom.

Thanks for the kind words, Steve.