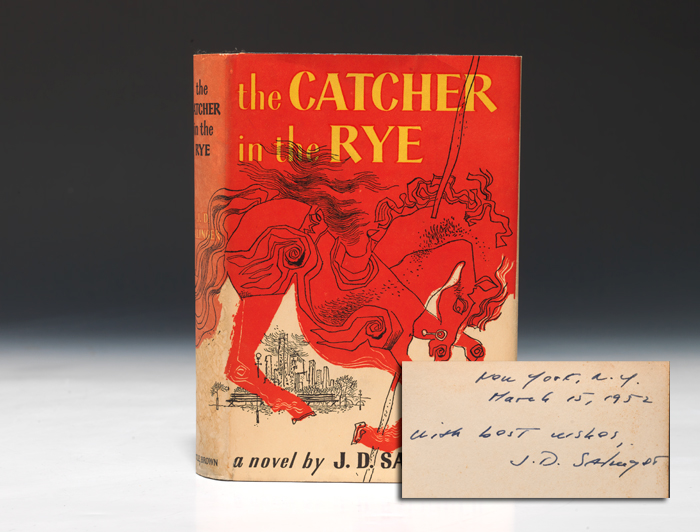 As a movie critic in San Diego, I often post my reviews on my Facebook page. When I did that for the documentary Salinger, I included this: If anybody has a 1st edition of Catcher in the Rye, can I have it?

One of my friends did some research on the internet, and found this one for sale. I thought I’d share with you.

Bauman Rare Books has not only a 1st edition, but one that’s signed. For $65,000, this classic can be yours.

I’ve seen other 1st editions (that weren’t signed) going for thousands of dollars. I recall seeing one go for $24,000 a few years back.

The book is considered by many to be the greatest American novel ever written. It’s bizarre to think that three assassinations were partly inspired by it.

Obviously, Salinger autographs of any kind are scarce. Although after watching the documentary, I realize that letters he wrote to teenage girls weren’t as scarce. That’s part of his courtship ritual. Although, you may remember that ex-girlfriend Joyce Maynard auctioned off 14 love letters he wrote her. They sold for $156,000 to Peter Norton – who promptly gave them back to the reclusive author (no word on if he peaked at them before returning them).

This early printing of Catcher in the Rye was six months after its first printing. Since its publication in 1951, only a few signed copies have ever appeared on the market.

More descriptions of it, for those that have the means: text fresh with only light scattered foxing, mainly to preliminaries, slight edge-wear to cloth; colorful dust jacket spine with faint toning, mild dampstaining. A most desirable extremely good inscribed copy.

I recommend the movie, as it was fascinating to find out so much about Salinger. It was a pleasant surprise to see Autograph Magazine contributing writer/editor Larry Grobel featured in it as well.

I'd prefer the Corvette as well. I do like the book though.