It was difficult to decide about the band which I want to write in 3rd episode of my blog. There were two options – presumably very long article about Queen+…. or slightly shorter one about different band. Finally I made a decision - it won't be about Queen+ - but they will follow soon, I promise!

Hardrock triumvirate? Three founders of hardrock and heavymetal? European and American taste is slightly different here (because I know that especially Deep Purple are much bigger band in Europe than in US), but from my point of view - all these definitions fits to the Golden Triple of Hardrock: Led Zeppelin, Deep Purple and Black Sabbath! Each one of them unique, each one of them very different and each of them with more or less tangled history. We are going to talk about the one with the most complicated story which still continues - it's going to be about a band which hired three singers which were discovered by Ritchie Blackmore - (in chronological order) Ronnie James Dio, Ian Gillan, Glenn Hughes... and they even considered hiring David Coverdale - but it never happened. Despite the fact I mentioned such a huge names, most famous singer of this band is Prince Of Darkness - Ozzy Osbourne.
I dont remember my first "meeting" with Sabbath music to be honest... My first show of Black Sabbath came in June 2005 - they played with Soulfly (I really dont remember much about their set, because they are completely out of my interest - way too heavy band for me) and Velvet Revolver (I remember being stunned by Slash and extremely annoyed by Scott Weiland's attitude). In fact - this my first show still is the only show of complete original lineup of Black Sabbath (Iommi - Osbourne - Butler - Ward) in our country. It was stunning performance during extremely hot day (I think that it was near the temperature record that day) and old venue used to have a very bad ventilation - which led to rather awful situation - I remember people standing on the floor talking about condensed sweat falling from ceiling. But - the Sabbath show itself was just as hot - energic, Iommi was just MAGIC (I have seen many top-league guitar players, but his "aura" is really something unique) and suprisingly - man who amazed me most (with Tony) - Bill Ward - his style of playing was as near to another heart attack (he had one in late 90s) as possible - and I miss his playing a lot during current Sabbath recording and touring... Sad incident between Sharon and Iron Maiden happened couple of months after the show and I thought to myself "what a bad way how to end the career of such a great band".... Dont worry - I'm going to move on faster.... :)

Rumours about cooperation between Tony Iommi and Ronnie James Dio appeared about one year later! WOW what a chance! Dream became true - June 2007 - my first (and sadly the last) show of Heaven and Hell..... and also one of my biggest regrets - I missed an opportunity to meet this man with great voice, because as I found out much later - he was very kind man who signed for everyone who asked him to do. But at least - I saw him! May 2010 - Ronnie died. What a sad end of great chapter of whole complicated story.

11/11/11 - reunion press conference, what a hype and then what a disappointment. Did they really announce reunion without fully signed contracts? It doesnt matter - let's go and see them! Tickets for our Sabbath show went on sale just couple of days after announcing the dates and I bought them on first day.... Then - another terribly shocking news came in! Tony Iommi fights with cancer....  tour is changed into Ozzy&Friends tour. OK - finally let's try to get some autographs! O2 Arena? Impossible to get them at venue. Hotel? Which one? I waited for two hours at wrong place when intuition tell me "go to other one!".... I met some people there and what a coincidence - just 10 minutes after my coming - Geezer Butler leaves the hotel. You know that - we all said to each other before - "fine, let's be calm, no run, no pushing, just make a line and wait here...." - Geezer appears and... like nothing had been said - some people act like animals in jungle.... Geezer rushes into his car and we got nothing! Luckilly - finally everyone found out that it doesnt work well like that, so let's try different thing next time - if there is going to be any next time. Ozzy's PA came to us and at first moment he is very strict - no signing, no meeting, no chance.... finally one guy suggests compromise. The result? "Gimme small items like booklets, photos etc. - I'll give them to Ozzy to sign them and bring them back to you, but you won't meet him, he has to go on soundcheck..." - fine, fair offer, much better than nothing!

Funny story happened after the show..... I was near to sound engineer and I hoped to get the setlist from him. First guy came in and shouted at him "hey hey soundguy, gimme a setlist!", engineer looked at him with anger face (like when you bother someone during his own work) and gave him the first one (they had about five of them there), another guy - same story... I said to myself - let's try it different!  "Please excuse me...." - he turned to me in suprise like he hasnt hear those words in years.... "yes?" - "could you give me one setlist please?" and with great smile on his face he told me: "of course!" - "thanks....". What the hell? I want something from him - is it difficult to be polite? No, it's supposed to be natural thing! 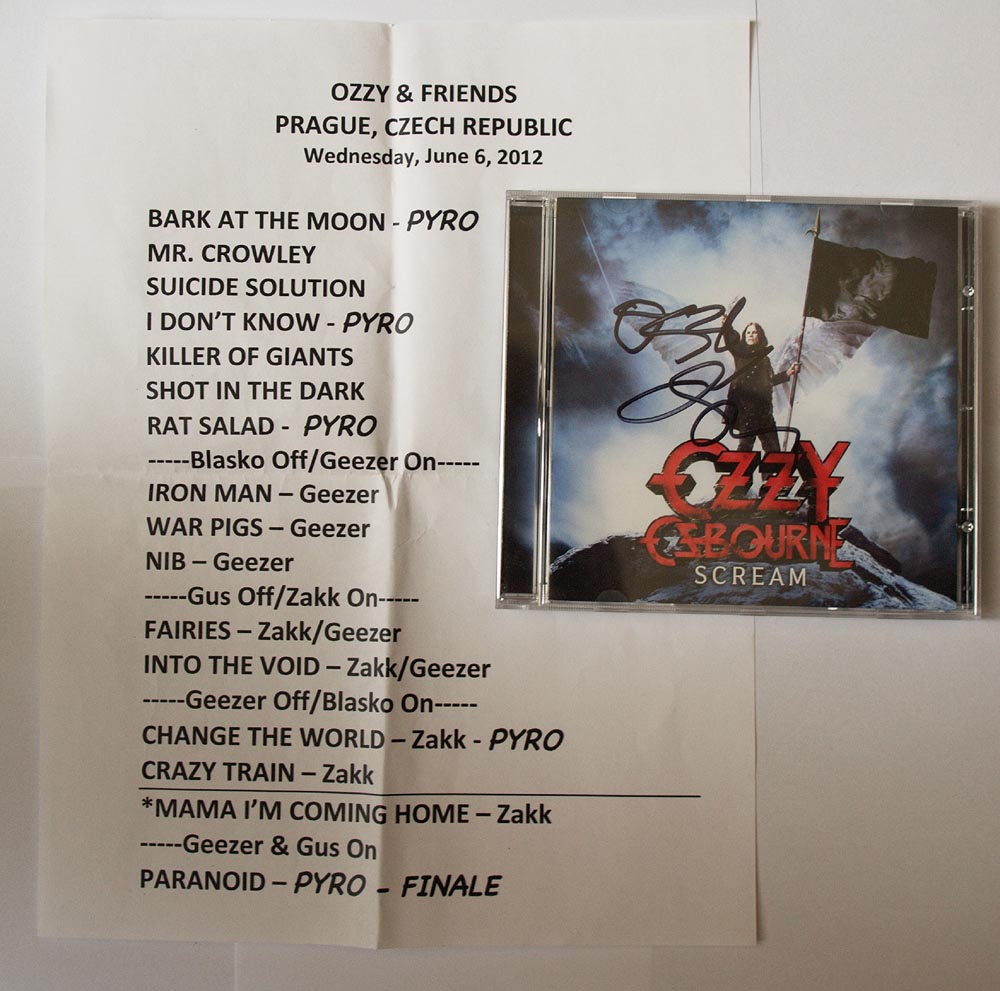 And now - main story - the reason why I wrote all this stuff! December 2013 - Black Sabbath gig in Prague... I NEED to get an autograph of Tony Iommi - at that time my #1 on wishlist.I got an information about their arrival but I was informed a bit wrong - they arrived two hours later than I was originally told from my source. But they arrived and suprisingly - they were in pretty good mood and they signed stuff for us. Some guy from their crew told us rules again - just one sign per person.... fine, better than nothing. Ozzy comes first - aaaah - nothing cant be perfect - silver marker isnt working properly and Ozzy himself must make the marker start to write (that's why his autograph looks so strange...). Tony comes second. The guy next to me has Seventh Star album. Tony takes the cover in his hand, turns to guy behind him (someone from his crew obviously) and says "I still remember taking pictures for this cover - we did it on the desert, yet we all had frozen a**es!"... I had planned to tell him something like "best wishes", "thank you for all the music you have done" or "you look great!" (he really did, not like man who was going through chemoteraphy just couple of months ago) - something like this, but after his one-liner? My only issue was not to start to laugh like fool when he signed my album... Finally - Geezer comes.... and I'm suprised! To be honest - we didnt expect to get autographs from all three of them and I didnt expect that it's possible to fullfill all expectations (about personality and sense of humor) by saying ONE sentence! Tony Iommi managed to do that and I thank him very much. I have to chuckle everytime when I see the Seventh Star album cover and listen to this record.... He is one of my guitar heroes and definately one of the greatest personalities in rock history! I was in LA once hanging out on the Strip, and in walks in this guy, that a few people were making a big deal about. I was eating lunch at the Rainbow, asked the waitress who it was. "Glenn Hughes" she said. "He's always in here, and he's super nice."

On an unrelated side note: I have A LOT of signed Ronnie James Dio stuff, if you want to ever make a trade, just let me know.

Comment by Paul on August 4, 2015 at 10:22pm
Cool story. Ozzy said when he dies they will give his autograph away with tampons because he has signed so much. Lol.

I hope that despite many mistakes I have found - it´s all understandable. :)

Josh Board:
Thanks for your offer, but it´s very difficult to trade stuff obtained "in person".... when you know all the story about that piece. Nostalgia. :)