As a movie critic, I always laugh when there are autograph scenes in movies. Many times, they’re done poorly. The most recent one I saw was in the film “The Identical,” which is a fictional story about the twin Elvis Presley had (he died at birth), but they wrote it as if he lived. There’s a weird scene late in the movie where a great Elvis impersonator (who is the twin brother) gets mobbed for autographs at a county fair. He was pinned against the bus. Really…I don’t think Elvis impersonators get bugged for their signature. Perhaps for a scarf during a show, but…

Now, another Olympic gold medal. Last time, I talked about the bronze that Carmelo Anthony auctioned off. This is a much more interesting medal. It’s from the famous “Miracle on Ice” hockey game in 1980. Easily one of the biggest upsets in sports history.

Heritage Auctions took bidding on April 25th, so I’m guessing that auction has passed. Anyway, Mark Pavelich, a Minnesota collegiate player on the team that beat the Soviets, won that gold. He’s 56-years-old, and said it will help his kids education. 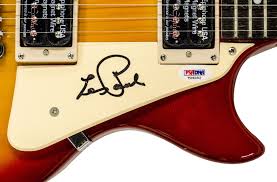 I saw this a small piece in a magazine. It was a series of quotes with Kevin O’Leary. He’s some Canadian billionaire on the show “Shark Tank”, and the magazine was asking them various questions about their finances and what it takes to make it big. Anyway, they ask him the best deal he ever made, favorite quote, etc. When they asked him the biggest thing he ever splurged on, he said, “Probably my signed Les Paul guitar, which I paid a ridiculous price for.”

Always like when somebody appreciates their signed items. I have a friend that won a signed Les Paul guitar when the guitar maker was on 95.5 KLOS FM in Los Angeles about 25 years ago. They gave away 5 of them, and he called in and won one. I swear, I bugged him for years to sell it to me. He ended up getting it signed by other guitarists that played Les Pauls’, and that made it priceless to him. Unfortunately, he’s also a musician, so…he liked to play it. Of course, the signatures eventually became a bid smudged and faded. One day I was at his place and the guitar was in the corner. The signatures looked nice and neat again. I didn’t ask, but I feared the worst. He probably went over them with a Sharpie. Agggghhhhhh!!! And, in the paper the other day, I saw country singer Waylon Jennings’ belongings are going to be auctioned in the fall. Some of the more interesting items include some hair from Willie Nelson’s braids. And an item that I’m sure Paul McCartney or Jay Leno would love (he collects rare motorcycles and cars, he’s a big Buddy Holly collector). It’s a rare 1958 motorcycle originally owned by Buddy Holly.

Guernsey’s auction house is going to have these and over 2,000 items up for bids on October 5th at the Musical Instrument Museum in Phoenix. Start saving your money if you want a cool item!