I was talking to an old DJ I once worked with in the ‘90s. Rock and Roll Peg was not only the highest rated DJ in San Diego, she was a sweetheart. She knew I liked collecting autographs, and as the newest and youngest guy at the station, she was often hooking me up.

She interviewed the band Living Colour – got me a signed CD. Backstage at Joe Walsh, she got me a personalized signature. The amount of times she got things signed for me was endless.

I recently told the story about how when she was going backstage to interview Rush, we got thwarted with the drum symbol I wanted signed. She did the interview, I didn’t get the autograph.

Well, the other day we were talking music and I shared a story with her. 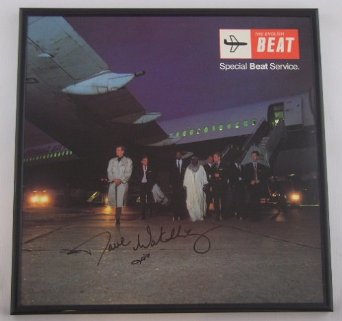 I was interviewing singer Dave Wakeling for an article I was writing in the San Diego Reader. Usually if I interviewed somebody for a story, I’d ask them a few autograph related questions, and do a second story for Autograph Magazine.

I asked the former General Public (“Tenderness”) and English Beat (“Mirror in the Bathroom”) singer to give me a few. He did tell me a few good ones, but the one I remembered that I shared with Peg was one of the best ever.

He told me the band was performing a show that sold-out a 900-seat club in Ireland. The air conditioning had broken and it was over 100 degrees in the packed club. He couldn’t stop sweating onstage, and he told the crowd after the show he’d sign autographs in the back.

After the gig, he walked over to the merchandise booth to sign items. The first woman to approach was carrying an English Beat album, and he quickly wiped his face and head, fearing he’d drip sweat all over her item. He smiled looking up at her, and said, “It’s an oven in here, isn’t it?”

As she handed him the album, she replied, “It’s broilin’.”

Having been so used to people wanted the albums and CDs inscribed to them, Wakeling thought that was her name. He started to write “To Broylen” but when he got to the letter “y” he asks her how to spell that. She had no clue what he was talking about, or what he was writing on her record.

Peg laughed and said she had a similar story. She was dating a guy named Len, and so often when he got things autographed backstage, they’d spell his name wrong. She said, “I don’t know why, but…they’d often put a ‘y’ in there.” 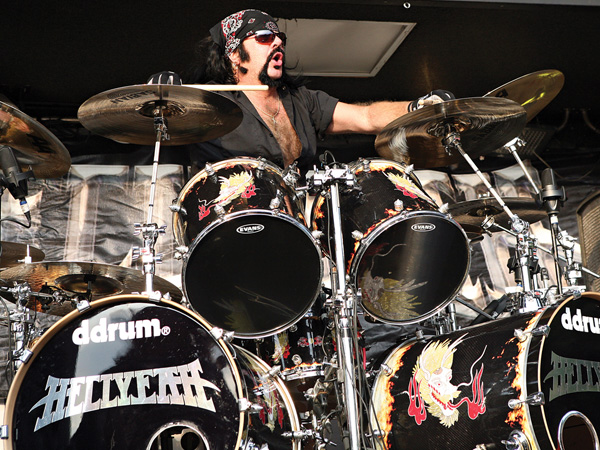 So, she’s interviewing the heavy metal band Pantera. They were huge in heavy metal scene, but might be more well known to non-metal fans for the bizarre thing that happened onstage in 2004. Guitarist Dimebag Darrell, voted one of the 100 best guitarists of all-time in Rolling Stone, was shot and killed during a performance (the same day as John Lennon’s murder). That guitarist formed Pantera with his older brother – drummer Vinnie Paul. The band often came into our station for interviews (although I never got an autograph, because I wasn’t the biggest fan of the whole “groove metal” thing they did).

Peg told me her boyfriend Len wanted Vinnie Paul to autograph a drumhead for him. Knowing people often spelled his name wrong during autograph requests, she told Paul, “His name is ‘Len’. L-E-N.”

Right before he was to sign the drumhead (nothing better to have a drummer to sign…it’s big, round, white…easy to see the signature), she repeats the same thing, spelling his name.

She’s handed the drumhead back and sees that the name is spelled “Ellie Ann.”

Her boyfriend Len didn’t seem to mind. He chuckled about it, and hung the thing on the wall.

When Peg was backstage at a concert years later, she reminded him of the story. He didn’t remember it, or think it was all that funny. Now, I thought it was funny when I handed Todd Rundgren a photo my friend took of him onstage with Ringo Starr and Joe Walsh. He loved the picture (Walsh was dressed as the Energizer Bunny as Rundgren sang “I don’t wanna work/I wanna bang on my drum all day!”).

I love the piece.

On a side note: I once got Rundgren to sign a few albums for me before a show, and this bozo was standing behind me with 20 albums. Rundgren’s wife laughed and said, “He’s probably going to sell those.”

He asked who he wanted them inscribed to and the guy said, “Oh, well…uh…don’t make them out to anybody.”

Rundgren looked back and said, “Yep. He’s an autograph dealer,” as he signed all 20 for the guy. That “fan” responded, “I’m not. They’re for my boss. He’s a collector.”

Luckily, with the name Josh, I rarely have misspelled inscriptions. And just a note to all you autograph seekers – it’s gotten a lot harder over the years for many reasons (ebay, paparazzi, etc.). When they agree to stop and sign and ask, “Who should I make it out to?”

It’s best to give your name. Sure, the piece will be worth less when you die and your kids inherit it, but it lets the stars know we really are fans and autograph collectors that aren’t just trying to make a buck off them.

I don't mind if the artist asks what my name is before signing.  Sure, I prefer not getting something personalized, but if that's the only way they will sign (Don Felder) then I'm fine with it.

I once asked Herschal Walker if he could add "Two time Pro-Bowler" to his photo.  Of course he said, and I ended up with "To: Time" and "Pro Bowler" underneath that.   Oh well.

Okay, that Walker story is easily the funniest autograph/personalization story I've EVER heard -- and I've got millions!!!!

Comment by Cogo on August 29, 2015 at 12:56am
As a ten year old I met a famous swedish hockey player (Håkan Södergren) so I thought I would ask for his autograph. This were the first time I've ever done that so I were pretty nervous and when I somewhat stuttering asked him he replied:

Jan Cogo -- you reminded me of a story about a basketball player I met when I was only a few years older than you approaching the hockey player. I wrote that story on my last block. Look for it.

Finally, after trying 4 times, I met Todd Rundgren last night.  He signed 1 per but asked if we wanted to take pictures with him.  Very cool.  There were 5 of us waiting, and he signed from his car before he left.  I was happy to finally get him.