The big story regarding “valuables” happened recently and by now, everyone has heard about it. An older couple walking their dog in Northern California and came across a few buckets of gold coins from the 1800s. They’re worth around $10 million, and while they were smart in not saying who they are or where they live (don’t need a bunch of people showing up with metal detectors and shotguns!)…I think they should’ve been quiet about it all together. First, the IRS is already saying they’ll be collecting 50%. But…what happens if they find out a bank or mint was robbed back around that time? And the same amount of buried treasure is what was taken? I’m guessing those folks don’t just get to keep their treasure trove.

As somebody that is fascinated by autographs, I enjoy stories about finding signed things much more fun. That person cleaning out an attic and finding an original Declaration of Independence; or a woman finding a signed Beatles album in the garage that her mom got while she working on the Ed Sullivan Show, and she had forgotten it was even in a box of her belongings.

Another recent story got me thinking about people that collect autographs of religious figures. I would find it odd to ask the Pope or Dali Lama for a John Hancock, but suppose I might. You never know when you can trade an item like that for something in a genre you prefer.

The other day, Pope Francis was given a jersey by Brazilian President Dilma Rousseff. It’s a national team jersey that is signed by Pele – the greatest soccer player of all time, and also a ball signed by Ronaldo – one of the most popular soccer players today. The Pope joked that he might start supporting Brazil over his native Argentina in the upcoming World Cup. Ahh, bribery. What does their religion say about temptation?

Pope Francis has been a lifelong fan of the Buenos Aires club San Lorenzo, and actually has a decent sized collection of jerseys. The one signed by Pele is inscribed, “To Pope Francis with respect and admiration.”

The soccer ball was signed, “To Pope Francis, a big hug from your friend, Ronaldo.” 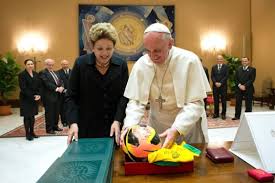 Rocker Rod Stewart, an avid soccer player, often kicks balls into the crowd during concerts. If only the Pope would decide to do this at his next speaking engagement. Come on! Isn’t it better to give than receive?

I'm a huge fan of the idea of serendipitous attic finds. My wife and I like going to estate sales and we recently purchased a cool set of 19th century French copper cookware that was heavily marked with numbers, initials and crowns.  We bought the set for a good price and liked it because it has "the look." We tried researching the crowns, assuming one was a maker's mark.  After extensive research and conversations with experts it turns out the crowns are the signatures of royalty.  The set was owned by two royal families, one of which was likely Napoleon III!  People back in those days would mark their stuff so it couldn't be stolen and so the people who retinned the pots would know who's was who's in their shops.  Estate sales are a great way to make great, cheap finds!

As you said josh! what if that gold belongs to a bank or if it is on someone elses property! i myself would love to find a mint condition of a monkees album signed by all  four in a attic or barn some where lol!

Carl, this Pope is actually a great man; the only reason he'd be in jail is to visit the prisoners and offer prayer services like he's been doing.

I agree with you, Josh.  If I were to find those coins, no one would know about it.  $5million after taxes is still a lot, but now the whole world knows about it.

I am guessing the post by Carl was deleted as I don't see it.

I'd like to see the pope try the jersey on. That would be a Kodak moment.

I hope to find a can of gold any day now. Maybe I am not trying hard enough. Anyone have any pointers for me?

LOVE READING UR BLOGS.  I AM GOING TO SAN DIEGO TO SEE WILLIE NELSON IN APRIL.  IS IT POSSIBLE TO GET ANY AUTOGRAPHS AT HUMPHREYS CONCERTS BY THE BAY?  I HAVE A RECORD ALREADY SIGNED BY MERLE HAGGARD AND WOULD BE OBLIGED IF I COULD GET BIG WILL NELSON ON IT.

Hey there JoJo Gunn (anybody remember that song?)

Humphrey's by the Bay in San Diego (Shelter Island) used to be great for autographs. The last few years it's gotten harder. New security, and they can be jerks. Good thing with Willie is...he's a great signer, and his bus at that venue, parks across the street (near the water). So, he walks across the street and is easy to score. Good luck!  Oh, my friend shows up with guitars at the venue, and I always give him crap. It creates such a bad vibe. The road crew are on alert, thinking you're doing ebay stuff. The artists don't like it. So...just show up with a few albums. Have them covered as you're hanging out...and when you see slick Willie -- you'll get your signature.

YOUR GOD DAMN RIGHT I WAS WAITING FOR THE MAN OF ALL MANS THE GREATEST OF THE GREAT THE BEST OF THE BEST BRUCE SPRINGSTEEN BOUT 2 YEARS AGO IN SAN JOSE BRUCIE COMES OUT AND HIS GUARD SAYS GET IN A LINE AND BE CALM HE WILL DO AS MANY AS HE CAN IF NO ONE PUSHES SOME A****** WITH A GUITAR RUNS UP TO BRUCIE AND BRUCIE GOES SORRY GUY I DONT SIGN GUITARS AND THE GUY GOES WHY THE F*** NOT BRUCIE GOES ONLY FOR CHARITY AND THE GUY STARTS WHINING AND BITCHING BOUT HOW MUCH HE WANTS THE GUITAR SIGNED AND BRUCIE IS JUST STANDING THERE STILL TALKIN TO THE OTHER FANS BRUCE SIGNED A BORN IN THE USA RECORD FOR YOURS TRULY BUT MANY PEOPLE DID NOT GET OLE BRUCY BECAUSE THE GUY WOULD NOT STOP YELLING AT HIM AND OLD BRUCIE EVENTUALLY SAID ENOUGH IS ENOUGH AND LEFT BEFORE BOUT 30 PEOPLE GOT A GRAPH.  IF SOMEONE SHOWS UP WITH A GUITAR I MAKE SURE I GET IN FRONT OF THEM CUZ ONCE THE PERSON SEES THE GUITAR S**** COOKED.  ONE TIME I SEEN FLEA FROM THE RHCP UP IN THAT SANTA BARBARA I SAYS TO HIM I SAYS FLEA DO U MIND SIGNING MY GUITAR AND HE GOES GET THE F*** OUTTA HERE WITH UR GUITAR B******* EVER SINCE THEN I STICK TO MY RECORDS AND CDS AND PHOTOS NO SIRREE BOB I DO NOT NEED NO FANCY GUITARS SIGNED ILL TAKE A VINYL ANY DAY OF THE WEEK

AND ANOTHER THING I DONT KNOW WHY ALL THESE 20 YEAR OLDS COME OUT WITH 140 THINGS FOR TONY BENNETT TO SIGN WHEN TONY BENNETT WAS BIG THEY WERE STILL S******* THEMSELVES.  I WAS TALKING TO MY GOOD FRIEND PAUL NELSON ABOUT 3 YEARS AGO, GOOD MAN THAT PAUL NELSON IS.  ASHAME HE COULD NEVER PUT DOWN THE BOTTLE.  ANYWHO, I WAS TALKING TO MY GOOD FRIEND PAUL NELSON WHEN PAUL SAYS TO ME HE SAYS JOJO THOSE GUYS JUST SELL THAT S*** ON EBAY I SAID WHAT HE GOES THEY AINT FANS OF OLE TONE BENNETT THEY JUST FANS OF THE ALMIGHTY DOLLAR I SAYS TO PAUL I SAYS PAUL DONT U THINK TONY WOULDNT SIGN FOR THEM IF HE KNEW THEY WERE SELLING IT PAUL SAYS TO ME JOEY WHY DO YOU THINK THEY TELL HIM ITS FOR THEIR MOTHER OR THEIR COUSIN IN THE HOSPITAL I SAYS TO PAUL PAUL I DOUBT THATS TRUE PAUL SAYS TO ME LOOK AT EBAY YOURSELF SURE ENOUGH I GO TO EBAY AND TYPE IN TONY BENNETT SIGNED AND WHAT COMES UP BUT A FEW HUNDRED ITEMS.  ITS A REAL SHAME WHEN I WAS A BOY YOU WALKED UP TO A BALLPLAYER AND THEY WERE MORE THAN HAPPY TO SIGN A CARD OR BALL FOR YOU NOW HALF THESE GUYS WONT LOOK AT YOU I WAS TRYING TO GET OLE MARK MCGWIRE TO SIGN AND HE WOULDNT AND I SAYS TO HIM I SAYS MARK I FOUGHT IN NAM SO YOU HAVE THE RIGHT NOT TO SIGN AN AUTOGRAPH FOR ME HE SAYS TO ME SORRY SIR AND WALKED OVER AND SIGNED MY CARD REAL NICE AND ALL.  I SAYS TO HIM MARK I KNOW UR A GOOD GUY AND ALL BUT DONT BE A COMMIE AND MARKY SAYS TO ME PEOPLE JUST SELL THIS S*** HOW DO I KNOW YOU SERVED IN BATTLE AND NOT JUST SOME A****** SELLING THIS I SAYS TO HIM MARK THATS A GOOD F****** POINT AND HE SAYS HERE YOU GO SIR HAVE A NICE DAY AND I SAYS YOU TOO MARKY BOY.  I GUESS THE POINT IM TRYING TO MAKE HERE IS THAT TIMES HAVE CHANGED AND UNFORTUNATELY THEY DONT LOOK LIKE THEY ARE GOING BACK.  SOME PEOPLE HAVE NO MANNERS NOW A DAYS THEYRE MORE THAN CONTENT TO PUSH YOU AND TELL YOU TO GO F*** YOURSELF IF YOU SAY SOMETHING.  I WAS UP IN LOS ANGELES WHEN KEVIN DURANT STARTS SIGNING I PUT MY CARD OUT AND SOME YOUNG BOY PUTS HIS SHOES ON TOP OF MY CARD I SAYS TO HIM BOY YOU BETTER MOVE THOSE I WAS HERE FIRST AND HE SAYS TO ME F*** YOU OLD MAN I SAYS TO HIM I SERVED IN NAM SO YOU HAVE THE RIGHT TO TALK TO ME LIKE THAT AND HE SAYS LICK MY ASS AND I SAYS YOU MUST BE A COMMIE AND WHATYA KNOW HE GETS KDS AUTOGRAPH AND I GET DIDDLY S*** AINT THAT THE WAY LIFE WORKS JOSHY BOY.

Um...you bring up some good points. The ALL CAPS is kinda hurtin' my eyes a bit, Joey boy!