When You Should NOT Ask for Autographs -- M. Night Edition

As a movie critic, I often have the opportunity to interview actors and directors. And sometimes, after the interview, I'll ask them to sign a DVD of a favorite film of mine.

I've gone to other events, where it's not appropriate to ask for autographs, so I don't. The one time this really hurt was when I was doing sports for a radio station, and had a press pass to the first "dream team" when NBA players were first allowed into the Olympics. I interviewed most of them. The players had Magic, Barkley, Bird, John Stockton (who yelled at me for taking a picture of him dribbling, for some reason), and many more Hall of Famers. We were told NOT to ask for autographs, and I would have loved to.

Well, M. Night Shyamalan posted this on Twitter, and it made me wonder -- how in the world is this appropriate for our court system to do? You be the judge (pun intended). This was his tweet on Twitter:

Went for jury duty. Wasn’t selected for, as it turns out, a very serious trial. But was very touched by all involved and the responsibility they and all of us hold. As I left, staff printed out posters of their favorite films of mine to sign. Lovely people. Wish everyone peace. 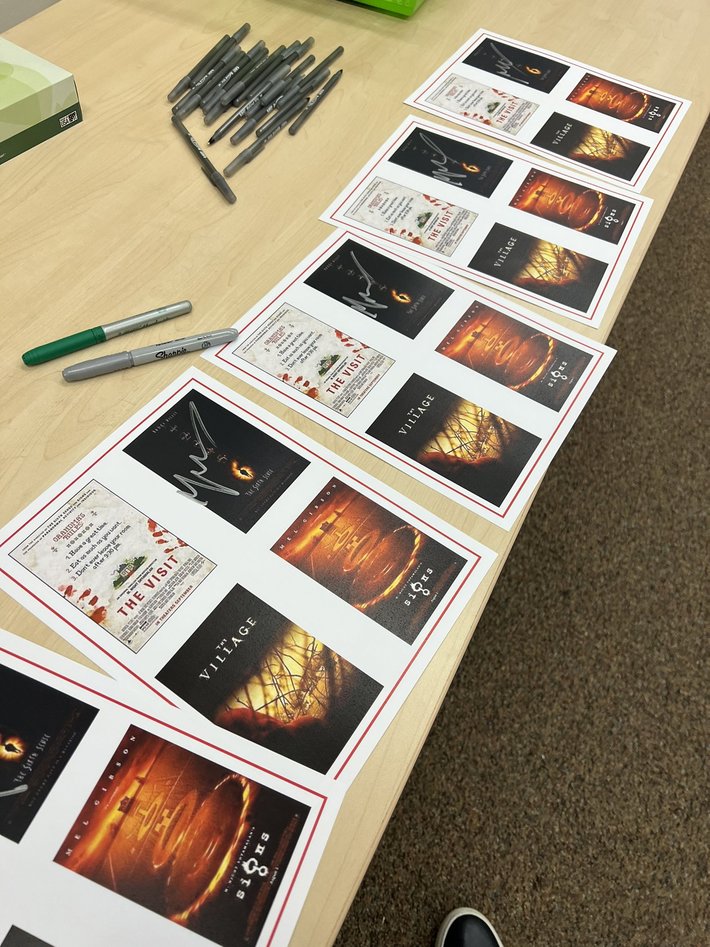 It depends on the willingness of the signer. If a film director wants to sign stuff for people, even in the context of a legal setting after their responsibilities are complete, more power to them. There are plenty of directors out there who won't even give fans the time of day.

There have been a few instances in my life where I've had the opportunity to get stuff signed but didn't take it, either due to the sensitivity of the situation or the fact that I judged the conversation with the potential signer was more interesting than the value of any potential item I could bring them.

I remember getting into a conversation with Michelle Yeoh at the opening of CBS Studios' Canadian production facility in the Greater Toronto Area, and we ended up talking about the area and her work on Star Trek: Discovery for a good 15 minutes (and I mentioned how surreal it was that I was a random fan in a theatre 20 years before watching Crouching Tiger, Hidden Dragon, and that we were now talking about the value of the Canadian film industry and how it pertained to productions like Star Trek: Discovery and others). I was happy to come away with a photo, but the conversation was the most interesting aspect.

There's no hard or fast rule -- everyone has to judge how much the experience is worth to them.

crazy, I think you're missing the point a bit. I have NO PROBLEM with a director being nice and wanting to sign autographs. What I have a problem with is -- if Johnny Depp is on trial, the bailiff coming over and asking him to sign a Pirates of the Carribean poster.

Sometimes you have to take a shot, especially if it's someone you really, really want. Like what you did with Paul McCartney. It may be the only time you get a chance and you got to go for it. It's just too tempting not to. Now, if it's going to maybe cost you your job, then that's different.

Exactly, BC. With McCartney, it was just "you will be thrown out of here if you ask him again." If it's my job, I'm not risking it. And these guys are running a court, charging someone with a crime, and...they're asking for autographs!!! Imagine if someone in the court went up to OJ Simpson during that trial.