You never forget your first...

Thank you Autograph Live for allowing me to find you and to allow me to become a member.

It has been 7 days and I already have read and examined more about different actors, actresses, athletes, musicians, historical figures and space travelers on 1 site than I have been able to do over the past 10 years.

I look back on my autograph collecting habits and they have changed numerous times over the years. Some of these have blended together, some were simultaneous and most I still do today.

I was in a Space exploration/Astronaut phase for almost 2 years. It consisted of writing to each and every astronaut in the NASA data base as well as trying to meet as many as I could get to within a 2 hour drive from Chicago.

I was in my In-Person meet & greet stage for almost 2 years where I would go to as many comedy clubs and live performances as I could and hope that the entertainer would sign after the show.

I was in my "Acquiring through purchase" phase for well over 5 years. This is the stage where I learned the most about the hobby. I fell into many of the same traps and pitfalls as many newbie autograph collectors. "Wow - A signed Jim Morrison 8 x 10 photo in silver paint pen for only $10.00 - What a steal! It must be real, It has a COA!" I would buy almost anything that was a bargain - And tossed much of it in the trash. But I learned what dealers were respected after doing some research and I made some purchases that I am very glad that I did.

However, the phase that I was in the longest, and still do from time to time, was TTM. Now most of us know that there is no guarantee that the person you are asking to sign your item is actually the person signing the item you send them. But there is nothing like coming home and opening the mailbox and finding an 10 x 12 envelope with your handwriting on it and the number one thought running through your mind.

Who is it from?

Writing to your favorite stars, musicians, and others requires one thing over everything else. PATIENCE!
But one thing is for sure......You never forget your first one.

Mine was received Mid March, 1976. I was a young collector of 11 years old and I had written to my favorite TV star at the time....Robert Blake star of my favorite show "Baretta".

I don't remember the exact date that I wrote to him or how long I waited, but when that envelope came with his logo on it - I didn't send anything to sign or a SASE, I just wrote a letter - I was beyond excited.
I opened the envelope ever so carefully and peeked inside. FYI - I still have the envelope.

"Dear Peter" - WOW! Robert Blake was writing to me is all I could think. The star of my favorite show wrote a letter to me. At the time I did not even realize that he had also starred in "The Little Rascals".
I rushed through the letter and then reached in the envelope and pulled out the pic.
Baretta and Fred the Cockatoo - Signed Robert Blake.

I was hooked since then. My collecting habits have run hot and cold over the last 40 years. It has grown into quite the site to see. I have not counted but it is nearly 500 and growing.

From index cards, baseballs & bats, photos, basketballs, scripts, bobble heads and even a water bottle, the set is growing and evolving.
But you never forget your first. 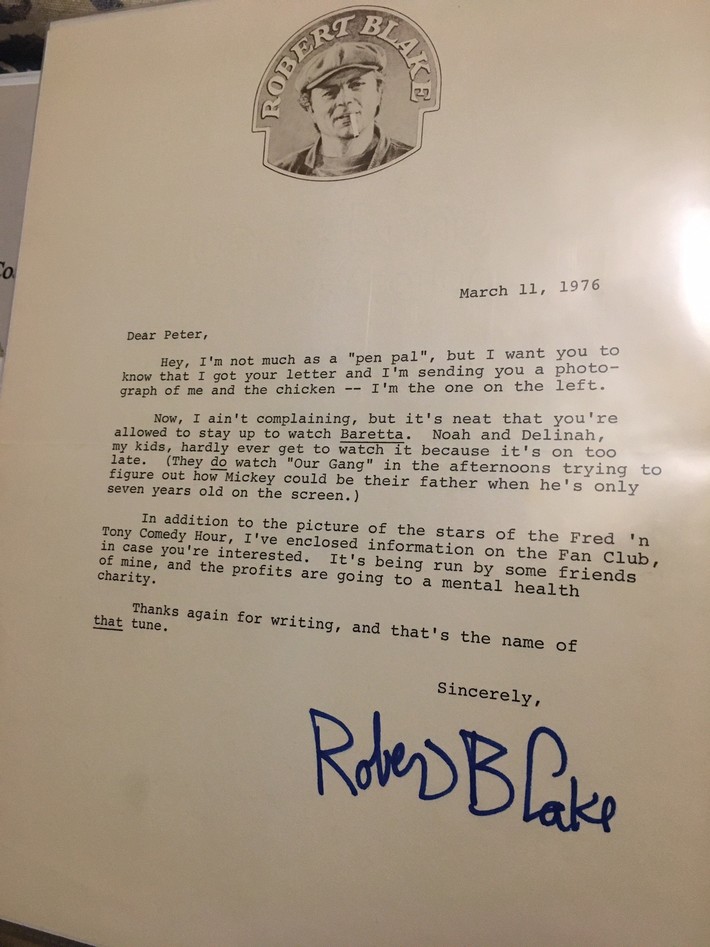 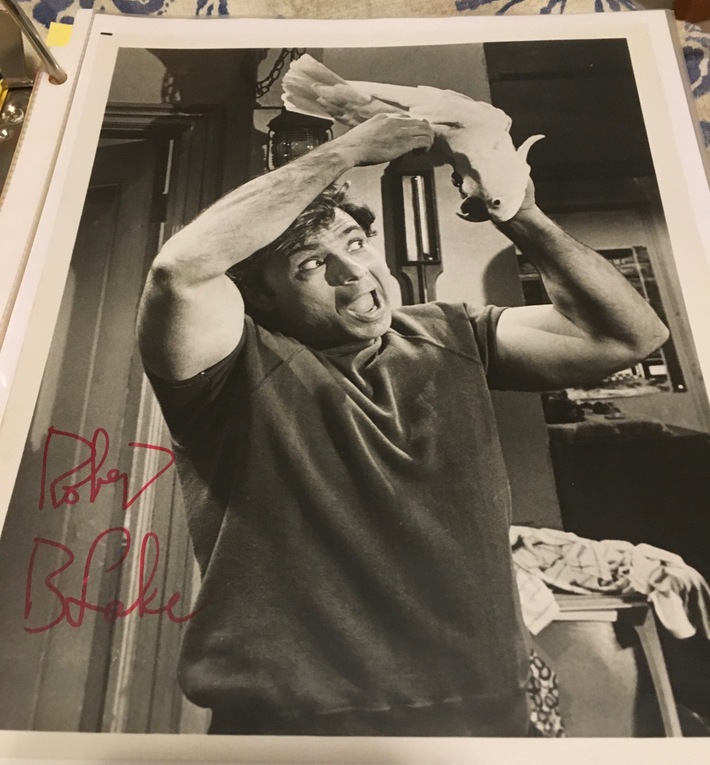 This is my first blog post and would love to hear some feedback.

Thanks for reading - Pete Hruda

A brilliant piece. Like you, new here and a great site with some amazing collections and opinions. My father collected for years and when I was 12 I wrote to the famous Ice Dancers Torvill & Dean.

Approximately a month later I cam home from school and there was an envelope and a signed photograph from them both. Sadly the photo was lost some years later but I was able to meet them both in person and get a couple of items signed and this definitely helped me catch the bug.

Like you, I was naive at the start but as time goes on educated myself and love the autograph sector and all it has to offer.

“Hello, my name is Mike Shepherd, and I am an autographaholic.”

Great stuff, Pete! Thank you, and welcome aboard!