Permalink Reply by Bradford on November 19, 2015 at 2:18pm
You should consider posting this in my group: the evolution of the celebrity signature. Well done!

Permalink Reply by Null on November 19, 2015 at 8:17pm
Thanks Bradford!!! Feel free to repost it wherever you deem beneficial! tom signed the back of this flyer in may, 1996, backstage. "sorry about the lip" is for my girlfriend at the time, who got her face cut on the barricade during the show. note "tom blink."

Davey, thanks so much for the photos/info. Those are incredible and an awesome story!

Permalink Reply by Corey Moylan on November 22, 2015 at 7:52am
Hey Ryan - I am thinking about adding a Blink piece to the collection. Wondering your thoughts on this piece I found signed by Tom and Mark...
Attachments: No photo uploads here

Permalink Reply by Null on November 22, 2015 at 8:48am
Authentic IMO, and Travis signed it too with his "short sig". That's an interesting piece as Mark changed his signature drastically right after TOYPAJ was released so this is RIGHT before he switched it up!

Thanks Ryan! What would be a fair price for a fully signed Blink album like that one?

Permalink Reply by Null on November 22, 2015 at 4:00pm
Sorta hard to say, I've seen nice full band autos go for $75-$100ish (due to people being skeptical about the autos IMO). I've also sold some full band signed Untitled posters for $175-$225. That's signed on the inside cover so it isn't ideal for display, but it's no doubt real and signed in 2001. I'd try to get it for $75-$100. The band sold signed posters on their site for $40 occasionally so it's all over the place, but full band signed albums are fairly rare!

Permalink Reply by Corey Moylan on November 22, 2015 at 4:13pm
Thanks for the info sir. I also noticed looking at past auctions that price is all over the place. I was able to grab that album for $40 so it sounds like a good deal for my first item, considering it would be a good item to display as well.

Permalink Reply by Null on November 22, 2015 at 4:22pm
Definitely a nice pickup at that price. I've gotten some sweet Travis stuff for as low as $30, just gotta have a good eye!

Neat story as part of my research on this project:

So around 2006, Tom had formed the new band "Angels & Airwaves" and their debut CD was titled "We Don't Need To Whisper". I have been looking to find a signed album of this, and have found that this particular piece is forged quite often. Around this time, Tom decided to switch his signature to a "T". The problem, is a few of the other band members had very simple signatures as well. Atom's is a fairly simple "Atom", David Kennedy's was typically "DK". Ryan Sinn's is the only one that really shows much character. Thus due to the simplicity of the sigs, I have found this album is common set of forgeries.

Here is an AUTHENTIC 2006 "We Don't Need To Whisper" signed cd obtained via pre-order promo (These seem to be the ones where Tom used "T" a lot): 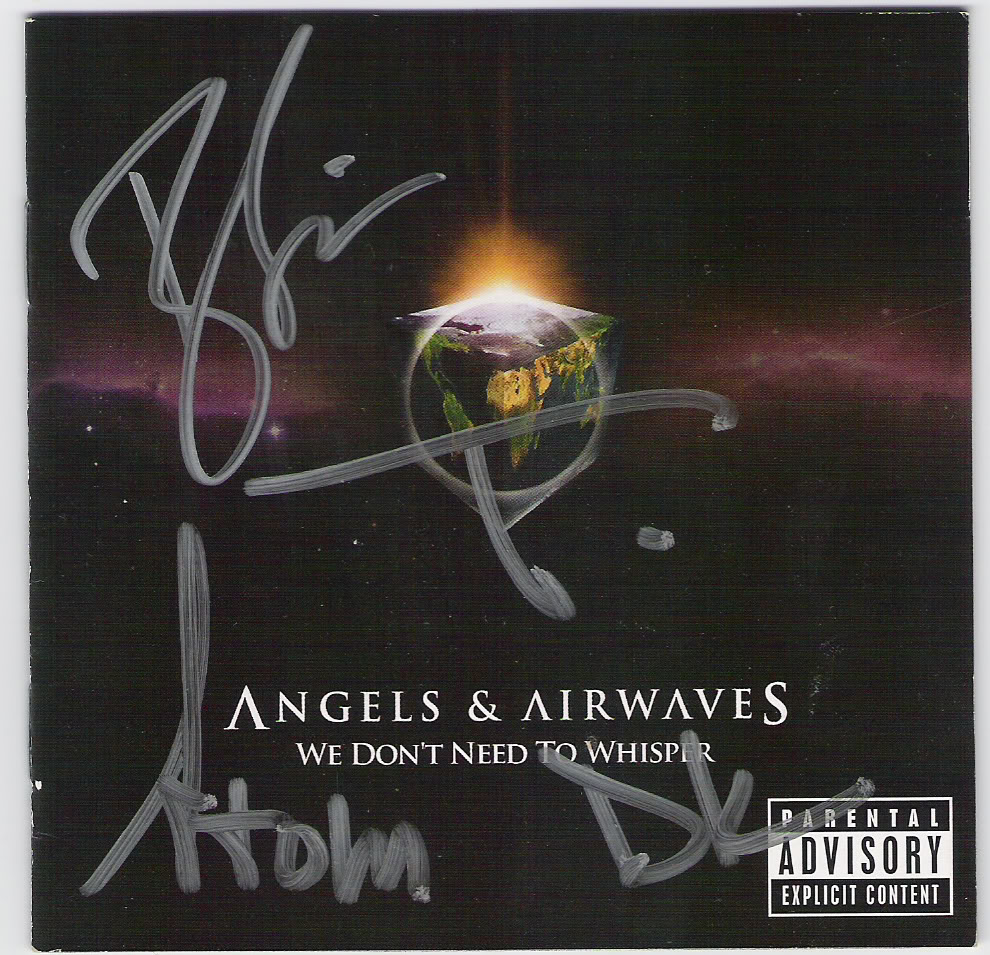 Here is an AUTHENTIC WDNTW album, signed IP at a Meet & Greet: Here are 2 FORGERIES (confirmed by 2 members in the band): Here is as bad of a forgery as you will ever see, this listed by eBay seller signaturezz