First, right before Christmas I decided to send out a drum head and 2 Cheap Trick albums to Bun E Carlos.  The albums were signed by the other 3 guys previously. I wrote a nice letter, stating that I used to be a drummer and that the albums are for my own collection. I have only done TTM a few times as I normally like to get things signed in person.  About 2 weeks later I get everything signed and returned to me.  The drum head was personalized, which I didn't mind (notice he crossed out Evans and wrote Ludwig) and the albums were both signed.  He even signed the one in silver to go along e the other 3.  To my joy, he also included 2 used signature drum sticks that he personalized and signed!  Very cool of Bun! 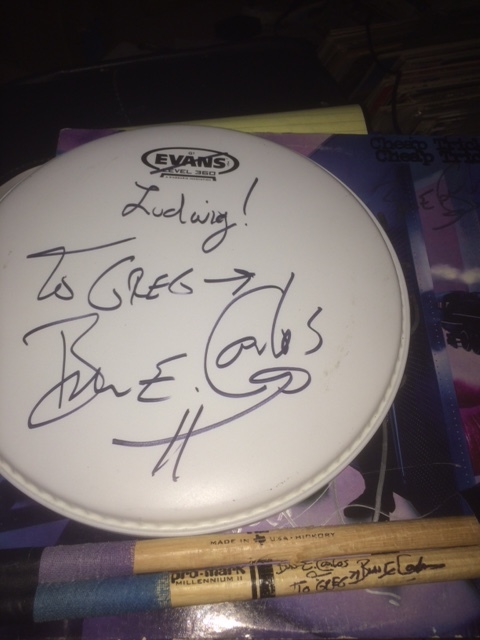 January 1st rolled around and Bush came to town for a New Year's Day gig in Cleveland.  After the show about 50 dedicated fans (mostly female) braved the cold for almost 2 hours to meet Gavin Rossdale. As he came to the crowd he said "I can't believe you guys waited this long in the cold! That's amazing."  He was mare than gracious as he signed and took pictures with everyone there. I got my 16 Stone cd cover signed. 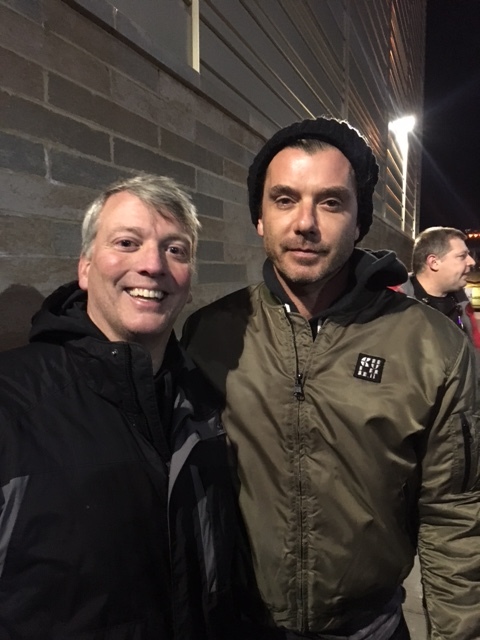 Next, Rick Springfield and Richard Marx played a co-headlining, acoustic show in Akron.  The called it the "Dick Squared Tour."  I'd never seen either one and my friend won tickets so why not?  They were both great! Very funny, entertaining and musically talented.  After the show, 3 fans were waiting for them to come out. I notice Richard Marx walking up a ramp to a car and called for him.  He totally ignores the 3 of us, got in his car and left.
A few minutes later, Rick comes walking out and we had. Totally different experience. He signed and took pictures with everyone even though his manager wanted him in the car because it was cold out, Rick made sure he took care of everyone there and I got "Working Class Dog" signed. My friend also won tickets and a meet and greet with American Idol winner Tylor Hicks.  We met before the show with a few other winners and he was very nice as he signed and took pictures with everyone.  I couldn't beat the price and he put on a pretty good show as well- he's a good harmonica player. He actually mashed up "In the Ghetto" with "Movin On Up" and it worked!

Finally and most importantly, I went to the Grammys!  My friend who wins everything, well he won an all expense paid trip to this years Grammys.  He originally asked his son to go, but 2 days before they were supposed to leave, his sons kid got sick and he couldn't go, so he asked me to go!  How could I say no? It was the trip of a lifetime.  You can't buy tickets to the Grammys as they are all given away to artists, record people and contest winners. We went to the Premier Ceremony where most of the Grammys are given out.  The thing is,
Seating is first come first served.  So my friend and I were in the front row.  Just feet away from the host Margret Cho and the presenters, musicians and award winners- few big names were in attendance. It was still pretty awesome.

Then the big awards happened so we walk from the Microsoft Theater to the Staples Center and hang out in by the main lobby to see who we could see.  We got selfies with Paul Williams and Anthony Rizzo (Cubs), shook hands with Rick Ross- no pictures, said hi to Jeff Goldbloom. The show itself was amazing and the production that goes into the show- setting up and tearing down sets in a matter of minutes is incredible.

It was a whirlwind experience and I'm lucky to have good friends!
Things look to pick up this spring as quite a few artists, including some Hall of Famers, are slated to come through town.  Hopefully I can add to the collection.

Nice. Slow winter, you went to the Grammys ha!

Ian took the words out of my mouth!!!

Nice score with Bun. He was always the meanest, and hardest to get in Cheap Trick.

What is Bun E Carlos address?