I always hate when getting an autograph costs me money. Here are examples. If I’m interviewing an actor, I’ll want to buy a movie that they wrote or directed to have them autograph, because they’ll like that a lot more than the big blockbuster they had little to do with.

When I’m going for a musician I like, I learned from the experience I had with Warren Zevon (Werewolves of London). I had his classic “Excitable Boy” album, as did another fan. He signed them, but not before laying into us and yelling about how we don’t buy any of his new records (I’d later see him make groupies cry backstage because he felt they were dingy and didn’t know anything about Greek mythology. Yikes!).

I’ve told the story about being a teenager and making the two hour drive to Los Angeles to meet my favorite player – Magic Johnson. He would only sign the new book (which was written for little kids learning basketball). I bought the book, waited in line with 5,000 fans, only to have my car ticketed and towed (didn’t realize during rush hour in Los Angeles, certain streets have the parking spaces open up to create another lane).

That was about a $200 autograph experience, on a book I hated.

So when October 6th rolled around, my birthday, I was spending that weekend in Los Angeles with the ol’ lady.

I hadn’t planned on doing any autographs that weekend. But when I paid a visit to Book Soup on the Sunset Strip, I always glance for autographed books from authors that have been in. For those music fans, I suggest you get in there or order the Graham Nash book (The Hollies, Crosby, Stills, and Nash). They have signed copies, and they sell for the same price as the book. I’m sure if you pay for postage, they’ll ship it out. It contains lots of his great rock ‘n roll photos from over the years.

I discovered a bookstore right next door called Mystery Pier Books. Most might know them from the shirt Johnny Depp wears that has their name on it. He’s a client, as are other celebrities like Paul McCartney.

They have signed movie scripts, and many signed 1st editions. I was drooling over a Joseph Heller signed copy of Catch-22. And it was hysterical to find out, as I brought up the documentary Salinger, that the owner was featured in it (I see so many movies, it’s hard to remember those things).

If you collect rare books or signed classics – from a Harper Lee signed “To Kill a Mockingbird,” or anything else you can imagine. I say you get in there and check out there stuff. 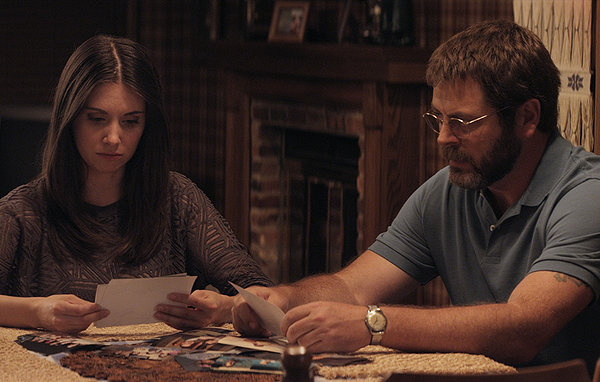 Anyway…I saw a list of upcoming book signings at Book Soup, and that very night on October 5th, actor Nick Offerman was going to be at a theatre nearby doing a signing and book reading. After a quick stop at a record store, we headed over to the New Beverly Cinema.

We saw a parking spot right out front, but I looked at the signs. It was only one hour parking until 8 p.m., and he was supposed to be there for a few hours. I figured we’d put money in the meter and come out in an hour and move the car. I wasn’t about to have another Magic Johnson incident.

I was a bit bummed that the $32 entrance both my girlfriend and I had to pay, even though we were only buying one copy of the book. Luckily, I hemmed and hawed a bit, and the cashier said “Well, you already missed 15 minutes of the show. I’ll let you guys in for one ticket.”

Nick Offerman is great on the show Parks & Recreation, and I’ve loved him in the indie movies he keeps popping up in (the last one was The Kings of Summer, which I recommend). After he pulled out an acoustic guitar and did the song that inspired the name of the book (Paddle Your Own Canoe), he took questions from the crowd.

Somebody asked his favorite drink. He responded, “Corn liquor.” He also talked a lot about his favorite Scotch.

One member of the Groundlings asked if he still does improv shows. He said he does them at UCB, New York, and L.A.

Someone asked who would win in a fight between Aziz Asaria and Amy Poehler. He said, “Hmmm…I’m trying to think of anybody Aziz could beat in a fight. I don’t know if I could beat up Amy, though. She’s a tough mother f***er!”

I raised my hand and asked him about a skit he does on Conan O’Brien. In all my years of watching late night TV, it’s the funniest thing I’ve ever seen. Here’s how the bit goes.

In real life, Offerman is a woodworker. He has his own workshop and makes furniture and all sorts of things. Conan goes to that shop, and the skit is called “Nick Offerman reads Tweets from Young Female Celebrities.”

He’ll be sticking a piece of wood into the circular saw, stop, take his goggles off, and read a tweet from Lyndsay Lohan or Paris Hilton. He does it in a completely straight face, with that deep voice, the facial hair, and eyes…like the most serious man on the planet. After reading something along the lines of, “I drank so much Vodka at the club, I can’t even find my panties”…he’ll slip the goggles back on, and continue sawing.

He’ll read about seven of them, and it’s hysterical.

He thanked me for complimenting him on it and said “I can take zero credit for that. That’s a writer who has been with Conan from the very first show. He came up with that idea [I forgot his name]. I was once in an airport in another country, and the guy was looking at my passport, looking at me, looking at my passport. He finally said, ‘I know you. You’re that Twitter guy.’ I said ‘No, that’s not me.’ He kept insisting it was, and it wasn’t until he said, ‘From Conan show,’ that I realized what he meant.”

Everyone got their questions in. I was surprised it was a crowd of around 75, and not hundreds more.

Since we got there late, we were the last in line for autographs. This gave me plenty of time to go move my car. I walked out, noticed a lot of parking tickets on other vehicles, and an officer standing behind my car writing the license plate down. I had no clue why. As I got into my car, he knocked on the window. He said he was giving me a citation and I said, “Why? I still have 15 minutes left on the meter!”

He explained, “It’s not because of the time in the meter. You’re fine there, but your car is sticking a little bit into the red zone. When you park in metered areas, you still have to keep your car perfectly within its space.”

As I angrily walked back in, I noticed the signs that said he wasn’t going to sign any memorabilia or anything other than the books. It also said he wouldn’t take photos.

When we finally made it to the front of the line I said, “Tomorrow is my birthday. I’m up here from San Diego, and a friend of mine is interviewing Elliot Gould right now [true story]. He invited me to that, but I came to this instead. I just got a parking ticket outside. No, I’m not going to ask you to pay half of it or anything [he laughed at that]. It’s all my fault; but the least you can do, is take a picture with me.”

He looked back at the last seven people in line and said, “I really can’t do that. It wouldn’t be fair to everyone else in line.”

Then he said, “Okay, come on! Let’s take this picture.” 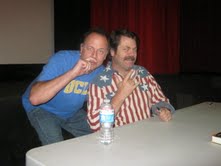 I ran over to the other side of the table, made a fake mustache with my finger, and my girlfriend snapped the picture.

After leaving the theatre I thought a second time about it all. It was easily worth $90. This will be a fun story for you once the sting of the stupid ticket wears off.

Man thats an awesome Story and I just thought of the scene from Meet the Millers when he goes for Jason Sudekis ear hole!! Glad he did not do that to you!!

Hey Tony -- I agree, that was easily the best scene in the movie. I'm guessing Sudekis cracked up a bunch of times, and they had to do multiple takes.

When I approached him at the table, I was going to ask if he did that to his wife next time they were in bed, because you know this couple has an insane sense of humor, and he would just to mess with her. I also wanted to ask him about the weirdest autograph request he had, but I got so wrapped up in my photo request, I just plum forgot!

Josh nice story but i am not jealous of the 90.00 dollars price tag!

Ironically Josh after my wife and I seen that film Ive done that to her and now If i am falling a sleep she messes with me and does that back!!