I thought it would be fun to talk about lawsuits involving autographs, because of something I heard on the radio.

Now, this isn’t the type of lawsuits you’d think regarding the autograph industry. It’s not about suing a company that deals in forgeries. This was a weirder case, and it got me thinking of what other types of lawsuits there have been in the industry.

On a show called Handel on the Law, airing on KFI 640 AM in Los Angeles, a lawyer answers various questions from callers.  I usually listen to this show while I’m driving, so I’m not always paying attention to everything the caller is saying. Especially when a lot of the calls are similar; a neighbor being sued for building a fence over the property line, a landlord suing a tenant, a brother suing his sister for not giving him the proper portion of the mother’s will, etc. Yet I found this one call regarding autographs bizarre, and unfortunately, I didn’t hear the beginning of it.

The guy said that he lost a lawsuit for $25,000 and had only paid half of that. They were talking about the legal ramifications of not paying a lawsuit you lost and what collection agencies can do to you. Now, what he claimed to have lost the lawsuit on was bizarre. He had a website that showed an autographed picture of a celebrity. That celebrity sued, because the site wasn’t authorized to use his photo or likeness for their business. They sent him a letter first, and when it wasn’t taken down he was sued, and lost. Here’s what I can’t figure out about that, though. Don’t most places that sell autographs do that? And, unless the business was showing a photo of somebody -- let’s say Sylvester Stallone with boxing gloves as Rocky -- and they’re putting a caption under it that says, “You better come down to Dave’s Diner, or I’ll sock you in the face”...and it comes off as an advertisement or endorsement from Stallone, it seems like it should fly. Here’s an interesting, “almost” lawsuit, told to me when I was interviewing Rolling Stone bassist Bill Wyman years ago. The interview was a lot of fun, and when I talk to celebs, I make sure my last few questions are about autographs. That way, I can share with you some of the insights from them about what it’s all like.

The story he told me was fascinating, and one of the many reasons you should stay away from eBay autograph purchases. He had done a show in Germany (I can’t recall if it was a solo thing or with the Stones). Someone came up to him and asked him to sign a bass guitar. He said that he doesn’t usually like to sign instruments, but the guy kept talking about how much of a fan he was, and pleading with him. So he agreed to sign the guitar. A few days later, he saw the guitar on eBay. That ticked him off, but what made him angrier is that the seller claimed it was a guitar Wyman owned and played on a few Rolling Stones tours. What happened next blew me away. He said he contacted eBay and told them that exact story, telling them it wasn’t a guitar he ever owned or played, he merely autographed it. They did nothing about it, and the guitar sold for a lot of money. And with that Wyman went back to his rule of not signing guitars for people. 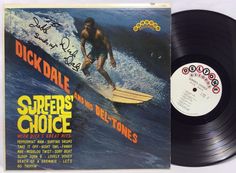 When I talked to surf-guitar legend Dick Dale about autographs, it first started with me asking him to sign an album which he was ticked about. It was apparently a bootleg. He eventually signed it after the hour long interview, because things were going well with our conversation. But, he told me about how people often sell guitars they claim he owned, or guitar strings that they said came off one of his guitars at a show. I think he told me he tried contacting eBay, but didn’t get anywhere with them so now he just ignores it.

All that got me to thinking -- what weird lawsuits have you guys heard about regarding autographs. I’d like to hear anything you’ve heard or been a part of, and again...not the usual suing of a company that dealt with forgeries. I’m talking about that athlete that was paid $10,000 to sign at an autograph show and didn’t show up, or refused to sign things. Stories like that.

So, what do you guys got?

Nothing to add except to say I thoroughly enjoy reading your blog posts and to please keep them coming.

Thanks for the kind words, Mr. Blair.

Well of course there was the time I bought a signed Beatles album, Turns out it was fake.  The end result? Frank Caiazzo was sue (he won), American Royal Arts went out of business,  Morales was uncovered, and  Cyrkin provided dramatic courtroom evidence leading to all the network TV SHOWS to cover the case.

I will than you in advance fro my contribution to the community by buying a fake beatles album.

Then there was  the time I consigned some Michael Jackson handwritten stuff to an auction house. Before the auction I ended up in the hospital for months with a head injury. The items did not sell at auction. I get to a nursing home, my mail was forwarded, and there was a check from auction house. They said I had ok'd a private sale after the auction.  But that wasn't true as I was in hospital and communication was monitored by nurses.

I sued and won. As it turned out, the private collector  they sold my stuff to was themselves!

That's the link about sling and the fake Beatles lp.