First, is Bruce Springsteen. I did a blog where I complained about a member here not helping me get his signature when my fiancee and I went to see him in L.A. (he got the Boss, I didn’t; I was on the wrong side of the sports arena when he came in and signed for fans). I liked to think autograph collectors would help each other out. Anyway...I may not have made the girlfriend happy because I didn’t secure the autograph, I have a chance to make up for it this Christmas. You see, the ‘57 Chevy Bel Air Springsteen once own is on eBay right now for $200,000. Now, a story says it was once valued at $800,000, but I’m not sure why. 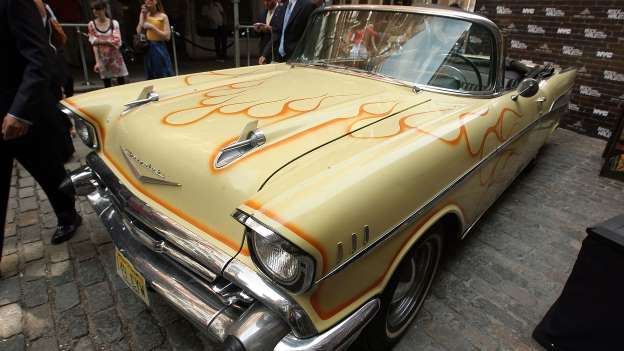 Springsteen bought the car for a couple thousand dollars, but it was before his “Born to Run” album came out. Afterwards, he was a big star. They say he felt the yellow top was to conspicuous. The car comes with a copy of Springsteens original registration. So, I guess that’s kind of cool. It would be cooler if it was a car pictured on an album cover or sleeve. Heck, I’d gladly settle for that Corvette that’s on the cover of his book “Born to Run.”

Now another, more frustrating topic, that has been covered. The eBay autograph sellers and autograph dealers, that make it hard for the collectors to get anything done.

Former Saturday Night Live and Joe Dirt star David Spade was on Jimmy Kimmel last night. Kimmel mentioned all the autograph seekers that surround Spade. He said, “How do they know where you’re gonna be? Or do they just walk around carrying pictures of you everywhere?” Spade shed some light on it for Jimmy. He said, “They pay off people to get that information. I don’t know how much of a tip you give a guy who tells you where I’m going to be. A nickel? An autographed photo of me can’t go for more than a dollar.”

He then went on about how annoying they are by trying to convince him they’re fans and not autograph dealers. He said, “They try to move their hands around, handing you different pictures, from different angles, like you don’t notice it’s the same person in the bunch. One guy even said, ‘Come on man, I’m your number one fan! They should make a ‘Joe Dirt 2’.’ I then told him they did make a Joe Dirt 2 and he said ‘Oh.’ He obviously wasn’t my number one fan, but...even if he was my 100th fan, he’d probably still know that fact.”

Kimmel was laughing hysterically at these stories from autograph dealers. Spade said, “The worst are the ones that pimp out their kids. They’ll be some little girl handing me a picture to sign, and she’s telling me she’s my biggest fan. I look down to sign the picture, and see it’s a Happy Gilmore photo, and the dad is yelling at her ‘Not that guy, not that guy! The other guy, over there!’ Because the photo was meant for Sandler to sign.”

Seriously, I wish when stars saw and noticed these types of things, they would just say “One autograph a person. That’s all I have time to do.” And if they think the person is a dealer, they can make the signature sloppy. I’ve also suggested to some of them, during interviews I’ve done, that they just personalize all autographs. Spade had some situations with that, too. He told Kimmel, “I’ll say to them ‘Who do you want me to make this out to?’ they’ll always say ‘No, man, don’t worry about that. It’s not about me, man...it’s all about you. Just sign it with your name’.”

So for any of waiting to get an autograph from a celebrity, and you are NOT a dealer, and you see a dealer near you with 20 8x10’s...say what I’ve said to them before. Nicely explain, “You know, when they see all those, they’ll think we’re all just going to sell our stuff. And that makes them not want to sign. So, why don’t you let us get our stuff signed first, then you can take out your box of 25 headshots, and get them signed.”

I’m especially strict of people with guitars, because the musicians hate that, and it usually turns them off to any kinds of signings.

Comment by Adam Halloran on December 18, 2016 at 5:05pm
I probably couldn't like this post more, most of the dealers could care less about the person signing the autograph! It is all about the resale value and they seem to even have contempt for the actual fans because they get in the way.

They keep blanks or cheap photos and Chinese pick guards to have signed. Nothing the artists actually got paid for, and they feel that they are owed the signature!

However I feel most artists or actors could devalue their own autograph by making it available on their own website at a lower cost to their fans. The stars like the chase to a degree as well as the paparazzi shots because it makes them stay in the spotlight.

It is all a game and sadly the fans get punished.

I agree with Adam. A lot of those ip dealers fight amongst themselves ,there was a time i purchased an autograph because the dealer organised a signing with the artist a month later another dealer organised a signing with the same artist and were selling the autographs cheaper, anyway they would have killed each other if they were in front of one another.

I tend to like guys who are collectors and appreciate obtaining an artist autograph.

I couldn't agree more with you on the dealers/ebayer's.   In the last few years of meeting musicians after shows, I've pretty much seen it all.  Guys with 5 pick guards taped to cardboard, people changing their appearance to get more than 1 after being told 1 per, guys with 20 plus albums or cd covers wanting all of them signed, people shoving people out of the way to "get theirs."  The thing is, they don't care if they hold up the line, even if you ask them to wait until the end.  It's "I was here 1st, so screw you.  I'll get my 20 and if you get anything, be happy."

The worst, in my opinion is using kids to get an autograph.  I've seen parents with their half-asleep kids, waiting to get an autograph.  Clearly the kid wants to be home and in bed.  Then the parent wakes them up, yelling at them to "grab that picture or album!"  I really think it's a form of child abuse.

However, I do disagree on the guitars.  Now, I only have 2 guitars that I have had signed. One that is about done that has some of my favorite guitarists on it: Slash, Dick Dale, Brad Whitford, Zakk Wylde, Rik Emmett, Steve Vai and Steve Lukather.  The other I'm going to put blues guitarists on it.  Currently I have John Mayall and Eric Johnson.

When Lukather saw the guitar, he looked to see who was on it.  He said "Man, you really want me to sign this?"  I said, "My favorite guitarists are on there."  He said "I'd be honored to sign it!"  I thought that was pretty cool.

To me, I would rather have the artist sign the guitar and see what they are signing, than to have them sign a pick guard that can be put on any cheap guitar.