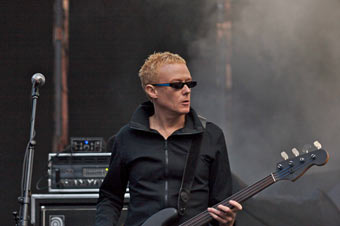 Two autograph things in the media recently that I thought I’d share. In the Union-Tribune in San Diego, they did an interview with Goth, alt-rocker David J (from the bands Bauhaus and Love & Rockets). His real name is David John Haskins, but he goes by his stage name. And he’s always good about signing autographs in town (he lives in the North County). Perhaps he’s so nice because he does the whole Kickstarter campaigns to fund records (at least he’s done his second record that way).

When the U-T reporter told him the song “You Suit a Rainy Day” reminded him of a Ray Davies song, David J was thrilled. He replied, “Thank you very much – one of my all-time favorites.”

He then shared a story that fans always like hearing from their musical idols.

“The first concert I went to was The Kinks in London. I stood out in the rain afterward to get Ray Davies’ autograph.” 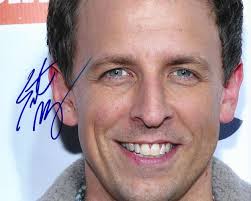 Then tonight I was watching Seth Myers (former Saturday Night Live news anchor and head writer). He does the late night show that Jimmy Fallon used to do before he jumped over to The Tonight Show.

He told one of those stories autograph collectors hate to hear. It’s about the people that get autographs to sell.

Myers said that when he leaves the building there are often guys waiting for autographs. He said, “Usually they’re waiting for somebody like Justin Beiber, not usually me. Sometimes they ask me to sign an autograph. I can usually tell which ones are the fans of mine and which ones want to get my autograph just to sell it. I realized this guy yesterday wasn’t a fan when he said, ‘I really, really love your show.’ I said, ‘Hey, thanks man. What’s your favorite part of the show?’ He then said ‘I really, really like when you interview people.’”

Myers laughed and continued telling us the story by saying, “I’d like to take credit for that, but…instead he just asked me if I’d sign another autograph. I was on to him, and he thought he’d show me he really is a fan, so he asked ‘How do you like working for NBC so far?’”

Myers reminded us he’s been with them for 17 years (since SNL was filmed there). Myers slyly smiled as he finished the story by saying, “So…I know he just wants to sell my autograph, but the joke is on him because…nobody wants to buy my autograph!”

These stories kill me. I guess it happens..autograph dealers stocking up. Peter Wolf (a very fan friendly guy) asked me which of his solo albums was my favorite...I’ve been attending Geils concerts since the early 70s, so I am a fan...but I was taken by surprise and drew a complete blank.
If I am going to drive many many miles and stand out in the heat and cold holding my album and a sharpie hoping you’ll sign..then I’m a fan. Why would I sell it on eBay? After eBay cut, my gas, my time...I already lost money. We come because we’re fans. If it is such a big deal, charge us $5 for an autograph with a 1 item limit. I’d consider that to be fair.

Hey Crabby, when I met David Byrne, I had 2 Talking Heads albums (I try to never bring more than two, or you look like an autograph dealer to them). He was super nice, and even brought out his own pen (after he said "let me go inside first and get settled"). He then asked why I didn't have any of his solo albums? The only thing I could think to say (because I remembered the illustration on one of his records having a lot on it), "Those are two crowded with things on them, and the signature wouldn't show up." He said "Huh?" and looked at me strange.

Now, when my friend got Taj Mahal, Taj said walking in "i'm not signing" and after the soundcheck when he walked out he said "if you show me a ticket for the show tonight" which my friend did. He then got his 6 albums and guitar signed! He was a very happy camper.