CinemaCon is a big movie convention in Las Vegas that’s attended by many movie theatre owners and people in the business. Unlike ComicCon, it’s not something the casual fan would want to attend (not to mention the tickets being a 10 times the price of ComicCon). They have trade shows that show off various products that theatre owners might be interested in buying. My favorite part are the various candies and ice cream companies there to promote items. You get lots to sample and I probably gained 10 pounds during my week there.

I don’t bug the celebrities that are there for autographs. Usually they’re on stage speaking to a large crowd, but the press is often given opportunities to interview them. I’ve always found it unprofessional to ask for an autograph in that capacity.

That doesn’t mean I left that week without any signatures. Here’s how a few of them happened.

My wife kept needling me, saying she was sure I’d ask Jordan Peele for his signature. I was a huge fan of his sketch comedy show “Key and Peele” and loved his movie “Keanu”. The movie he did this year -- Get Out -- was interesting. He’s one of the few stars that didn’t make it out to Las Vegas, because there was a dust storm and strong winds, and that grounded a lot of flights.

At one of the luncheons, director Sofia Coppola came out with stars Kirsten Dunst and Colin Farrell to talk about “Beguiled.” It was an interesting conversation. Farrell is always a lot of fun in interviews.

A few other stars came out to talk about their movies. Charlize Theron looked beautiful in her dress, as she talked about her film “Atomic Blonde”. Yet I had a friend in Vegas I wanted to hook up with, so my wife and I left while she was talking (that’s not as rude as it sounds, as there were hundreds in the ballroom at various tables).

Just as we opened the door to walk down the hallway, my wife nudged me. She said, “That’s Gary Oldman.” I wouldn’t have believed her, except that he had been on stage earlier talking about playing Winston Churchill in “Darkest Hour.” He told some interesting stories (including the fact that it took 2 ½ hours in the makeup chair each day).

He was standing there talking to two people, and I didn’t want to interrupt. I also didn’t know to say. I wanted to tell him I loved his performance in “The Dark Knight.” I wanted to say how intense he is in roles, including the first thing I saw him in -- playing Sid Vicious in “Sid and Nancy.” I was even tempted to tell him I was bored to tears in “Tinker Tailor Soldier Spy,” despite his performance in it being interesting.

After they were done talking, they started walking down the hall. Since we were going in the same direction, we walked with them. As they stopped to talk pictures next to his movie poster, I broke my rule. I asked for his autograph. I just couldn’t resist. He’s one of the best actors around. He said, “Sure.”

As he grabbed the notepad I had, he asked, “Is it made out to anybody?”

I told him “Josh” and he signed it. I thanked him and we were on our way. The next day at a lunch, Charlie Hunnam (Sons of Anarchy) came out to talk about “The Lost City of Z.” He had a few amazing stories, including a time on the set where he insisted on filming a scene during the rain, and lightning hit the ground 10 feet from him, knocking him to the ground. Another involved a beetle that had burrowed into his ear while he slept. Later, in a different hallway, I saw a few people pestering him for photos and autographs. He was very nice about it. So was John Cena, the wrestling star who has made a nice transition to the big screen. I told him how funny his scene was in “Sisters”, when Tina Fey was flirting with him. He thanked me. I was surprised I was as tall as him. It made me wonder how I’d do in the wrestling ring against him.

Comedian and actor Kumail Nanjiani was wandering around. One guy asked him for a photo, and as they stood there, he was looking for somebody to hold the camera. When nobody could be found, Kumail said, “Just do a selfie.”

I told him about how funny his massage scene was in “Mike and Dave Need Wedding Dates”, and we talked a little about his upcoming Judd Apatow movie called “The Big Sick.” I asked why he was playing himself in the movie about his real life courtship with his wife, but Zoe Kazan was playing his wife instead of his real life. He replied, “Because she’s not an actor, she’s a writer.”

He made the crowd laugh when he said, “We say ‘f**k’ a lot in the movie. Judd Apatow has a quota to fill.”

He was funny and couldn’t have been nicer to the five of us talking with him. I saw Salma Hayek at a few events. She was beautiful as always, and surprisingly funny. Again, I didn’t want to bug her for a photo or autograph. Even though all the stars were great with the people that approached them, those are movie theatre owners and they’re schmoozing. I got a press pass. They don’t need to be bothered by me. Let the movie theatre staff that doesn’t usually get to meet these folks do all that.

Director Chris Nolan was promoting his new war movie “Dunkirk”, which is already getting Oscar buzz.

At the awards ceremony on closing night, Amy Schumer came out to give the Icon Award to Goldie Hawn. They were both hysterical and a bit risque.

In one weird thing that happened, an usher sat us in the third row. Press usually sit farther back, but we were digging it. Then John Cena, who was given the “Action Star of the Year” award, sat right in front of us. After about 15 minutes, I truly realized how annoying it must be to be famous. At least 20 people came up to talk to him. Most wanted selfies. A few wanted autographs. One woman saying, “It’s for my daughter. She’d kill me if I didn’t get your autograph for her.”

He was always gracious, often standing up to meet the people that approached. My wife leaned into him at one point and said, “I’m in the background of all these photos. I think I’m in more photos than at my own wedding.”

He laughed and they talked for a few minutes. Again, I didn’t want to bug him for an autograph, but I did insist my wife take a picture of his head. It was huge. I’m guessing if he ever head-butted anybody, they’d die instantly.

The ushers eventually told us we were in the wrong seat, and as we were leaving, we saw Salma Hayek sit down across from us.

Nickelodeon star Isabela Moner got a “newcomer of the year” award. She was surprisingly hip and gracious. 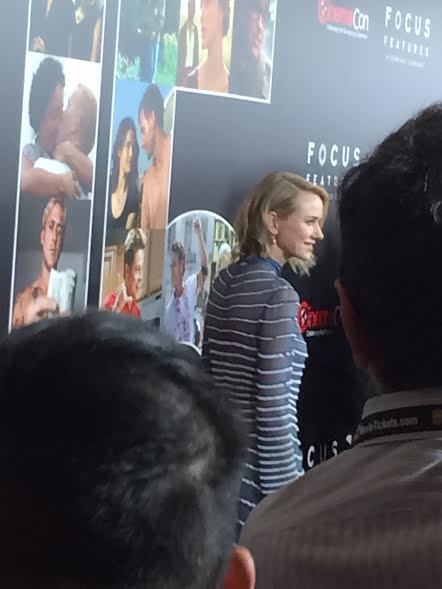 Naomi Watts received an award, and like a few of the other stars, talked about the importance of movie theatres.

Jessica Chastain said she was raised by a single mom, and they couldn’t afford to go to the movies often, but she cherishes the memory of seeing “Goonies” in the mid-80s. As she spoke, I thought...if I see her at the after party, I’ll probably ask for her autograph. She’s an Oscar winner, and I really love her work (I suggest you seek out “The Debt”; brilliant movie).

Ansel Elgort (The Fault in Our Stars) got an award. I figured he was probably bugged at his seat, with women getting his autograph for their daughters. I haven’t met a teenage girl that didn’t fall in love with him after some of the roles he’s had the last few years.

Even though Gary Oldman was the only person I asked for an autograph, it doesn’t mean I left CinemaCon without signatures. I got a lot, but you know how? I purchased them. After walking around that place in Caesar’s Palace that we all think sells bogus stuff, it was refreshing to see that there were some real autographs.

“Give Smart” in conjunction with Variety Children’s Charity, gets autographed movie posters and stills directly from the movie studios. I bidded on almost everything, but the bidding quickly got up there. As my wife said...I’m bidding against movie theatre owners that have more money than I do, and they want a signed poster of “Fences” they can put in the lobby of their theatre.

I did end up with the winning bids for autographed photos of Sam Rockwell from “Galaxy Quest,”Dijmon Hounsou from “Amistad”, Kate Capeshaw; Joaquin Phoenix and C. Nielson from “Gladiator”; one from director Neil Jordan, and my favorite piece -- a movie poster of Chris Rock’s “Top Five” signed by more than five of the cast members, including Rosario Dawson, Cedric the Entertainer, Gabrielle Union, and J.B. Smoove.

Nothing like coming away with cool signatures, and not having to bug the actors to get them -- but donate to a good cause.