Did You Purchase an Item from Anthony Nurse or Charity Fundraising Packages? Please Let me Know... I saw items at an auction recently that I believe to be forgeries. I'm in the process of trying to figure out if they are real or not, and would like to hear from others on experiences they've had with Anthony Nurse or his company -- Charity Fundraising Packages.

I remember being at a party 15 years ago, and somebody had a signed "Hotel California" album by the Eagles. It was fake, and I knew it was. I asked the guy how he acquired it. He told me an auction for his sons school. I didn't have the heart to tell him.

So, when I saw another fake Hotel California album at this auction, it made me cringe.

Anyway...please contact me if you purchased a forgery or ANYTHING from this company -- and I'll see if Steve and Roger can help me authenticate these items, and we'll move into the next steps involved (if, in fact, they are forged items).

It's bad enough if forged items are sold to unsuspecting people, but to do it in the name of a charity is just despicable.

(and a website that shows generic pictures of bands signing for 50 fans doesn't prove anything...neither does a photo of Anthony Nurse standing by Rod Stewart at a book signing).

At book signings, they don't let you bring albums, cds, or guitars. They sign THE BOOK ONLY. And having a photo taking with somebody, doesn't make any autographed item you sell "authentic." Most people don't realize that.

Anyway....contact me at: [email protected]

Comment by Innuendo on July 29, 2013 at 7:47pm
Per your private message, I don't have pictures of the sig my boy bought. He had just turned 17 at the time and his mom and I noticed a massive amount of money missing from his bank account. He came clean and said he bought a sig without running it by me or my wife. Well real or not, as a punishment (he was told to save that summer and no purchases over $100) we were going to have him return the item. Seems he had bought a "Michael Jackson" sig. My older son collects Michael and knew the moment he saw the sig that it was a bad forgery. He even showed us an autograph of michael's that was printed on an official poster sold and produced by MJJ productions, and it looked literally nothing at all like the poster sig. We were beyond angry, and demanded he get his money back and return it. I left it up to him to get his money and handle it. He never got a response, and I didn't either. Though after talking to my wife, we agreed that he deserves to lose the money and learn the lesson. He worked it off by working with me that summer. I was brushed off with voicemails and emails that got no responses for months. Eventually I forgot about it, and my son has since joined the military, so getting any info from him about it would take some time. Though the name did ring a bell. They've been selling crap for a while now. I'll try to get a hold of Eric my son and see if he has any more info on it. My wife tells me he did get contact with them at some point, but I don't know the full story.

I just talked to somebody (from the other thread) that has a piece signed by various Presidents. Both Steve Cyrkin and I feel it's a horrible fake. The purchaser has already tried getting their money back, and hasn't heard anything from the company. We're going to be on this. If anybody knows anybody, that bought anything from an auction or anything...let's get crackin' on this.

Comment by Innuendo on July 29, 2013 at 10:36pm
Easiest thing to do to get their attention is call (if there is still a number available) posing as somebody who wants to buy a piece. They'll always return a call if they think they'll make money off it (MJ McCartney all the big name celebs). Once you've got them on the phone, get any info available and then let them have it for selling crap. My kid son made the mistake of calling and leaving a message demanding his cash back. Of course they weren't eager to return his calls.

Google Anthony Nurse and he has a step by step on how to tell forgeries and fakes, the old saying takes one to know one.

Take a look at these photos. These are all items Anthony Nurse has photos of on one of his websites (which means, they're probably real). Just curious as to what people think of these -- Bruce Springsteen and E Street Band, Rolling Stones guitar, Paul McCartney photo, and a "rock legends guitar" which went for $100,000 to charity. 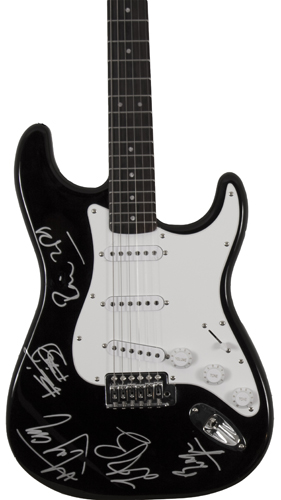 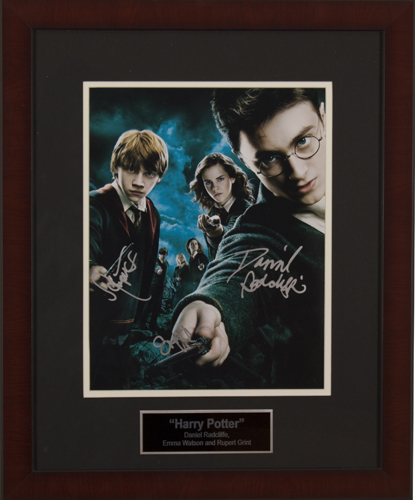 I think they were all signed by the same person.

Anthony Nurse used to run a company called By the Bay Marketing from memory but shut down as the heat was on. He then set up www.autographstore.com and runs this with Michael Tobin.

No item they sell is real, they simply forge signature after signature but then to try to claim to be authentic they give a date when it was signed. Usually the date will tally to a film premiere etc and to the amateur appears genuine.

A friend of mine tried to get money back. They purchased several Whitney Houston items prior to her death and then went to sell them after she died. Several went through, however, JSA rejected two he sold to someone. When he went back to Autograph Store they refused a refund stating the usual junk about not trusting 3rd party authenticators