It’s strange that after coming out of a week where my stepdad had a triple-bypass, and my mom had a heart attack, I then have a weekend where I find out about a singer/songwriter dying of a heart attack in the same hospital my stepdad was in.

J.J. Cale didn’t live far from me, over in Valley Center, California. It’s not far from Escondido, where he and Eric Clapton recorded an album called “Road to Escondido” (it won a Grammy in 2006).

I saw him in concert a few times, although I wasn’t at the Sports Arena show Eric Clapton had where Cale came out on stage in 2007.

Cale was 74, and if you don’t know him by the name, perhaps you know the songs he’s done that have been covered by Clapton, Santana, Lynyrd Skynyrd, The Allman Brothers, Waylon Jennings, Bryan Ferry, Freddy King, Widespread Panic, Poco, and Johnny Cash.

Neil Young praised Cale in his autobiography, saying he had a profound inspiration on his songwriting (citing his love of the song “Crazy Mama”).

I’m sure everyone knows his songs After Midnight, Cocaine (covered by Clapton), and Call Me the Breeze (Lynyrd Skynyrd).

Cale talked about living near Escondido, and how since he’s press-shy and likes his privacy. He enjoyed nobody recognizing him. Yet when Clapton would come to town, they’d go eat at Denny’s, and everyone would be asking for autographs. Cale said, “I go to Escondido almost every day to get gas or groceries, and people think I’m some retired guy walking around. Eric was here, and we go to IHOP or Denny’s…and everybody recognized him. He signed a bunch of autographs, and we couldn’t eat. That’s one of the reasons I didn’t like the title ‘The Road to Escondido,’ because I don’t want to deal with that.” 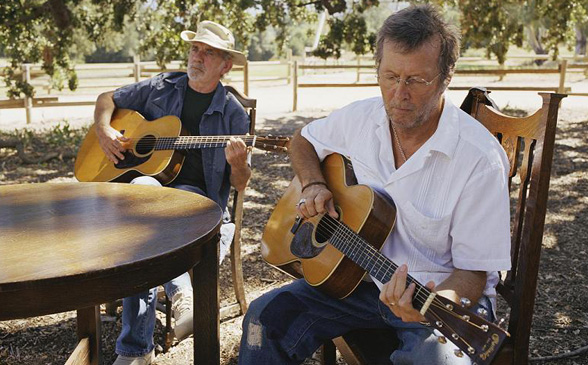 Of course, he was great about signing autographs after the two shows I saw him at (The Belly Up Tavern in Solana Beach and the Coachhouse in San Juan Capistrano).

Yet at the Coachhouse, this L.A. autograph dealer I hate seeing at shows – came in with lots of John Cale albums. I laughed, saying “You brought the wrong records, dude.”

There’s nothing more annoying than the folks that just want autographs that they’re going to sell on Ebay. That guy always shows up right as the show is ending, pushes his way to the front, and has drum heads and pick guards from guitars that he wants signed. When musicians see those items, they know you’re an autograph dealer. It’s the fans that have the records, CDs, and ticket stub for them to sign.

Cale signed those items for him, and he signed my records. We had a brief conversation, but I can’t remember what it was about. I do remember how funny it was when I went to his wife Christine Lakeland, a singer/guitarist that’s in his band, to sign my records. Her eyes got wide, she smiled, and said “Oh wow, thank you for asking me! Nobody ever asks for my autographs at shows, they just bug my husband. You just made my day.”

That blew me away, because she’s had a few great records, and has played with Tanya Tucker, Merle Haggard, and Hoyt Axton – as well as most of Cale’s records.

I was happy to make her day, since her and J.J. certainly made mine.

I’m thinking about her and her loss tonight as I write this piece on one of rocks underrated songwriters.