What do Taylor Swift and Spinal Tap Have in Common? When I was a DJ at a classic rock station, it really helped increase my cool collection of autographed CDs and albums. I thought about one of my old adventures when a Taylor Swift story came out in the news.

I was supposed to do an interview with Spinal Tap, as they were doing a new record and tour (for those that don’t know, they’re actors/comedians that did a fake documentary about a fictional heavy metal band).

It ended up only being Harry Shearer (The Simpson’s), but the interview went well. He stayed in character as bassist Derek Smalls and it was a lot of fun.

When the band came to town, they asked our station what kind of promotion we could do with fans. Aside from giving tickets away, our promotions guy came up with a great idea – I would pick the listeners up in a limo, but we’d tell them the limo broke down. It would be a Ford Pinto station wagon (for those young ones…the Pinto is often on lists as the worst car ever made, but my stepdad will argue that point).

We’d have a great dinner, sit front row for Spinal Tap, but we’d also let the two listeners help Spinal Tap find the stage. We had miner helmets with lights on them and flashlights in hand.

The two winners were thrilled by this all, and so was I. We were talking to Tap backstage, getting things signed. I had them sign a burned drum stick and my album, and I was bugging Harry Shearer with questions about a radio show he had done. He finally snapped at me. They were on the side of the stage waiting to go on, and I was still yakking away. He yelled,“I’m getting ready to go on stage. I need to concentrate on what I’m doing!”

He was totally right. I had just turned into one of those hardcore fans since I loved that movie so much. 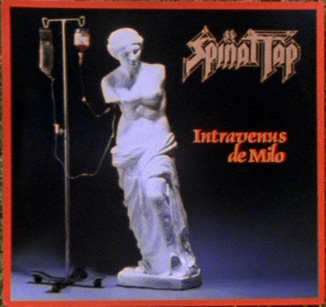 Anyway, as we got back to our seats, the fans were thrilled by the experience. I wasn’t as thrilled when one of them said “Why did we have to help them find the stage?”

It turns out this guy had never seen the movie. He wasn’t familiar with the famous scene where the band members get lost trying to find their way to the stage. I immediately thought about all the listeners we had that tried to win this cool prize. Folks that were huge fans, only to lose to a guy that heard the DJ say “The 10th caller now, wins…”

So when a radio station had a Taylor Swift contest to find the “biggest” fan, I could feel their pain.

It’s funny, because she had been in the news around the same time for leaving a $500 tip to a waiter, as well as two tickets to her concert.

Famous people often complain about having to sign autographs all the time, especially in restaurants. Well, Howard Stern once brought up something else that’s annoying at restaurants. Famous people are always expected to leave big tips.

But back to the biggest fan contest. Boston radio station KISS FM 108 had an online contest that would tally votes to find the biggest fan.

The first story I heard was that they ended up cancelling the contest after a 39-year-old man won. They apparently thought that was creepy, as most Taylor Swift fans are teenyboppers. I didn’t think that was fair (perhaps because I’m 43).

I did more research on the story, though. It turns out Charles had gotten the most votes by doing a self-promotional bid for votes on various websites. The station claimed he rigged the voting, too. I suspect it has to do with the posts he made soliciting votes. He said that his plan was to win, and then sniff her hair.

KISS FM had encouraged fans to vote (as they like the hits to their website). Yet people at a place called 4chan, found a way to infiltrate the contest. They said people should vote for Charles, a “fat old guy creep.” They stated: “help him crush the dreams of these girls and give him a chance to make a complete a** of himself by blatantly sniffing her hair with the cameras rolling.”

Since the contest was cancelled, Chuck didn’t get the free tickets or backstage pass. 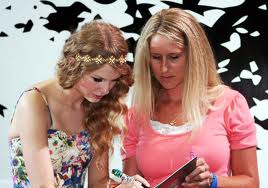 What baffles me is the Boston radio station cancelled the contest. Why not just eliminate him from it, and pick the person that came in second? Perhaps that would open them up to lawsuits.

Well, another contest our radio station used to do was called a “ticket upgrade.” We’d go into the cheap seats, and if we saw a fan wearing our radio station T-shirt, we’d give them front row seats. Surely they could’ve come up with something like that, so a lucky fan would get to meet Taylor Swift.

They could just keep their eyes on the fan, to make sure their nose stayed far away from her long locks. I wondered.  Do artist send signed CD's to radio stations as promo?