Golf with Phil Mickelson, or film with Larry David

Here in San Diego, I found out about an interesting charity item. Charitybuzz.com has a listing for a group of three to play golf with Phil Mickelson, at his home course in Rancho Santa Fe. A few days ago, the bid was over $100,000. Oh, in case you think that’s a bit pricey, keep this in mind -- it includes lunch. The charity is raising money for Operation Healing Forces, which serve the needs of active-duty and recent-veteran wounded, ill, and injured Special Operations Forces and their spouses.

I remember when a friend I knew decades ago called me up, telling me about his divorce. We went out for dinner, and I found out his good friend is friends with Mickelson, and he had been to his house many times. I’m not a golf fan, but I asked if he could score me an interview or autograph from him. He didn’t seem thrilled with me requesting that. Oh well. You have to ask. Anyway...the charity has a few other golf offerings -- you can walk alongside PGA player Scott Brown during a practice round, for a mere $1,000. There are also bids for playing at Pebble Beach. If you don't mind spending the big bucks -- lunch and golf with Bill Murray -- is currently around $35,000.

Some of the things I can’t figure out how they’d even do. For example, there’s a bid of $12,500 for travel to anywhere in the world, where your favorite film was shot, and you can star in a remake of a scene in that movie. That includes roundtrip airfare, but I’m guessing...not the co-stars of that movie. 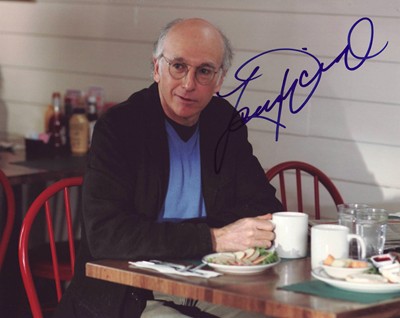 What I’d love is having a walk-on role in “Curb Your Enthusiasm” in L.A. and hanging out with Larry David. That’s over $31,000, but for fans of the show with a lot of money, well worth it.

For autograph collectors, they have signed guitars from Slash, Greg Allman, Les Paul, as well as tickets and a meet-and-greet with Cher as well as Sheryl Crowe.

You could also have lunch with Ed Asner which is a lot cheaper -- $650 is the current bid.

how much would you charge for lunch josh?

Hahahhaa...well, it's funny you say that, Robert. We had a newscaster at the TV station I do movie reviews for, and he died of a brain tumor. During a fundraiser for him, people were auctioning different things. I auctioned off dinner for a couple with me, and a limo taking us to the restaurant and to a movie screening of their choice. One of the newscasters kept ribbing me on the air saying "Win a date with Josh Board." Anyway...I "went" for about $1,800 if memory serves. And a friends restaurant donated the meals, and a limo company I called provided their services for free.