When I started to write my blog articles, I decided that my posts are going to be personal, interesting and funny stories which happened to me when I met my heroes. This is going to be my last blog post for some time - because it´s the last story which deserves to be written about. It´s going to be last one till the moment when something new and extraordinary will happen in future. First post was about Deep Purple... and this one is going to be about this band too - because it´s the best story I have ever experienced with any "star" or "famous person" or whatever we can call it... I would recommend you to read my first blog post about them (just to be introduced into the whole context and introduction story).

When I met them for the first time in 2006 I was in sheer awe that I wasnt able to talk with them about anything reasonable. I felt that it was a bit awkward when we were unable to chat with them reasonably because Roger Glover asked us to give them questions and simply chat with them, because they like to do that with their fans.... My buddy was asked by Roger (in friendly way) "how have you got here?" (meant to backstage) and my buddy answered "by car..." - that´s how our chat looked like at that time. :) Language barrier and that suprise caused by their friendly attitude led to the situation that we simply didnt know how talk with them - you cant talk with rock heroes like with your friends in the pub, can you? Finally - our dates came in. Opening gigs of fall European tour... We got to the venue way before usual time so we had a chance to hear parts of the soundcheck outside the venue - couple of things sounded very promising because they have never been played live before or they have not been played in long years, but it´s just soundcheck - who knows what they will do during real concert. Some issues with picking up the passes, but we got them! Let´s go in and let´s enjoy the show! Horrible support group ended and then - last waiting for our band number 1! Familiar introduction ends up and then - what a SHOCK! Are you f...ing kidding me?! I think that everyone of us awaited Highway Star as standard opening number (which was 1st one on previous concerts), but it´s not HIghway Star - Roger starts to play that characteristic bassline.... world concert premiere of Hard Loving Man?! 40 years old song performed for the first time EVER on stage and I´m watching THAT moment! WOW.... Then - right in the middle of the show - Almost Human from late 90s - performed for the first time in decade... This wasnt setlist for general "classic rock" audience, this was a setlist from heaven made for us - hardcore DP fans (6 of 18 songs from SM era and three other deeper-cuts!). It cant be better than that - and what´s going on now? Yes - let´s go to meet the band!

Now I have to describe the room where meet&greet actually happened, because it´s very important for upcoming moments. It was huge room with tables placed in circle around the whole room - and everyone of fans who got there put their things on those tables - jackets, bags, merchandise, albums etc. I had just couple of things for signing with me, because I didnt want to bother them with a lot of signing, I mainly wished to talk to them and also - I had a special little present for Roger Glover (one book related to our national cultural history). I prepared all things for myself - I removed booklets of albums from jewel cases and left those cases (with CDs inside them) on our table. Then... it all started. Band members came in - signed stuff for us and we got into chats - about the show, about very suprising setlist, about new stage rig etc. We briefly talked with Steve and Don and then we got into longer chat with Roger. I gave him a little present - he was very pleased by that and told me a story from life of rock musician - as a touring musician you have to travel light because of flying and that´s the reason why he rather gets books or something small like that (stuff you can have in your bag or pocket) than big or heavy things - and he said that he doesnt know why but usually they get bottles of alcohol from fans and that he hopes that fans dont try to indicate "something". :)  He even told me a story from one Russian airport - some fans gave him huge bottle of red wine (he gestured about one meter wide with hands) but because he just arrived - he had a luggage in his both hands - what to do with such a huge bottle now? It ended in unexpected way - ladies (who gave him a present) carried the luggage to his van and he carried this huge bottle of wine! Then we started to discuss something else when my friend tapped my shoulder and said: "hey, look!" - I turned around and I could not believe my eyes.... Just imagine that situation. I turned around and saw Steve Morse standing next to our table examining my jewel cases - just imagine yourself in music shop when you search for something and you are going through albums, looking at the CD cases (ummm nice cover art, what songs are on it.... etc) and trying to find the one you want to buy. It looked EXACTLY like that! Then - language barrier striked again..... I had no idea how to react in this situation (and to be honest, I dont know that till today what would be proper reaction for that moment) - I went to Steve and told him extremely silly thing: "what can I do for you?".... He looked at me - slightly confused and when he finally comprehended that those CDs are mine he just asked me "do you have really everything signed by me? I can sign you those CDs (and he really meant discs!) if you want..." - that question suprised me, but I was able to say that he already signed everything I wished to me and that I thank him very much for that. M&G ended and during my way back home I just thought to myself how silly reaction from me it was - but in fact I didnt find better way to react. 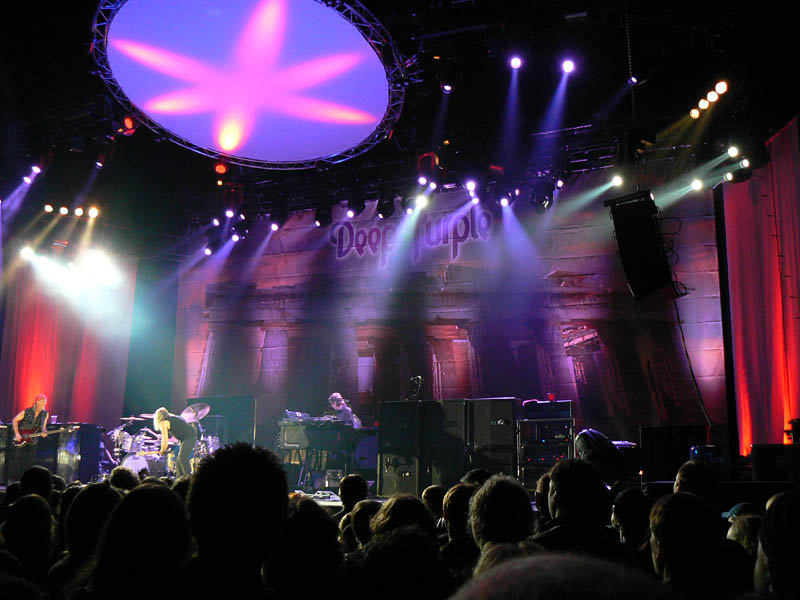 Second day, trip to my friend´s beautiful hometown and another show. Luckilly we found photolab to print photographs with band from previous day to get them signed. This time - the show was even better one, no shock caused by suprising setlist, but the show itself was much more "clean", without mistakes.... especially in case of newly added songs. After the show - I got a bit worried - they are going to see us there for the 2nd time in row - "how will they react?" - that was main question going through my mind. Everything was more than fine! Roger even asked us how we saw the differencies between both shows and admitted that the second one was better one from his position too. Steve joked about the pictures from previous day  (they seemed suspiciouly recent to him...) during signing and Don was very happy to chat about his solo stuff. M&G ended again - every fan attending this meet&greet was more than happy and pleasantly suprised again. And I had to travel back home next morning - trying to summarize those unique moments of life of music fan. We (me with small group of my closest "concert friends") met band members of this band couple of more times - we finally met Ian Paice last year (he wasnt participating on these meet&greets) and he thanked me for lending a marker to him to sign our stuff.... We met and even had a chance to make an interview with Don Airey - what a stunning storyteller he is. It´s really great feeling to know that your favourite rock stars who sold milions of records are actually very friendly guys and that you can talk about very funny stories that happened to you when you met them. Absolutely NO sign of self-importance, arrogance - just five guys who are happy that their job is actually their favourite hobby and that they can share their happiness and undeniable talent with audience. BTW - see you soon again guys!

Thank you very much for a wonderful story! That is the type of experiences I really like to hear about with fans and their heroes! Awesome!