My Quest to Get Bruce Springsteen (or anyone in his band)

I’ve been on a quest to get my wife some Bruce Springsteen autographs. I make that plural, meaning...from the Boss himself, or any of the musicians in his band. Now, she’s not even into autographs. In fact, the only time I ever saw her excited about meeting somebody famous, is when she attended an event with me and got to take a picture with Rami Malek (pre-Freddie Mercury), because she liked the show “Mr. Robot”. But she’s from New Jersey, and it’s required that you love Springsteen. I was disappointed with the folks here on this Autograph website, because when we made the 2 ½ hour drive to L.A. for his last concert at the Sports Arena, I asked for help in getting the autograph. A few people here got him to sign going in, but never gave me the heads up on where to go. Another person on this website, offered to sell me a Springsteen photo from their vast collection. I was all set to pull the trigger on a signed Jackson Browne/Springsteen photo, and it turned out they were forged and he was called out on it.

When I proposed to my wife, I reached out to some E Street Band members for their help. Drummer Max Weinberg...that was the worst experience. His manager didn’t want to help, and all I wanted from him was a drumstick that said “You should marry this guy.” I said I’d pay for it, but when he said Max doesn’t entertain any offers under a thousand dollars...I dropped that idea. Hell, I still had to pay for a nice diamond ring!

I had no luck with any of the other band members, so what I did was hire a Springsteen tribute band singer, and changed the lyrics to “Little Girl I Want to Marry You” (from “The River” album), and changed the lyrics about us. I offered the singer of the band a few hundred bucks, and he did it. The funniest part was picking up the disc he recorded it on, and people approaching us asking for his autograph, thinking it was the real Bruce Springsteen.

And it all worked out wonderfully (and our anniversary is coming up next week, too; please, no gifts).

Anyway, Springsteen’s longtime guitarist Little Steven was playing a show at the House of Blues in San Diego the other night, and I got her tickets for her birthday. She surprised me by saying, “Did you want to try to get his autograph before the show?”

Ah….I’ve married the right woman! She had a few Springsteen CDs he was on, but I wanted to get a Southside Johnny and the Asbury Dukes, and was lucky enough to find one at a record store I frequent (for the low, low price of $3). I assured my wife I knew the side entrance the musicians go into, and it would be easy. But parking downtown is always tricky,and we drove around looking for 20 minutes. We found a spot, but I had us walking in the wrong direction. We realized it about 10 minutes into the walk, and turned around. And as we were about a block from the side entrance, we see Little Steven Van Zandt walking into the club, flanked by two guys. I wasn’t positive it was him, or I would’ve yelled his name out. And...we stood there for two hours, and he never came out. Matters were made worse by the fact that it wasn’t just the band doing a soundcheck. On this tour, Little Steven wanted to go all Oprah, and do something special for teachers. So about 100 teachers lined up, and got to go in for an hour long seminar on teaching music and the arts. We entertained the notion of lying and saying we were teachers, but it looked like they had an elaborate list and wrist bands. And the idea of lying in front of a teacher, would...have made all my old teachers over the years disappointed. Even if they weren’t there to witness it. I ran into a friend of mine that was going down to interview him for a documentary he’s doing on a popular recording studio, but I didn’t want to bug him for the signature (which I surely would have if it were Springsteen). Some journalists also think it’s unprofessional to do that (I feel that way, too...but I usually don’t let it stop me).

I thought about how I even contacted the original drummer for Springsteen (his nickname is “Mad Dog” but I’m too lazy to find out his real name right now). I offered to give him a few hundred dollars for a signed drumstick helping me out with the proposal. I never heard back from him.

But hey...it’s too late for thinking about all the things that didn’t work. The woman was dumb enough to say “yes” and marry me...now we’re watching a terrific concert together. 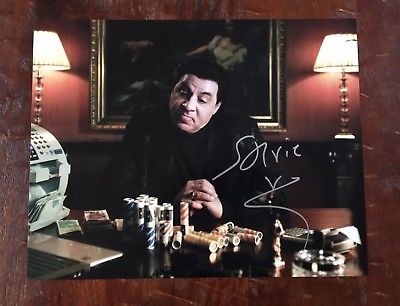 Little Steven and the Disciple of Soul, put on a great two hour show. My wife still gives me a hard time for complaining about the Springsteen show in L.A. I felt it was too long. It was 4 and a half hours! That’s just...too long to be standing. I don’t want to do ANYTHING for that long (I so wanted to use a Sting joke right there).

Maybe someday I’ll get her a Springsteen autograph, or we’ll meet one of the E Street Band members. Until that time, we’ll just be relegated to meeting the Springsteen impersonators in tribute bands. 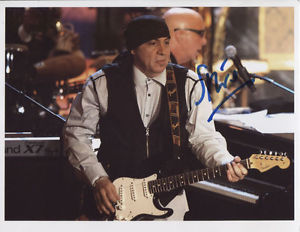 Not only did Little Steven put on a free workshop for teachers, but he also let them attend the concert for free!  Being a teacher, I really appreciated the gesture and I've been using his website for the past couple of years in my History of Rock and Roll class.  I'm glad he "went all Oprah" and openly supports teachers, and actually does something for them!

After the show in Cleveland, he came out and signed for everyone there.  I'm sure he would have done that for you too.

Since Bruce has been on Broadway, many of the E Street members have been doing solo tours.  Luckily, most of them have come to Northeastern Ohio and I've gotten to meet Nils, Steven, Max and Garry Tallent. Vinnie "Mad Dog" Lopez has made several stops at the Hall of Fame several times over the years.  I never met him but did get a friend to get his autograph for me, which is always nice.

Nice tale...you'll eventually get something signed.

But it's Jukes, not Dukes...the Asbury Jukes.
A reference to the great blues harp player Little Walter in the name (and there are other meanings).Hope your wife didn't see that.

Steven has written so many great songs for the Jukes, as well as his own band. He's one of THE most under appreciated songwriters around.

Dang it!! Thanks Sidney. I think I was thinking about Ted Nugent and the Amboy Dukes. Nice info about Little Walter. Love that guy (I highly recommend you see the movie Cadillac Records, which has a Little Walter segment).