December was a very slow month for me as I only attended one show (Will Hoge- who is a great singer-songwriter!).  I ended up having hernia surgery (they found six in my stomach) so that slowed me down for a couple of weeks.

January came around and I decided to put into shoot Rick Springfield's concert which was about an hour and a half away from my house.  A little far for me, but I was jonesin' to go to a show.  Rick Springfield is more than "Jessie's Girl,"  he is a great guitarist and his shows are funny, entertaining and he has a catalog of hits to fill a 90 minute set.

After the show, my buddy and I waited out back for a few minutes to see if we could catch Rick.  It was particularly cold Ohio night and my friend and I gave up after a few minutes.  We decided to have a quick after show beverage before heading home.  Well, guess who happened to pop in the Italian restaurant after the show??  Mr. Springfield and his crew!  There were a few patrons waiting in the bar and his manager came over to grab a drink and I overheard one of them ask if they could take pictures.  He said, wait until after dinner and he will take pictures with everyone.  So my friend and I waited in the bar and then headed to the car to get my Live Aid poster and album for Rick to sign when he was finished with dinner.  He was very nice, signed our items (we were the only one's who had anything) and took a picture with us.  He was very nice to everyone.  Sometimes you just get lucky! Next up was Gabrielle Union, the actress who happens to be Dwayne Wade's wife.  She was at a Cleveland book store doing a talk and book signing.  Dwayne and Channing Frye were there for the Q & A but left before the signing.  The store said "no posed photos" but Gabrielle was more than happy to pose with each person after she signed her book.  Dwayne is a lucky guy! The Romantics and Berlin were in town for a one-off concert.  We were told that The Romantics were going to be at the merch table after their set so a pretty decent line assembled when they were done.  After about 20 minutes of waiting- as Berlin were about to take the stage, we were told they would come out after Berlin's set.  When Terri Nunn (who looks and sounds fantastic!) was done- I headed straight to the merch table to find lead singer Wally Palmer wandering around the lobby.  I asked if he could sign my ticket and take a quick picture, which he willingly did.  I decided to then head out back to see if I could catch Terri while a couple of friends waited for the Romantics inside.  As it turns out, only two of the guys made it to the table and Wally was wandering around the casino (he was a little drunk).  So I was lucky to catch him.  I never did see Terri leave the venue but she tweeted the next day that they went to the Rock Hall.  Oh well, can't catch them all. 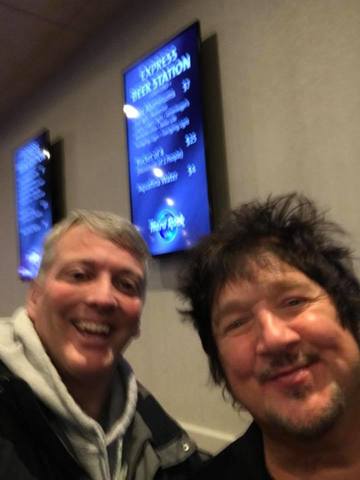 The following day I got to shoot Grand Funk Railroad at the same venue.  Even though original bassist Mel Schacher wasn't there, Don Brewer and the rest of the guys (Bruce Kulick-Kiss, Max Carl-38 Special and Mel's replacement Stanley Sheldon-Peter Frampton) rocked the house!  Afterwards, about 8-10 fans waited out back for the guys to come over.  A security guard came over to us and said "I just talked to the merch guy and he said they probably won't sign.  You are welcome to stay but it probably won't happen."  Literally two minutes later out walks Don and I asked if he could sign a few and he heads right to us!  That's why you never listen to managers or security- it's up to the artists to sign!  Bruce Kulick came over too and they both quickly signed for everyone there.  It was pretty cold so they did not take any pictures but I was happy to get them on the set list and Bruce on my Kiss program and Don on my over-sized drum stick. Finally, my friend decided to buy Gene Simmons Vault Experience and asked me to tag a long with him to Detroit last weekend.  You can read about my entire experience here:      www.northcoastmusicbeat.com/gene-simmons-vault

Gene was very nice and signed some items for both of us. February looks to be a little bit busier as I have Loverboy, Bobby Knight, Black Label Society, 3 Doors Down, Collective Soul, G3 tour, Noel Gallagher and Kid Rock on my calendar.  We shall see who I can get.

Great articel. Love it. Let us know how it went with G3.

I got the singer of Grand Funk on a few albums.

Teri Nunn....sexy as hell. Got her after a show, and she's super nice (only original member of Berlin, I believe).

I missed Mark Farner (singer GFRR) a few years ago.  Well, I didn't miss him, he walked right to the van and didn't stop and sign.

Yes, Teri is the only original in this version of Berlin but she said two of the original guys and her are finishing up a new album and plan to tour this summer.