Adding A Few In February

February was pretty cold in Ohio but I still managed to add a few.

I don't normally collect basketball but when Bobby Knight returned to his high school for a fundraiser for the local YMCA, I couldn't pass it up.  For a donation, you got to hear Bobby tell stories about his high school days as well as things from through out his career.  He stayed after and signed everything for everyone that wanted an autograph.  He really seemed interested in the fans and asked questions while he signed. As mentioned before, The Rock and Roll Hall of Fame puts on different programs throughout the year.  This year for Black History Month, they brought in DJ Yella from NWA and Lil Eazy-E for an interview and performance.  Afterwards, both guys were more than happy to meet fans, take pictures and sign autographs.  I was the only one who brought some NWA vinyl and of course I had to bring my HOF poster. 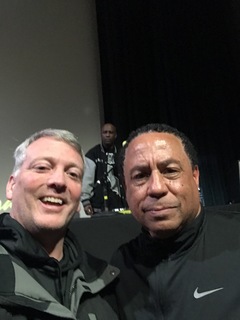 Next up was G3 featuring Joe Satriani, John Petrucci and Phil Collen from Def Leppard- not the drummer for Genesis.  After the show John Petrucci came over to the 10 or so fans that were waiting and signed and took pictures.  He said- "Did I get everyone?" before he went to the bus.  Phil Collen was next to come out and came right over to us.  He also took pictures and signed for everyone.  Finally, Satriani come out and he totally ignored us and went right to the runner van.  This is the second time in a row that he hasn't signed for fans.  And I had heard that he is normally great. The next week, Vivian Campbell's other band- The Last In Line- who play Dio music, were in town.  My friend took my custom drum head that Phil had signed and got Vivian to sign it too.  Now I'll I need are the other 3 guys in Def Lep to complete it.  They are in town with Journey in May but I hear they are tough.

Noel Gallagher, who was in Oasis, played a solo show to end the month.  I heard that he signs before the show so I decided to go early.  There were about 20 people in line when Noel arrived.  He walked to the end of the line, started signing there and made his way back toward the entrance of the venue.  He signed everything for everybody and took a few selfies.  When I asked if I could take a pic, he said "Make it quick" but he never looked up.  I did get him on two items at least. 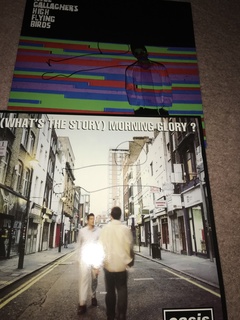 There you have it.  Spring is right around!

I got Joe Satriani a few times. He was always super nice (horrible looking signature, though). He probably got tired of autograph dealers, as they all do

Here’s the thing- a guy beat him to the hotel and he signed 18 things for him!! Why would he blow off fans at the venue but sign for someone who had 18 things at the hotel?

Satriani and Petrucci left around 1:15am escorted by 4-5 security guards and went straight to the bus here in San Diego. They did not acknowledge the group of about 7 people waiting outside, I suspect that has something to do with the fact that they were selling $300 tickets for the "VIP Meet and Greet" for this show. Satriani has been like that latel, but I never expected that from John! I was hoping to get my "Images and Words" LP signed, I will have to try again. At least I got Mike Portnoy on it a couple of days later at NAMM.

Phil Collen on the other hand was very nice, he left earlier and signed for me and a couple of other people. I only brought 1 CD cover for him.