Not Wanting to Bother Famous People -- the CHIPS Edition I was listening to KFI 640 AM, a Los Angeles radio station. I often like to listen to “talk radio” when I’m driving, but have no interest in hearing people discuss politics. They have a lot of shows with interesting hosts, and they delve into other topics. Yesterday on the “Gary and Shannon” show, Gary talked about being starstruck. His son was selling a truck, and he wanted to be there, since it was going to be the first vehicle his kid ever sold. He wanted to make sure everything went well.

The guy that came up to buy it, also brought his father. The father was Larry Wilcox, best known as Officer Jon Baker on the show CHiPs. Now, what made this story so fascinating to me, is how starstruck Gary was, and how he handled that. It’s something my mom has done, too. And that is...ignoring the fact that you recognize them, thinking that’s what they want. IT IS NOT what they want!! I can say this as somebody that has been on TV and has been recognized. It’s a wonderful feeling. For example, I was once coming out of a movie theatre, and this guy in his 80’s approached me and started yelling, “You’re that movie critic I see on TV!”

As I smiled, he got into my face, and was furious that I gave one of the Harry Potter films a bad review. His son tried pulling him away from me, but I enjoyed the conversation. Nothing wrong with giving a critic crap for not agreeing with them. Of course, that wasn’t as good as the time I was on a first date, and after dinner and watching a band in the bar, the bartender started freaking out about how he recognized me, and that he was going to give me all my drinks for free. The woman was impressed, and I saved money on drinks! (of course, I also had to leave him a big tip).

But enough about me. This is about the star of CHiPs.

As Gary told the story, they were negotiating with his son. He walked around the corner, and Googled Larry Wilcox, just to see some current pictures. He was sure it was him, but again, he said nothing. After the deal was done, it was Wilcox that told the kid, “You might get a kick out of looking my name up later. I used to be on a popular TV show.” The kid asked what show and when he said “Chips” the kid said, “I think I’ve heard of it.” That’s when Gary said, “Yes. Of course we’ve heard of it.”

Before he said that, though...Gary tried to be sly. He said to Wilcox, “This is the first car my son has ever sold. I’d like to get a picture of you with him.”

Now, why not just say “I loved your show when I was growing up, and it would be an honor to get a picture with you.”?

He would’ve loved hearing that and been honored. What he wouldn’t have liked, is if you said, “Why are you guys trying to talk us down on the price of this truck? You’re a famous TV actor and obviously have money!”

Heck, as Shannon even said to Gary on the show, “He was practically begging you to mention it.” What confuses a lot of people when it comes to famous folks is...when they don’t want to be bothered. If they’re at dinner with their family, they don’t want you coming over to ask for a selfie. If they’re at Disneyland trying to enjoy themselves, wearing sunglasses and a hat, hoping to not be recognized -- they want their space.

My friend runs a hotel in a touristy part of San Diego. Wilcox’s co-star and partner on the show -- Erik Estrada -- came to stay at their place for weekend. He told the staff he didn’t want to be bothered. Although, I found it odd that he showed up in a yellow Rolls Royce. No better way to attract attention than that, but...you can understand why a star might say that at a hotel. I once found out about Carlos Santana staying at a certain hotel. He’s a notoriously bad autograph signer, but I figured...I could catch him at the hotel instead of the sports arena he was playing at. I showed up with the one Santana album I owned. Once I saw 8 other autograph dealers there, I split. That was partly because I had my 7-year-old daughter with me, but also knowing that he wasn’t going to want to sign for a crowd, and he’d probably be a bit peeved that the hotel let information out about him staying there. I mean...how else would anybody have known? 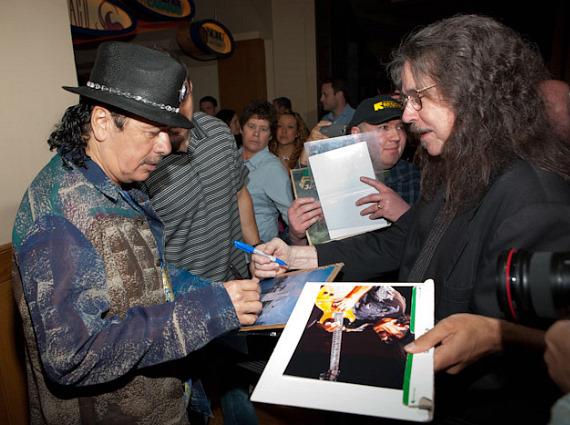 I’ve said before, what’s bothering these celebrities is all the selfies everyone wants to take. But recognizing somebody, complimenting them on their work, and asking for an autograph….it probably thrills them. Unless you’re Paul McCartney or Jack Nicholson -- people that have to deal with that every few minutes -- they’re going to be thrilled by it.