Want to Buy a Collectible Car? I’ve written about cars before, and I’m always a bit perplexed with a car sells for millions, merely because it was used in a movie or once owned by somebody famous. Now, I’m not saying I’d kick an original Batmobile out of bed….errr….out of the garage. It’s just odd that some people think these cars are worth so much. Remember the Seinfeld episode where Kramer owned a car that once belonged to actor Jon Voight? I’d think it would be more like that.

Anyway, two car stories popped up today, so I thought I’d tell ya the details. Who knows, you may have millions laying around that you want to spend on another vehicle that will take space in your driveway.

The 1997 GMC Suburban that rapper Biggie Smalls (aka Notorious B.I.G.) was shot and killed in, is going to be sold. Currently, the police have the door, which is riddled with bullet holes. They promise to return it to the owner. They merely needed it for evidence.

It has 114,000 miles on it, but I’m guessing it’s the one time a person will buy a vehicle and not be concerned with the mileage. 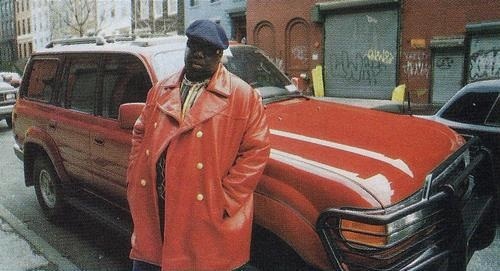 Apparently, a woman bought it for $10,000 at a police auction, needing a bigger vehicle for her family of six. It wasn’t until recently that she learned about its history. That’s when she decided to contact “Moments in Time” and make a little cash.

In what could be the deadliest auction ever -- the company is also selling Tupac Shakur’s car. He’s one of the rival rappers of Biggie. Tupac was also shot to death. I’m guessing if you drive one of these vehicles around, the odds of you being involved in a drive-by shooting increase dramatically. But I digress.

Now, if bullet holes in the door and seatbelts aren’t your thing, perhaps you’re more old school and you prefer “Bullitt” to “bullets.” Well, you’re in luck.

It was 50 years ago that we were all mesmerized by the ‘68 Mustang in the Steve McQueen classic “Bullitt.” It has what many film critics say is one of the best car chase scenes in movie history. That Mustang was recently found in a junkyard in Mexico.

Many experts have looked at the car, and there seems to be no doubt on its authenticity. The car was discovered in Baja by a man named Hugo Sanchez. It had a white body that was rusted and rotting away. The original drivetrain was gone. The vehicle was the main stunt car used in the vehicle, and sent to the junkyard right after the filming wrapped. It’s no longer green, and has had a few layers of paint over it. It was going to be turned into another movie car -- “Eleanor” the Mustang from “Gone in 60 Seconds.” Once they found out about its origins, plans changed. Since the film studio used two Mustangs, and one of them is privately owned, that makes this a nice collectable.

A few of the modifications made for filming have been preserved. Those would include strut tower reinforcements and holes drilled into the trunk for auxiliary power cables.

Garcia is starting to repair the car, which is now painted green like the original. He had it shipped to Paramount, California, where he’s going to display it at a shop he’s opening. He has been offered money for the car, even when it was in it’s ratty condition. He isn’t planning on selling (at least not yet). I’m guessing a million dollar offer could change his mind, though.